The Animal Justice Party – a party with a difference

They have no policies on economic growth, education, economic reform, taxes, workers, health, jobs, senior Australians, immigration, asylum seekers, Aboriginal affairs, globalisation or Australian businesses. Their clients are the animals we share our society with. They are the farm animals, wildlife, pets and working animals.

Policy coming soon on the environment, and one needed on population.

The Animal Justice Party was formed as a response to growing public concern about the neglect of animals and animal protection issues by political parties. Its aim is to give a voice to those who cannot speak for themselves - animals. It will provide a focal point for voters frustrated by the lack of political action and who feel strongly that much more needs to be done through our parliamentary systems to assist the wellbeing of animals.

The members see that there is a need for laws and processes which recognise animals’ needs and capabilities which protect their interests, whether they are domestic, farmed or wild. The Animal Justice Party will also ensure such laws and processes are properly enforced and implemented to achieve genuine justice for animals.

Members of the AJP believe that animal cruelty is an unfortunate and all-too-common feature of Australian society that must come to an end. Several non-government organisations have been tackling animal welfare issues at ground level from various perspectives to-date, however there’s an immediate urgency to bring much-needed influence to this agenda from a government policy dimension. 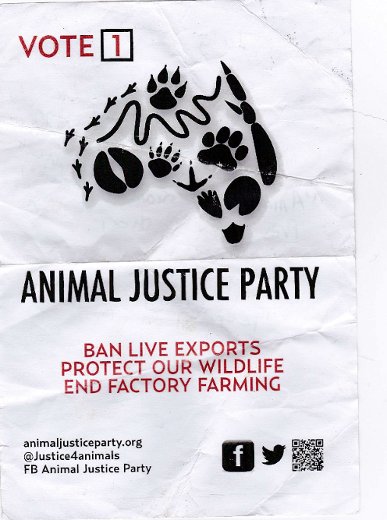 The Animal Justice Party has been established to give voice to those who have none – to pursue the vital issues of animal protection through the Australian Parliamentary System by:

The Animal Justice Party values the lives of all beings, human and non-human. It views animal lives as having an importance beyond the simple biophysical, and as deserving of our respect, kindness and understanding. The AJP does not see the value in animal lives as being determined by perspectives on consciousness, human utility, or the narrow quantitative determinism of much science and conservation.

The AJP recognises that many governments, institutions and individuals do not appreciate that living beings of all kinds have lives of meaning in their own right.

The Animal Justice Party stands 100% against the live export of our animals to other countries beyond the reach of our laws and our influence. Once again we see horrific cruelty to Australian animals.

The AJP have asked the Minister responsible for live exports, Joe Ludwig, to resign after the latest expose from two abattoirs in Egypt. Under our Westminster system, he is responsible for these atrocities, and must take responsibility. We are also looking at our legal options. We have laws against animal cruelty, and it seems that putting animals on board a ship where there is a good chance they are going to be subjected to trauma and distress is a breach of those laws.

This is another example of the Government's failure, lack of care, and that you will be voting for the Animal Justice Party rather than Labor.

AJP's plan is to get rid of anyone in Government who would inflict such cruelty on animals. The current opposition are no better on this, in fact, they may be worse!

Just a few days ago Julie Bishop promised to apologise... to Indonesia, and resume the live export trade at full speed if the Coalition win the elections. If an apology is due, it is to the animals who suffer and die needlessly under this cruel policy. 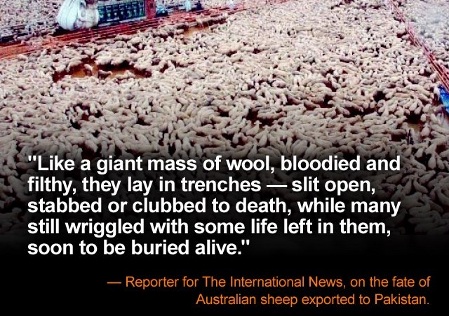 Kangaroo Slaughter in the ACT

For a number of years the current territory government has been slaughtering Kangaroos in an ugly cull. The minister for the environment and speaker, The Greens Shane Rattenbury MLA, is part of the government that authorises these culls - despite the Green's "animal welfare" policies. The AJP are doing everything in their power to lobby The Greens and the ACT government to halt this slaughter. Through the political process, they can apply a unique kind of pressure to sitting politicians, and we hope to put an end to this disgusting and unnecessary practice.

Over concern about the way intensive (factory) ‘farming’ adversely impacts upon the well being and welfare of each individual animal in such establishments, the Brambell Committee of the UK Farm Animal Welfare Council developed a list of five freedoms which all animals these animals have a right, supported by most  animal protection organizations around the world including advisory councils such as the Farm Animal Welfare Council which advises the EU and British Parliaments.

They are:
1.Freedom from thirst, hunger and malnutrition – by ready access to fresh water and a diet to maintain full health and vigour.
2.Freedom from discomfort – by providing a suitable environment including shelter and a comfortable resting area.
3.Freedom from pain, injury and disease – by prevention or rapid diagnosis and treatment.
4.Freedom to express normal behaviour – by providing sufficient space, proper facilities and company of the animals own kind.
5. Freedom from fear and distress – by ensuring conditions that avoid mental suffering.

The Animal Justice Party supports these five freedoms and believes that these must also apply to the transport, handling during transport, lairage and slaughter of animals. While slaughter of animals for food remains lawful, animals that can not be killed by gunshot or captive bolt stunning ‘on farm’ must be transported the shortest distance possible to the abattoir.

The Animal Justice Party (AJP) will be fielding 10 candidates including 6 women, for the Senate in the September Federal Election in a bid to ban live export. According to Animal Justice Party: “We are opposed to the live export trade, as are the majority of the Australian people. The fact that the major political parties ignore the people’s well formed opinion is staggering.”

“If the government will not get rid of live export, the people will get rid of the government. That the opposition leader, Mr Abbott, has promised to expand the industry and apologise for suspending it shows callous disregard for both the animals and the electorate,” said Animal Justice Party.

“The Gillard Government’s own self-acclaimed livestock export monitoring system has now been shown to be completely useless, as we all expected it would be. It’s time Minister Ludwig resigned. Its time these major parties put the well-being of animal lives ahead of losing votes in certain sectors of the country and bowing to a ruthless industry.”

Rallies, emails, letters, public outcry are all to little avail and the numerous “incidents” keep shocking the caring public.

Is the Australian Government doing enough to protect the welfare of our live exports? Yes, the government is doing all it can to improve standards. It’s very hard to police. No, the government need to step up its pressure overseas. We can do better. VOTE

Shane Rattenbury, a minister for the local government that manages the territory around the Australian capital, Canberra, said he bumped into a kangaroo early Thursday as he was running along the side of a hedge in a suburban neighborhood. "I didn't see the kangaroo, and it didn't see me," he says. He had to seek medical attention for gashes to his left leg. Kangaroos are common in the area and don't usually threaten humans. Although kangaroos don't usually pose a threat to humans, authorities in the Canberra area have undertaken annual culls to control the animals' numbers for environmental reasons. Rattenbury's political party, the Greens, doesn't oppose the policy. "The cull has been very controversial," he said. "It's undertaken on the basis of science that indicates there is an overabundance of these kangaroos in the region." The Greens "continue to monitor that science and look at whether this cull has delivered the desired impacts," he added. This incident, and Rattenbury's support of kangaroo culls, has done damage to The Greens. While there are many Greens candidates who do care about kangaroos, there are still many Greens who are not and turn a blind eye to the alternatives when it comes to the kangaroo issue. That's why the Animal Justice Party is important. Maybe it's time for a people cull! Too many politicians are encroaching on the habitats of wildlife, and kangaroos are especially vulnerable to vitriol. Pity there aren't carnivorous mega fauna in Australia, like Grizzly bears and lions, to launch an attack on Capital Hill!

We are pushing roos to fight back we should be ashamed

kangaroos don't usually attack humans, but they do defend themselves when cornered. Humans, through so-called culls and through shooting and torture incidents, and most of all by building all over these animals' habitat, are attacking the kangaroos. It is indicative of the intelligence and sentience of these animals that some are now returning the insult. If the humans involved in pushing these animals over the edge had any decency they would see that we have caused this. How tragic and how ugly and stupid our actions towards these gentle family animals.