This article assesses Australia's economic performance by comparing it to a publicly listed company with the population considered as shareholders. Evaluated in this way Australia's management makes for a very poor return to shareholders. 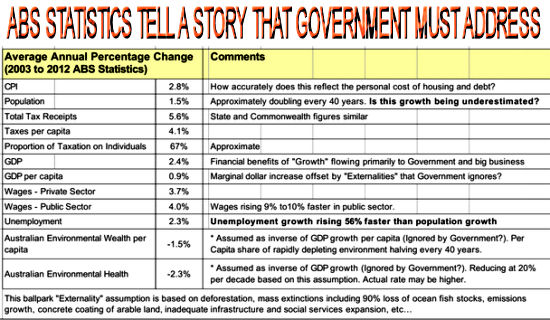 The Analogy between Australia and a failing Publicly Listed Company

A Definition of Dilution

“A reduction in the ownership percentage of a share of stock caused by the issuance of new stock. Dilution can also occur when holders of stock options (such as company employees) or holders of other optionable securities exercise their options. When the number of shares outstanding increases, each existing stockholder will own a smaller, or diluted, percentage of the company, making each share less valuable. Dilution also reduces the value of existing shares by reducing the stock's earnings per share.

Dilution is very common in small start-up mining companies as they repeatedly complete exploration expenditure without making any discoveries. They have no income and must repeatedly issue new shares to raise more. Each time, the dilution reduces the value of each share.

They seek additional investment in new share issues from both existing and new shareholders, typically based on the hope that the next exploration expenditure will have a positive outcome.

Eventually such companies either prosper or fail. If they never generate income; they fail.

Explanation of the Analogy

If we look at Australia, a simplistic analogy is that the "shares" are the people. Dilution is analogous to population growth. If population growth continues to cause negative social, environmental and economic outcomes; it is inevitable that Australia will fail.

The reason this is the likely outcome is quite clear if the "human capital" raised by relentless, rapid dilution does not cover the cost of the dilution. For example, say a company wishes to raise $1 million, but has to pay $1.5 million to the broker who arranges the deal! Such behaviour would reflect the abject stupidity of the corporate management team.

I argue (as have many Australians before me) that in Australia, the cost of raising "human capital" by dilution is far greater than the money received. Australia has got away with this so far because it issues government debt which has a dollar value (the tip of the iceberg), and accumulates huge quantities of concealed Externalities that form the majority of the debt. But this can't work for much longer. Government is driven into this strategy by "encouragement" from other businesses that profit at the expense of Australia - without suffering the negative financial consequences themselves. And, of course, the Economic Advisors explain the need for GDP Growth...........with near total disregard for any "Inconvenient" Externalities..............

Warren Buffett would probably never invest in a company that performed like Australia; because it doesn't pay any dividends, it relies on endless "share" dilution to survive............and the environmental book keeping looks dodgy.

Bear in mind that judging by the composition of Warren's portfolio and his financial success, his selection criteria are based solely on making money. The companies he invests in generally don't have financial exposure to the consequences of their negative environmental impacts. Coca Cola doesn't have to recover and recycle billions of empty plastic Coke bottles. They just increase profits by avoiding the recycling and cleaning of glass bottles.

Countries are different. They are responsible for their environmental impacts; even if they pretend they are not.