R.I.P. Elms - The second jumps racing death this week and the fourth this season.

See also: Hurdler’s death mars Casterton Cup meeting and Vic Opposition urged to get aboard anti-jumps racing campaign (26/5/2014).
2014 is the year of the horse, but our State continues to allow athletic and highly trained horses to be maimed, injured and killed for jumps racing profits.
7 year old gelding Elms has been KILLED after breaking down in the second hurdle at Casterton on Sunday 25th May.
After jumping the first hurdle, Elms broke down on the flat and was grabbed by barrier attendants. Veterinary surgeons later reported that Elms had severely fractured his right fore cannon while racing on the flat.

Elms is the third horse to be put down after a jumps race this season. After a successful start to the season two horses have lost their life in the past week.

It is with regret that Racing Victoria confirms that Elms had to be 'humanely euthanized' after suffering a severe fracture of the right fore cannon while racing on the flat during the early stages of Race 2, the BM120 Hurdle at Casterton. This was an 'unfortunate incident' and RV would like to extend its sympathies to trainer Luke Oliver and the owners of Elms at this sad time. 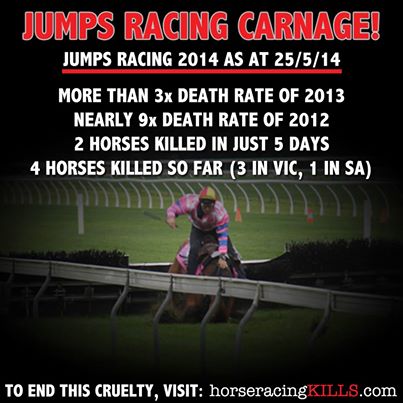 None of the excuses put forward by the jumps racing industry for the continuation of this cruel 'sport' are acceptable -- and claims that horses will be shot, or go to the knackery has only given the community greater insight into how ruthless and uncaring the jumps racing fraternity are.

Why allow the "sport”"to continue at such high price?

There was another tragic death of a horse at Sportingbet Park Sandown when three horses fell in the steeplechase, including Show Dancer, who was also euthanized down, and the event also being called off. 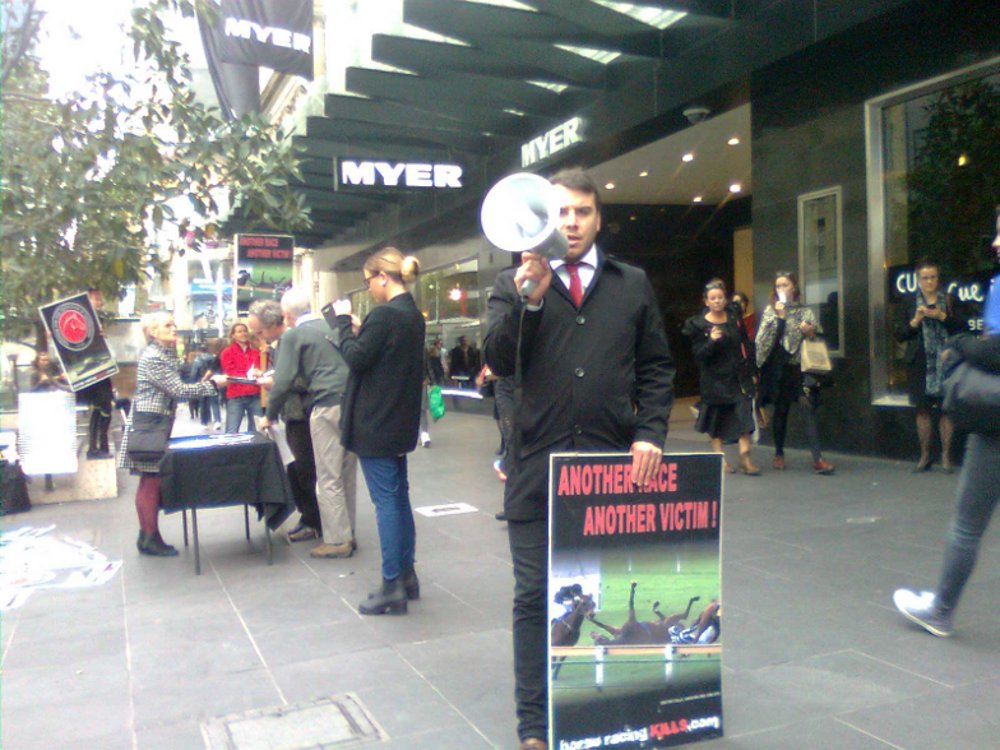 Show Dancers' legs slipped as he prepared himself for a hurdle, and he was fatally thrown through the fence, twisting and turning in the process. The 3400m steeplechase at Sandown on Tuesday proved to be a chaotic one, and ended in another horse being euthanised! While the jockey was cleared, the horse was doomed!

This tragic race was abandoned after three horses fell. If this race was called off due to "safety" concerns, then it's time the whole industry was called off.

While the racing industry claims that steeplechase safety has "improved" by 60% in the last four seasons with regards to fatalities, the very nature of the "sport" means it is inherently dangerous.

The speed, the heights, the clogged turf, the congestion, and the take-offs are all critical factors in making a safe finish, and that means decisions must be made under great stress for horses, and riders.

The very nature of jumps racing means that it can never by "safe". It's rare that horses die in flat races, so why should deaths be tolerable, and acceptable, when it comes to jumps racing?

The main players, the horses, are treated as throw-away items, as disposables in the pursuit of profits.

This barbaric "sport" no longer exists in any other states except for Victoria and South Australia. Jumps racing finished in Queensland more than 100 years ago. It stopped in WA in 1941 and in NSW in 1997. Tasmania ended it in 2007.

This "sport" should be trashed into history, along with other archaic activities such as recreational duck hunting, the mass slaughter of wildlife, 1080 poisonings, puppy factories, factory farming, and any forced use of animals in entertainment.