Blurring of Government with Land Speculation Ominous for democracy in Australia

The opaque but omnipresent relationship of Australian state governments to developers and big business is a source of disquiet. A Bastille Day lunch between Victorian Planning Minister, Mr Madden, and big-business seemed especially Marie-Antoinette, as hundreds of angry farmers, other landholders, wildlife and other environment groups, demonstrated outside.

All were concerned about the bad laws and injustices that excessive population growth is driving in Victoria. Most are beginning to realise that it is because of the Government's excessively close relationship with the developer growth lobby that Victoria is suffering from water shortages, homelessness, increased violence and loss of democracy. A new tax the government wants, which would involve taxing landowners instead of developers for government-imposed changes to land-zoning could beggar thousands of people. 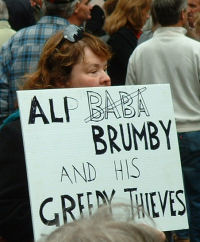 Yes, Jill. Bastille Day is the anniversary of the time in the French Revolution when the people demanded representation in return for their taxes from a worthless government that was selling off public land to the highest bidder in order to finance debt and printing worthless money.

Most Victorians pay far more than this in taxes every year but the Minister for Planning doesn't listen to them.

The Victorian public get NOTHING but coercive population growth and development expansion. Research has shown that many of the government's sponsors and business associates reap far more in public contracts than they ever donate.

President Quirk commented that, "In a democracy, government policies should be conceived and drafted with the interests of ordinary citizens in mind. The push for more and more population growth causes friction, disruption and loss for those directly impacted and also to the citizens at large. Nature as a whole is being steam-rolled and many cannot sleep at night from rage and despair."