Aleppo, Syria, awaits with hope for Russian intervention against terrorists

ALEPPO, SYRIA, October 5, 2015: I hesitated about sending this information, as it's only a little detail in a huge long conflict. Then I thought it was better to share such photos, the ones you never see in the daily propaganda against Syria and its people and government, who are facing such random attacks daily. I also talk about how Syrians seem to feel about Russia coming to help defend us against the terrorists. 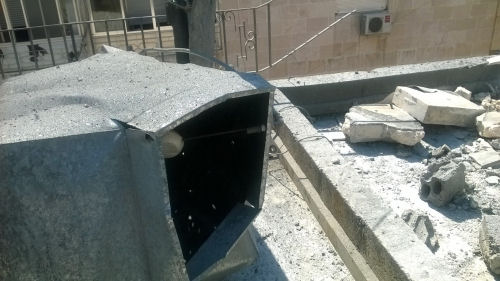 This is a roof of 4-story building, that was shelled by the terrorists yesterday. The building is on the way to the Military Hospital, so shootings and mortars hit it from time to time accidentally, while targeting the hospital.

A cooking-gas-cylinder bomb damaged two water cisterns on the roof, a solar cell heating system for water, plus a room that looks like a studio with a master bed and toilet. Window glass on the 4th floor was shattered.

The Syrian Arab Army [the national army defending Syria] investigated the spot and removed the shrapnel from the bomb. 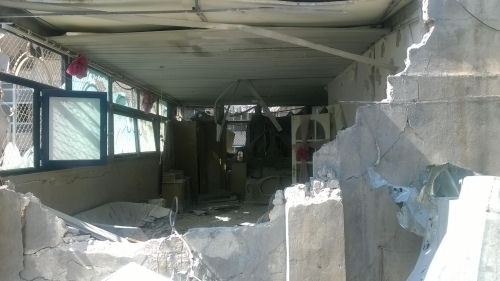 How Syrians seem to feel about Russia helping the Syrian government

I was asked for my assessment of the morale of the Syrian people in the post-Russian intervention phase. It was commented that across the world there seems to be a genuine support for the Russian role in Syria.

I can say that almost everyone I have met over here and everyone one I know online, in other Syrian provinces or among the diaspora, supports the Russians and their coalition with Iran, Iraq, Syria and Lebanese Resistance against the terrorists.

I wish to see the end of this nightmare before the end of the year. That dream is closer now, thanks to the Russians, who are targeting the real bases of terrorists, not just claiming to do so like the U.S. Coalition.

Some people have expressed fear that this could be a new trap for the Russians, like the one in Afghanistan back in the 70's and 80's. However I am guessing that they learned their lesson and won't make the mistake again.

I'm waiting for the Russians to start intervening in Aleppo. So far nothing happened over here. But they are preparing the arena for it.

What is happening now in Syria is in no doubts a "Game Changer", there is increased talk about 4 + 1 (Syria, Russia, Iran, Iraq and Hezb Allah), there is also some talks about ground's development. It may be indication that the tide is turning and Obama, Erdogan, Holland, Cameron and their stooges in the region are squealing!

Signs that international tide is turning for Syria

VANCOUVER – Canada should welcome Russian President Vladimir Putin’s offers to help fight the Islamic State in Syria, says Jean Chretien.
The former Liberal prime minister said Putin’s involvement in the Middle Eastern conflict may spark controversy but that the West would do well to accept the support.
“#ac193d">If Putin wants to help he should be welcomed,” said Chretien, who was in Vancouver on Thursday to lend his star power to the Liberal party’s British Columbia campaign.
#ac193d">“I met Putin. He’s a tough guy. He’s clear minded. But to run Russia you cannot be a pussycat. They play hockey very rough in the corners.”
#ac193d">
Conservative Prime Minister Stephen Harper has been strident in his criticism of Putin, who is an ally of Syrian President Bashar Assad.
Harper has said Putin’s moves to build up equipment and troops in Syria in an apparent bid to buttress the Assad regime will likely inflame an already volatile civil war.
Canada is part of a United States-led coalition that is bombing Islamic State military positions within Syria.
Tensions have escalated between the United States and Russia over Russian airstrikes that appear to strengthen Assad’s troops rather than hit Islamic State fighters.
The U.S. has raised concerns over how the two countries will avoid inadvertently firing on each other. Moscow has urged Washington to avoid “unintended incidents” by restarting direct military dialogue, which President Barack Obama suspended in the aftermath of Russia’s annexation of Crimea in 2014.
There is concern over the prospect of the U.S. and its former Cold War enemy falling into a conflict if Russian warplanes hit moderate Syrian rebels trained and equipped by the U.S., with promises of American air support in the event of an attack.
But Obama’s recent comments to the United Nations that he would be willing to work with Russia and Iran to end the conflict in Syria may force Canada to reconsider its relationship to Russia.
Harper’s last interaction with Putin was a terse handshake at the G20 summit in 2014, when the Canadian prime minister bluntly told his Russian counterpart to “get out” of Ukraine.
#ac193d">Last month, Chretien penned a blistering open letter criticizing Harper’s foreign policy and accusing the Tory leader of shredding Canada’s reputation as a compassionate, progressive, peace-seeking country.
#ac193d">In a snub to the Conservative leader, Chretien met with Putin at one of his palaces in Moscow earlier this year. Harper has avoided contact with the Russian president in the wake of both the unrest in Ukraine, as well as the annexation of Crimea.
Speaking from the campaign trail, New Democrat Leader Tom Mulcair said an NDP government would discontinue the bombing campaign in Syria and bring home the special forces operators responsible for training Kurdish fighters on the ground.
Liberal Leader Justin Trudeau has said the party would also pull the country’s CF-18 fighter jets out of the air war, but would maintain and possibly expand the training mission.

US playing ‘losing hand’ against Russia in Syria: Activist

PressTV-US playing ‘losing hand’ against Russia
presstv.ir
The US is playing a “losing hand” in Syria, as the government of President Assad is not going to fall, says an anti-war activist.

The United States is playing a “losing hand” against Russia in Syria, because the legitimate government of President Bashar al-Assad is not going to fall, says an American anti-war activist.

“Russia has provided aid to Syria to defeat the armies backed by the US,” said Joe Iosbaker, a leader of the United National Antiwar Coalition.

On Wednesday, Russia carried out its first airstrikes in Syria following a warning that the US should clear the skies in the Arab country.

“Russia was able to do this because… despite claims by the US and Western media the government of Bashar al-Assad is not about to fall,” he added.

“The government of Syria is a legitimate government. Syria has been invaded by foreign-backed armies. When nations are attacked by other countries, they have the right under international law to seek aid. They can seek aid from another country; so the aid being given to Syria by Russia is legal,” said the activist from Chicago.

He made the remarks in a phone interview with Press TV, when asked to comment on a statement by former US Republican presidential candidate Mitt Romney, who criticized President Barack Obama’s policy in Syria, saying he was "out-gamed" by Russia.

"Russia complicates things right now and Russia has out-gamed us once again,” Romney said at the Washington Ideas Forum on Wednesday.

Iosbaker argued that Romney and other Republicans are criticizing Obama “because he hasn’t won. They say he is not playing hard ball.”

“In fact it is the US plan to get rid of Assad that is failed. Russia was able to bring their aid in as as part of a regional alliance to play organized against ISIL that involves Russia, Iran, Iraq, and Syria,” he remarked.

“So the US is playing a losing hand. [Russian President Vladimir] Putin was dealt a better hand not because of his diplomatic genius, but because of the developments in the region.”

Iosbaker further said, “The US lost in Iraq. The US had to concede to the Iranians in the nuclear deal and now the US has failed to topple Assad.”

Russia’s military operations in Syria have raised concerns in Washington that they will target militant units trained and armed by the Pentagon and CIA, and bolster the Assad government.

US officials and media allege that the air raids have hit civilians and non-Daesh targets in the Arab country, a claim that Russian President Vladimir Putin has dismissed.

At least there's no pandering to Left sentimentality with Putin, or Russia. Iran, Russia are backing Syria in its battle against Takfiri terrorists and Western attempts to establish their dominance over the Arab country. Russian parliament gave a formal consent to President Vladimir Putin to use the country’s military in Syria to fight terrorism at a request from the Syrian President Bashar al-Assad. Their campaign has dislodged ISIL and al-Qaeda associated terrorist brigades. Syrian President Bashar al-Assad has said Russia's airstrikes against targets in Syria are vital for stability in the Middle East. Moscow is simply doing what we in the West just had no guts to do. The West does not want to fight because the Syrian opposition is deeply fragmented. In Putin's version of Syrian history, as laid out in his United Nations speech on Monday, the Islamic State was "forged as a tool against undesirable secular regimes" and propelled by foreign military support for Syrian rebels. In other words, Western nations helped create the Islamic State by rejecting Assad. "We should finally acknowledge that no one but President Assad's armed forces and Kurdish militias are truly fighting the Islamic State and other terrorist organizations in Syria," Putin told the U.N. General Assembly.