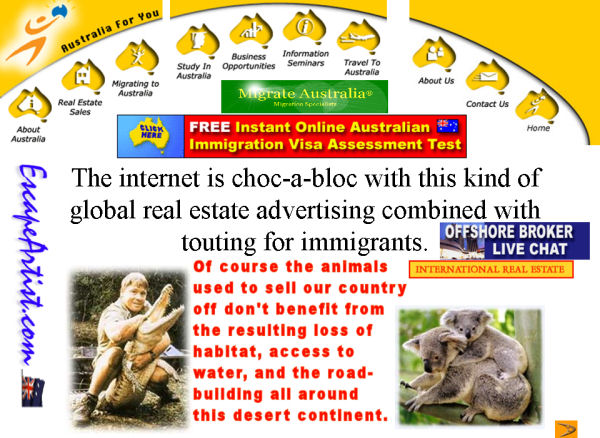 Various convoluted explanations exist for why high land prices (= land/housing prices) would not affect general inflation. These arguments do not hold, however, when a major factor in inflation comes from outside the local economy. In this article I draw attention to the likely impact of the addition to the Australian property market of more and more home buyers and property investors purchasing from overseas using foreign currency that has greater value than our local currency. Some may be from poor countries but they may also be among the world’s richest citizens.

Australia as a Pacific Island economy with little protection for citizens

The impact ressembles the effect of first world tourists on a third world economy.

Prices go up to meet the pockets of the tourists and locals are priced out of the market and reduced to living from a sort of fringe economy, as the more lucrative tourist economy takes over. Those locals that have held onto property are able to interact with the foreign-based currency holders on a more equal footing, since their assets have benefited from the
inflation. They become the elite. Rentals, like hotel prices, go up way past the affordability of the bulk of the locals, who are more and more marginalised. The rents still seem quite cheap to the tourists and foreign residents as long as these foreign residents hold substantial foreign currency and as long as their currency remains better than the local currency, or they remain wealthy by world standards.

A better system of land-tenure does exist, but we don't have it

The continental European (Napoleonic) system developed in France after the Revolution does protect citizens from this kind of impoverishment.

First world tourists will often complain about the outrageous prices of everything in tourist-affected economies like Noumea, French Guyana, the Seychelles etc. It is not so easy in these places to find little indigenous hotels where you may stay for a
song, and dine at little cost. At least one of the reasons for this is that in the overseas French territories the French system safeguards adequate public housing at affordable prices, as well as prioritising the employment of locals, the education of locals, the health system for locals, and unemployment benefits etc. This means that much of the earnings from foreign currency are passed on throughout the economy and to most of the population. So, whilst prices remain so high that only the rich really tend to stay in French resorts, the locals have sufficient incomes for them to be able to live within that economy without becoming marginalised into a secondary economy. This is a source of frustration to those who expect all resort economies located in third world areas, like the South Pacific and the Caribbean, to provide for cut-rate tourism. It is, however, a great thing for those who actually live on the islands.

Unfortunately Australia has a bad land-use planning system which leaves its citizens vulnerable.

Real estate speculation has been made possible on a level never previously conceived of due to the global Internet, through property dot coms like the media-owned www.realestate.com.au and www.domain.com.au. This has permitted rapid convergence and mushrooming of speculative industries and professions across government and private sector. We have at the Federal level, the National Foreign Investment Review Board (NFIRB) ramping up foreign investment in local built and off-the-plan real estate and facilitating built housing purchases by temporary immigrants for high turnover. On the local level we have realtors touting local property internationally with the assistance of private migration agents and local solicitors. At State level (where land use planning laws are made), organizations like the Property Council of Australia (APC) are closely involved with determining government policy.

Australians as islanders without effective rights of citizenship

Australian citizens are in the same predicament as the indigenous populations of small pacific island colonies when international developers decide to turn them into resorts and start building hotels and up-market housing. Resources and ammenities become limited commodities which only the rich can afford, and pretty soon the locals are barely subsisting in shanty-towns.

In the late 1980s people started to see that what was happening to Australia was the same thing that happened in Hawaii, where real-estate prices are notoriously high and related to the presence of a high volume of foreign investment capital.[10] During the pre-internet hike in Australia's land/house prices, beginning around 1988 and following the highest total net immigration in Australia prior to the current record-breaking period (2006-), there was an out-cry. The Australian government responded by barring foreigners from purchasing established dwellings in September 1987.

Urban researcher, Peter Rimmer[11] observed, however, that this did not prevent "Australians living abroad, immigrants with permission to settle permanently in Australia, and foreign companies seeking accommodation for executives from purchasing residences."[12]

Subsequent amendments to the Acquisitions and foreign takeovers Act (1975) have considerably watered down even these weak protections.[13] The FIRB now seems almost to be leading the charge in touting Australian real estate to foreigners with superior currency.[14] Foreigners on short-term visas, such as students staying for one year, are positively
encouraged to purchase established dwellings, providing they sell them when they leave at the end of one year. Short-term immigrants also provide a good market for rentals. The effect of this rate of turnover on land/housing prices must be hugely inflationary. A strong indication that it is considered a source of big money by the speculative real-estate suppliers to the market is the aggressive promotion of this opportunity for purchasing Australian real estate by migration agents with real estate and legal firm connections on the Internet.[15]

These trends to opening up Australian real estate and other equities began after the 1973 oil shock, in 1975, with Prime Minister Fraser. From less than 10% in 1972-75 under Whitlam, foreign investment in Australia increased to 49% of GDP in 1990-91. By 1986 more than half was destined for real-estate investment.[16] Prime Minister Fraser initiated a long series of amendments of the Australian Foreign Acquisitions and Takeovers Act (1975) with the effect of increasingly facilitating foreign investment in property development and real estate.[17]

In post-oil shock Japan opportunities for newly formed construction companies and developers shrank. Rimmer wrote that those major Japanese construction companies, which had been hurt by policies of zero public sector growth, preference for regional contractors, and sluggish private sector activity in Japan, particularly through fiscal policy in the early 80s, adapted to the situation by seeking work in other countries. They brought with them the funds invested by Japanese investors and banks, offering "the most favourable fixed price" and "to take an equity in the project if necessary, arrange loans at low interest rates from financial institutions in Japan or Australia" and guaranteeing "any money required if the project [went] over cost".

Australia, which was keen to attract major projects during the recession of the late 1980s, largely in the hope of job creation, responded to these inducements. Australian States vied with each other to attract these Japanese construction projects, many of which were in real estate. [18]

Rimmer wrote that "keen for the economic benefits and political spin-offs, the states, as we have seen, are prepared to override the usual planning role performed by local government of directing development into preferred locations to meet economic, social and spatial preconditions."[21]

This obviously remains the case.

The other consequence of concentrating investment on the property development/housing sector is that a growing population provides an easy, constantly increasing market for raw materials produced here, but for cheap imports produced overseas. This perpetuates the many problems associated with a commodity bound economy, dooming us to ever increasing foreign debt, with a widening rather than deepening economy, restricting our skills and systems bases.[22]

The notes begin at [10] since this article adapts extracts from another document.

[10] In a land-planning system with many of those hall-marks of the US system.

[11] Peter J Rimmer, "Japanese construction contractors and the Australian states: another round of interstate
rivalry", in the International Journal of Urban and Regional Research, E. Arnold, London, Vol.12., no.3.,
pp.404-24.

[13] Information about these changes to The Foreign Takeovers Act )1975), now known as the Foreign Acquisitions and Takeovers Act (1975) over time is available from the Foreign Investment Review Board in appendixes to its Annual General Reports, which are available on internet from http://www.firb.gov.au/policy_pubs/publications/AnnualReports/1999-2000/appd.htm Note that the Act is not confined to property investment but this seems to be a large part of its business.

[14] www.escapeartist.com/australia, which is an immigration and property investment internet site, announces, “Expatriates Build Wealth in Australia - The Aussie dollar is at an all time low against the American dollar and the strong Pound Sterling. Consequently there is strong purchasing power for Expats and UK residents in Australia. Australia welcomes foreign investment in real estate. Overseas investors can therefore obtain the benefit of freehold title. …”

“To take advantage of this, major developers such as Central Equity apply to the Federal Government Foreign Investment Review Board to gain permission to sell their residential apartments to foreign investors prior to releasing their development to the public.”

[15] Here are some examples of these kinds of internet sites. Migrate Australia www.migrate-australia.org/ are owned and operated by My Great Australia Pty Ltd. Like many members of the Migration Institute of Australia, they deal in real estate, finance and conveyancing, as well as arranging all sorts of visas and providing legal advice.

Some others are: www.James Tan Immigration lawyer.htm, www.escapeartist.com/, which has pages for many other countries in the world and www.australiaforyou.com.au. Australia For You has remarkable graphics. In fact many of these sites are graphically innovative, information packed, multi-lingual, specialise in a particular language, may offer a specialty, such as romantic introductions, and seem impressively connected and serviced. They generally lead with the information that they have registered immigration agents on board.

[17] Information about these changes to The Foreign Takeovers Act )1975), now known as the Foreign Acquisitions and Takeovers Act (1975) over time is available from the Foreign Investment Review Board in appendixes to its Annual General Reports, which are available on internet from http://www.firb.gov.au/policy_pubs/publications/AnnualReports/1999-2000/appd.htm or see more current information here. Note that the Act is not confined to property investment but this is a major part of its business.

Taking its data from OECD reports, the Mortimer Report found a negative correlation between per capita GDP and population growth over the period 1970-1995.

For countries like Australia that rely on their resource base for their income, the argument is particularly significant. In 1860 about 70% of the country's exports were mineral and agricultural products. Almost the same ratio applies today. For Australia’s situation, the more specific question than what do countries have to win or lose from population growth is - what does a country with a commodity-based economy have to gain economically from population growth?

The answer to this question lies in the external trading account. For population growth in commodity-based economies:
• almost no relation at all exists between exports and population.
• an almost linear relationship exists between population and imports.

Extreme cases often make telling points. A country which is entirely reliant on commodity exports and has an extreme level population growth may reveal an outcome that a less extreme country might achieve at a more leisurely pace.