PRAGUE, (SANA)- Ex-CNN reporter Amber Lyon revealed that during her work for the channel she received orders to send false news and exclude some others which the US administration did not favor with the aim to create a public opinion in favor of launching an aggression on Iran and Syria. 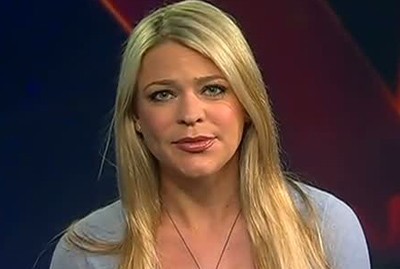 Lyon was quoted by the Slovak main news website as saying that the mainstream US media outlets intentionally work to create a propaganda against Iran to garner public opinion's support for a military invasion against it.

She revealed that the scenario used before launching the war on Iraq is being prepared to be repeated where Iran and Syria are now being subject to constant 'demonization'.

The former reporter clarified that the CNN channel manipulates and fabricates news and follows selectiveness when broadcasting news, stressing that the Channel receives money from the U.S. government and other countries' governments in exchange for news content.

Editorial Comment: As only one of countless examples of how the Australian public have been similarly deceived about the Syrian conflict, see Fisk says the Arab states are no longer afraid of the US on ABC's Lateline of 28 March and read Socrates' response, The Truth According To Robert Fisk.

TEHRAN (FNA)- American news channel CNN fabricated the remarks made by Iranian President Hassan Rouhani in response to the network’s question about the Holocaust.

The CNN aired its interview with Rouhani on Tuesday but the news channel added to or changed parts of his remarks when Christiane Amanpour asked him about the Holocaust.

Here is the exact transcript of the Farsi text according to the CNN broadcast:

#EDF5FA;">(Text is omitted for now as this installation of Drupal cannot display Farsi characters. To view Farsi text, see the original story on Global Research.)

Here is the exact English translation of President Rouhani’s remarks:

Rouhani’s: “I have said before that I am not a historian and historians should specify, state and explain the aspects of historical events, but generally we fully condemn any kind of crime committed against humanity throughout the history, including the crime committed by the Nazis both against the Jews and non-Jews, the same way that if today any crime is committed against any nation or any religion or any people or any belief, we condemn that crime and genocide. Therefore, what the Nazis did is condemned, (but) the aspects that you talk about, clarification of these aspects is a duty of the historians and researchers, I am not a history scholar.”

And here is what the CNN translation says:

“One of the things your predecessor (President Ahmadinejad) used to do from this very platform was deny(ing) the holocaust and pretend(ing) it was a myth, I want to know you, your position on the holocaust, do you accept what it was, and what was it?”

“I’ve said before that I am not a historian and then, when it comes to speaking of the dimensions of the Holocaust, it is the historians that should reflect on it. But in general I can tell you that any crime that happens in history against humanity, including the crime that Nazis committed towards the Jews as well as non-Jews is reprehensible and condemnable. Whatever criminality they committed against the Jews, we condemn, the taking of human life is contemptible, it makes no difference whether that life is Jewish life, Christian or Muslim, for us it is the same, but taking the human life is something our religion rejects but this doesn’t mean that on the other hand you can say Nazis committed crime against a group now therefore, they must usurp the land of another group and occupy it. This too is an act that should be condemned. There should be an even-handed discussion“.

FNA NOTE: The Red parts have been added or completely altered. The Yellow parts are the product of conceptual, and not precise, translation.

Yet, the underlined parts are the worst parts of the fabrications which totally change what President Rouhani has said.

After the CNN released the interview, hundreds of news agencies, TV and news channels, websites and weblogs broadcast this title: “Iran’s President Rouhani Calls Holocaust ‘Reprehensible’ Crime Against Jews”, a title quoted from the CNN; Or “Rouhani Recognizes the Holocaust as Crime against Jews”.

A former US soldier has been arrested and charged with terror offences after he allegedly travelled to Syria. Eric Harroun, a 30-year-old army veteran from Phoenix, Arizona, is alleged to have joined a squad of guerrilla fighters from the Al-Nusra Front. Harroun has been charged with "conspiring to use a destructive device outside of the United States", an offence that carries a maximum penalty of life in prison. British security services said that scores of UK citizens are fighting in Syria. A recent Home Office’s annual report titled ‘The United Kingdom’s strategy for Countering Terrorism’ highlights the growing threat that might come to the UK from Syria. The fighters have come from range of ethnic backgrounds include young Asians, converts to Islam and men from north African backgrounds. Hundreds of international fighters have flocked to Syria to join the war against Bashar al-Assad's government. Some are fresh-faced idealists driven by a romantic notion of revolution or a hatred for the Assads. Others are jihadi veterans of Iraq, Yemen and Afghanistan. US Army's own West Point Combating Terrorism Center report "Al-Qa'ida's Foreign Fighters in Iraq," was extensively cited by historian and geopolitical analyst Dr. Webster Tarpley in March of 2011, exposing that NATO-backed "pro-democracy" rebels in Libya were in fact Al Qaeda's Libyan Islamic Fighting Group (LIFG), listed by the US State Department, United Nations, and the UK Home Office as an international terrorist organization. According to a Reuters news report Dr. Jacques Beres of Doctors without Borders served at a hospital in Aleppo for a two week period claims the majority of his patients were foreign fighters (see article: Jihadists join Aleppo fight, eye Islamic state, surgeon says http://www.reuters.com/article/2012/09/08/syria-crisis-jihad-idUSL6E8K80... ). Here is what he said exactly: "Well, they’re (Syrian rebels) recruited by networks of NATO intelligence. This is after all a CIA covert operation, they form a secret army." The reports were that foreign fighters were a significant and growing part of this insurrection, so they’ve been recruited from Morocco to Pakistan and from Somalia to Chechnya. At least 25 are reported dead after a chemical weapons attack targeting Syrian soldiers was carried out by NATO-backed terrorists in the northern city of Aleppo. Any chemical weapons imported into the country would implicate NATO either directly or through gross negligence, as the weapons would have passed through NATO-member Turkey, past US CIA agents admittedly operating along the border and along side Western-backed terrorists inside Syria. Of course reporters aren't able and free to give the "news" objectively as it is! Like all media operations, they have their set agendas and vested interests in selling newspapers/media outlets, not broadcasting independent and objective "news" based on facts and empirical evidence.