The meeting showed huge community concern over our deteriorating living conditions and what the future holds.  There are many community groups with detailed knowledge of the mechanisms and laws around what is happening in their various specific trouble spots. These people are community-minded,  dedicated, and well informed. An enormous amount of manpower (most of it unpaid) is going into trying to mitigate the effects of developer-driven growth-for-huge-profits, where democracy has given way to money.

Called, "Growing our city's tree cover," this was a forum for community groups, organised by Planning Democracy’s convenor, Kelvin Thomson. 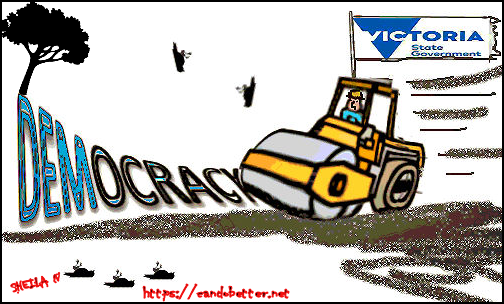 Steve Staikos, City of Kingston Mayor, showed maps of the city which correlated canopy retention with lower temperatures and the danger of rising city temperatures with loss of canopy. He noted that most urban tree cover is on private land, and so that is where people need to be encouraged – with sticks or carrots – to retain trees and bushes for nature, and as a counter to climate change. A lot of people can be enthused to conserve nature, but it is hard to enforce laws and regulations about tree removal.

Kingston is proud of its green wedge, where revegetation projects are ongoing with Boon Wurrong Council. The rapid ongoing removal of mature trees in the present may eventually be compensated by planting seedlings for some future canopy. ‘Plant now for canopy in 2050.’

(The hope seems faint in the planned ‘Melbourne at 9 million,’ which seeks to maximise the financial value of land over any other value.)

Hundreds of people have signed on to projects like ‘Gardens for wildlife.’ The concept of ‘Landscape character precincts’ tries to consider gardens and streetscapes in consultation with the community. The principal is for the council to support keeping gardens as natural and indigenous as possible. Design guidelines specify that canopy trees should be included or retained on new developments. The fact that houses, pools and paving are now taking up more and more of block leads to problems in maintaining the initial vegetation specified in the plan. Often trees are removed before building is even commenced. The financial penalties involved are minor relative to potential profits and are factored into the price of the development.  An example was given where a tree was assessed as worth about $47,000, but the four different developers who benefited from its removal were only fined a total of about $26,000.

Judy Bush, of the University of Melbourne, mentioned that in Hawaii they have used tax deductions for exceptional tree maintenance.

Liz Sanzano reminded us of how, since amalgamation, people hardly know where council areas are.  She also suggested that people subscribe to ‘Planning Alerts,’ and obtain news of new proposals for any specific address at https://www.planningalerts.org.au/alerts/signup.

Urban forest strategy has the collaboration of 32 councils and 14 State Government strategies already exist to support it. Councils' capacity to enforce local laws is severely limited. In reality, most local power has been taken over by a state government that acts against local representation and prioritises development intensification to the exclusion of nature and without demonstrable heed to climate.

There were numerous stories of how trees were removed when they had reached some ambiguous threshold of ‘senescence’ or their ‘use-by date.’ No-one mentioned how the Japanese use an aesthetic variety of engineered and artisan props to maintain huge old trees indefinitely in urban environments, nor how animistic tendencies in Japan support reverence and appreciation for trees.

Liz Sanzano evoked the insulting and grievous absurdity of ‘offset planting,’ where trees are razed in one suburb and supposedly replaced by seedlings in some other suburb. Trees were described in terms similar to a public good, because we can all see them and feel their benefits, even if they are on private land.  Removing them has an effect on all those aware of them.

Not alone, but isolated, disorganised, stigmatised, and disempowered

Most of the speakers suggested that tree canopy activists might be reassured somewhat by the idea that there are so many individuals and groups that are concerned about retaining urban tree canopy, although it was noted that there was little coordination between these groups.

At the end of the formal speaker part of the meeting the room was opened for comments and discussion. The exchange that followed was like the difference between the ideals and reality. The audience was mostly made up of dedicated and seasoned environmental activists, often veterans of many decades of activism and labour on behalf of their communities – the sort of people that commercial demographer, Bernard Salt, has labelled as ‘B.A.N.A.N.A.s’ (Build Absolutely Nothing Anywhere Near Anybody) [https://candobetter.net/node/2785].  People pointed out from the floor how state planning is dedicated to massively increasing population and urban density, only giving lip-service to the idea of tree retention.  Someone said that the new North East Link ten-lane expressway would entail the removal of 30,000 trees. Another pointed out how Melbourne at 9 million would obliterate all attempts to retain urban character, let alone trees [or democracy].

Four climate-change activists sitting in a row described their battle to minimise environmental harm in the development of Caulfield Racecourse, where something like 50 trees and a lake were up for the chop. They hoped to save perhaps nine trees ; they weren’t sure for how long.  [And how many years of their lives would they dedicate to this David and Goliath war?]

Someone from the Surf Coast told of how the council now permitted (despite challenges) nature strips there to be surfaced in gravel, and allowed boats and caravans to be parked on them. This was becoming a depressing visual feature of new suburbs.

Echoing an earlier remark by an ex-councillor, a Greens candidate said that the State government seemed to be run by developers, as well as local councils. This prompted a remark that the developers are in an undeclared war with the rest of us. They have all the money and power, they have taken over the state government, and all these rules, principles and regulations are really only a facade and a mechanism to exhaust the well-intentioned.

How can disparate and isolated individuals and groups fight organised industry groups in a system that pushes demand and the cost of land so high that significant profits can be made by removing trees, whilst the measures to protect trees are so hard to apply and so labour intensive to monitor?

Kelvin Thomson concluded the meeting by reminding those present that his group, Planning Democracy, did not accept the plan of 9 million people in Melbourne.  Thomson is a force to be reckoned with. He has succeeded in covering the democratic concerns about overpopulation and overdevelopment of people all over Melbourne, as the reader can see from his newsletters, which we publish on https://candobetter.net/taxonomy/term/1325. For so many individuals and small groups struggling in isolation, he offers the prospect of leadership and encouragement.

The meeting showed once again (as did Kelvin Thomson's first forum a few months ago) that there is a lot of community concern over our deteriorating living conditions and what the future holds, if we continue in the same direction as our jugganaut to date.  There are many community groups with detailed knowledge of the mechanisms and laws around what is happening in their various specific trouble spots. These people are community-minded,  dedicated, and well informed. An enormous amount of manpower (most of it unpaid) is going into trying to mitigate the effects of developer-driven growth-for-huge-profits.   The number of battles seems to have burgeoned since the days when groups would assemble on Parliament House steps (to be mostly ignored by the mass-media) or when activist resident groups were all invited to be listened to (and disregarded) by planning Minister Justin Madden in the early 2000s.

Finally, is planning really the problem?  Things which appear to be improvements - like this tree saved, and that high-rise slightly lower - are only deviations in the general direction of a deteriorating environment and our diminishing political power and representation. Clifford Hayes (Sustainable Australia Party Member of the Victorian Legislative Council for Southern Metropolitan Region) mentioned Aboriginal care of land and superior understanding and what a mess we have made of things. The most awful part of this truth is that there is no improvement: the biggest mess is being made now. If we looked back at - say 1960 - our suburban environment would look much more attractive. There is absolutely no progress with respect to any aspect of our urban environment and nature within it.  In fact, we are going backwards fast.  One lot of plans might win against another lot of plans, but the biggest driving force against nature, removal of trees, is the growth imperative. Even what seems not to be urban densification, such as the big house built to the boundary, is really another form of densification. Planning is being prostituted by developers demanding natural space be sacrificed, to accommodate artificially stimulated population growth, in Australia’s globally marketed land-commodification system. Australians have virtually no say in this.

The letters in the Age, as for decades, make much more sense than the articles therein.

The problem is one of demand, not just supply
It is unsurprising that Brendan Coates of the Grattan Institute would tell people to effectively “suck it up” and accept higher-density buildings because the institute is a major spruiker of mass immigration (“Quarter-acre dream a ‘problem’”, The Age, 15/9).

Sure, we don’t have enough houses, prices are astronomical and renters live in fear, but let’s add an extra 200,000 people per year into the demand queue for housing.

Perhaps Coates should accept what the research by groups like the Australian Population Institute or your own commissioned survey by Resolve Strategic are saying and recognise that Aussies and their communities don’t want mass immigration restarted.

The rest of us must accept higher-density living ...
Having a backyard for the children to play in, room for a vegie patch and some fruit trees, inviting friends over for a barbecue and a game of cricket and space from your neighbours was something that the average working person could aspire to.

We were the envy of the world and the Australian lifestyle was no doubt a major factor in the postwar immigration boom.

The quarter-acre dream in the cities is now an option only for the well-to-do. As noted by the Grattan Institute, the rest of us must accept higher-density living. This is the inevitable consequence of policies promoting a Big Australia.
Barry Lizmore, Ocean Grove

Instead of high density (Letter to the Age)

A better option
If we convert our suburbs and towns into high-density housing, as recommended by Brendan Coates (“Quarter-acre dream a ‘problem’”, The Age, 15/9), our gardens and trees will disappear under a sea of concrete unless more open space is created.

We need to adapt quickly to a warmer world to ameliorate the effects of climate change and reduce CO2 emissions. We need far more trees and green spaces to do this and retain and improve habitat for other species.