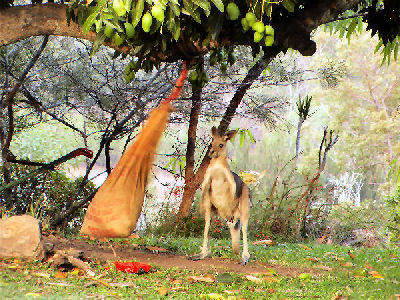 Picture by Sheila Newman. Wild kangaroo using a recreational boxing bag under a mango tree at a kangaroo re-release centre in Queensland run by Anne-Marie Dineen.

A new political party - The Animal Justice Party - has been formed to champion the rights of animals by people who care about their rights and want them to have happy lives and their own space!

"Cruelty to animals has become an unfortunate and much too common feature of Australian society that needs to end. A number of non-government organisations have been tackling these animal welfare issues at ground level from various perspectives, however there is a need to bring some influence to this agenda from a government policy dimension. The Animal Justice Party is being established to pursue issues of animal welfare through the Australian Parliamentary System by encouraging the adoption of animal friendly policies by other political parties, demonstrating that voters care about animal issues by contesting elections, and educating the electorate about the animal policies of candidates from other political parties.

The Animal Justice Party will actively campaign at a government policy level against animal cruelty atrocities as they relate to wildlife destruction, factory farming, animal transportation, companion and domestic animals, pet animals and the use of animals for sport and entertainment. It will seek to toughen animal protection laws, increase penalties for convicted animal abusers, regulate and restrict the sale and use of pets, and enhance education in greater awareness and appreciation of the needs of animals."

Subject was: Policies of the AJP There was just one more thing that was forgotten in that article; to ban the use of live animals for experimentation and teaching in university and other laboratories.

How exciting! How do we join?

How exciting! How do we join such a party? Will they be campaigning for the rights of animals such as the right of wild animals to have habitat? It seems that at present development including farms is having a massive impact on the availability of our native animals to find anywhere safe. Where I live the council wants to put in a massive dam in the most biodiverse, highest riparian conservation area where there exists koala colonies, the most platypus in the shire, wildlife corridors, over 15 endangered species of fauna, adjacent to 3 world heritage areas. Insane! Especially when you consider that dams only have a life expectancy of 50 years. Let's hope the AJP comes into power ASAP!!!!!

Just sent my application to join the Animal Justice Party ...

It's about time we take action! give a voice to those who can't speak for themselves, but give us so much love and joy.