To make a woman seem to all,
A shadow and not very tall,
In fact to make her very small
And push her right against the wall
All it takes is lots of press, 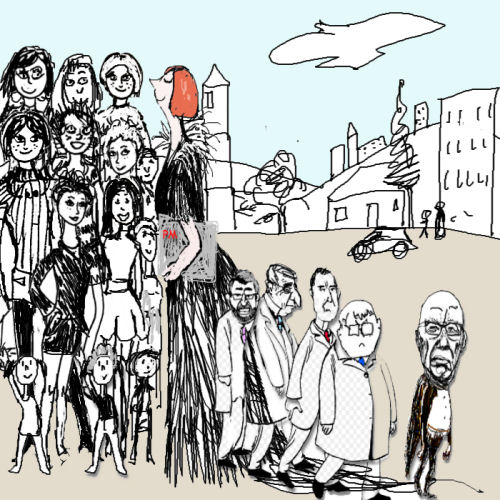 To make her life seem but a mess
And everything that she achieves
Is tucked away so none believes.
Word gets around that she has failed,
But no-one knows quite what was hailed
To be her undeniable transgress
Seems no-one’s sure but “‘twas in the press”!

Much fun was made of our PM’s dress,
As with Joan Kirner by whom we were blest,
We recall the dots but were they true?
Now it’s stripes. Why can’t they see through?
These women on our TV screens,
Are normal or so it seems to me,
But made out to be by mainstream tools,
Clumsy, absent minded fools.
Despite all this we see and hear,
(They cannot hide it ‘tho much they fear,)
The woman’s real authentic class,
And if that shines through, she’s sure to pass.

Driving with a friend the other day, she told me how fed up she is the Prime Minister, Julia Gillard. I asked her why. She said, “Well, the stimulus package, the insulation.” I said, “But I think that was during the Rudd government. She said, “Oh well, I put them all together." I asked, "What else?" and she said, “The money for schools.” I said that I thought that too had been during the Rudd government. I asked what she thought of the National broad band scheme. “Oh well, that’s taking ages …I don’t suppose it’s her fault that they found asbestos.” (Well er, no!) Then I asked about the disability insurance, and she said: "Well yes, obviously that’s a good thing, but it was brought in order to buy votes.” I said, ‘It was brought out well before the election." ”Oh you mean last month!!!" she expostulated. She continued “Labor just can’t handle the finances, they said they would deliver a surplus and now it’s a deficit. That really worries me. Whitlam wrecked the finances and now this government is doing it too.” I could have said, but what about the good work that Whitlam did to keep housing prices and population growth down? (All undone by subsequent governments). And what about the international depression? But she had turned on the car radio and her attention was riveted by yet another Murdoch journalist moonlighting on the ABC talking about another so-called leadership spill...

The Process: a poetic reply

They do not really have to lie To diminish and to crucify Denigration and "anti-dignification", Will bring down the leader of a nation. As a child at school is isolated When the top girl says her style’s outdated. Rumours and nasty minded talk All through our media do their work To break her inner team’s support And kill the leadership bravely fought. It’s enough to say “they do not like her”, No reason given; just to spite her? When something is so oft repeated Its mission is almost completed.

I am sorry to see Julia Gillard discarded as Prime Minister. In time she will come to be appreciated as a great leader. As for now, Labor under Rudd might come close in the election. But I don't think Labor will come very close, losing - who knows? - Let's say 15 seats.

I am disappointed that so many people let Julia down in the popularity polls. And WHY did they? I don't know. She kept her cool, was tough and strong, cares about Climate Change, got the National Disability Insurance Scheme (now called 'Disability Care Australia') up and almost ready to go, ran a good economy (better than most), did a lot for education and health and much else such as the national roll-out of fibre optic cables, free home insulation, she negotiated a workable tax on mining profits, attended to foreign affairs competently and so on. And all this with a minority government. God, the woman's a star! Her true achievements should have been sheeted home by the media. I am puzzled that journalists didn't air all these things more and sing her praises instead of echoing Tony Abbott's negative comments - that he and the journalists repeated ad- nauseum.

It's as if the journalists are being told what to say, and maybe they are.

The furore over Kevin Rudd's "big Australia" shock to the nation contributed to his downfall. To ease her transition into Prime Ministership, Julia Gillard reassured the public that she didn't approve of Australia "hurtling towards a 'big Australia'" and instead nominated Environment Minister Tony Burke as Minister of "sustainable" Population. However, nothing was ever done towards the target of a sustainable population. There were three consultative panels that discussed the issue, but Tony Burke's final conclusion had no relationship to the findings of the panel and he declared that population growth would continue. There has been no media releases, or anything, from this Department.

Julia Gillard cut immigration rates from K Rudd's over 300,000 per year, but then it has been creeping upwards. Her "sustainable" population policy is no different from Kevin Rudd's "big Australia". It's all spin, and we have an economy based on jobs, tax revenues, business opportunities for the elite, and the impossibility of perpetual economic growth at all costs. The least brain-draining way of increasing the size of the economy is population growth - and ignore the impacts on the environment, hip pockets, public welfare and long term implications.

While in the details Julia Gillard had some good ideas and enlightened presentation, she failed to have vision and humility for what was happening at grassroots levels.

Population growth now is stealing from future generations - our descendants. Gillard doesn't have children, but parents today must be concerned about Australia's eroding living conditions, a bleak jobless future, costs of living and decline of our cities.

Editorial comment: The shortcomings in Julia Gillard's policies may have, in part, been due to the fact that she would have felt constrained from doing all that she would have preferred to do in the difficult political circumstances she found herself in. If she had been allowed to remain as Prime Minister, I think it is far more likely that she would have acted soon to end population growth.

PostGrowthEra wrote, "The least brain-draining way of increasing the size of the economy is population growth." An illusion of 'growth' is created by the building of more houses, roads, government bureaucracy, retail infrastructure other infrastructure to meet the needs of the new immigrants, but as there aren't any industries which need more workers to produce either for domestic consumption or export, all of this must be paid for out of our existing national wealth. Population growth does not increase the size of the economy. It only increases the number of people amongst which finite resources must be shared.

JULIA Gillard will continue to run "a sizeable immigration program" as she steers the nation towards a population of more than 40 million by 2050. As reported in The Australian on 4th April, she did not anticipate a change in the overall rate of immigration and would not impose population targets, while defending her government's treatment of asylum-seekers.

She backed down on her "sustainable" Australia policy. She is a growth-ist.
"We will continue in the years to come in my view to be a nation that welcomes migrants and particularly welcomes skilled migrants.." There's no guarantee of jobs, affordable housing, a rein on costs of living etc. It's policy in a vacuum, without considering the overall impact and all the parameters or costs of growth. More people means more consumers, more tax payers, more customers for big businesses and more construction for developers and the housing industry.

She's in the pockets of the elite, of global, national and multinational corporations who all demand limitless growth.

It's all part of the "Asian Century" to share Asia's population and economy.