The Australian Foreign Minister, Julie Bishop, is pushing long-refuted lies about Syria as she speculates where she and her colleagues might find a replacement for Assad, without the slightest suggestion of irony or 'elections'. Article first published in Russian Insider at http://russia-insider.com/en/politics/australia-fm-pushing-long-refuted-syria-lies/ri10271, October 6, 2015. 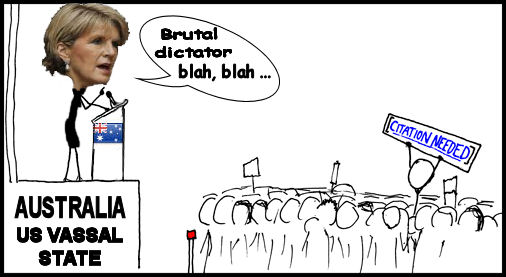 In an interview with Australia's state broadcaster on Sunday, foreign minister Julie Bishop stated that there must be a 'political solution' to the Syrian crisis, and that this would have to involve Syria's President Bashar al Assad during a 'transitional period'.

Although this position is being portrayed as 'going soft on Assad', it is actually not a new position for Australia, which has privately conceded to the Russian proposals in the 2012 Geneva agreement. What was striking about Bishop's statement was that it elicited such consternation in the interviewer, who clearly saw 'working with the Assad government' as being similar to helping the head-choppers of ISIS.

Up to this point in the interview Bishop's answers to his questions - like 'what is Russia doing?', and 'why is Russia doing this now?' were properly diplomatic, and displayed the effects of conversations she has had with Russian and Iranian ministers. We shouldn't doubt that they 'put her in the picture' on Russia's viewpoint and red lines over Syria.

But this experienced ABC commentator, who frequently interviews government representatives on important issues, displayed shocking bias against both Russian and Syrian leaders with a series of heavily loaded questions, pushing Bishop to make some surprisingly ill-judged statements. She was forced to 'concede' that 'the Assad regime is truly odious', and that 'Assad cannot remain - as he has used chemical weapons against his own people… this is how it all began'.

The well mis-informed interviewer was reassured by this embellishment of the familiar old story (the 'Chemical Weapons attack' - or 'Ghouta false flag' - happened two and a half years after 'it all began'), and displayed his own evident outrage at Russia for 'targeting the moderate opposition forces fighting against the brutal tyrant Assad'. The two then speculated on where we might find a replacement for Assad, without the slightest suggestion of irony, or mention of 'elections' or of Syrians' democratic choice.

To say I am exasperated at this renewed barrage of anti-Syrian and anti-Russian propaganda is insufficient; it is becoming both intolerable and dangerous, and with every new development in the war being misrepresented by Western leaders and media, the real war is more than ever an information war. Of course it always has been, with the covert use of snipers to incite violence in the first protests.

But after four and a half years of fighting this battle for the truth, and the feeling that some progress was being made, it is infuriating to see the same old stories resurrected with added vigour. I had entertained the ridiculous idea that sooner or later the Australian government would 'admit' to understanding two essential truths about the Syrian government - that it was legitimately elected, and that it did NOT use chemical weapons in 2013.

Sadly quite the opposite is happening, and Russia's intervention is evidently 'the cause' of it. Russia has called the West's bluff, that it is fighting terrorism in Syria, so we might expect a certain amount of squealing from those who were just pretending to do so, accompanied by some muffled denials. What is a little unexpected is the resurrection of some long-dead myths instead, like the 'moderate rebels' and the 'Free Syrian Army' ( whose  resurrection was remarkably rapid and involved many new converts!)

Some other myths have been exposed too - the myth of the CIA trained forces from Jordan has been exposed as true! With remarkable cunning, the US and its complicit media have devised a cover story for this revelation - of 10,000 fighters trained over the last several years; 'we trained 54 'moderates', but only 4 or 5 survived an assault by Al Nusra' - says US defence secretary Ashton

Carter. Some of those thousands of US trained and armed insurgents were discovered by Russian bombs, when the CIA shamefacedly dared to complain that their 'moderate forces' in Western Syria had been hit. In as strange twist for the chronically misinformed ABC, another senior presenter then revealed her apparent ignorance of the main terrorist group the Syrian Army is fighting in this area - the so-called 'Army of Conquest', which Saudi Arabia and Turkey launched into Syria back in March in a last ditch attempt to impose their own 'political solution' on Syria.

The Army of Conquest is purportedly mostly Al Nusra fighters of Chechen and Turkmen origin, but given the advice of the CIA's David Petraeus recently that 'we should work with Al Nusra in Syria', - well one might conclude that 'we' already are!

So when Julie Bishop and other Western officials say that 'there must be a political solution in Syria' they are missing the rest of the sentence - 'for our goals to be achieved'. And because it was long intended by the US coalition to achieve those goals by military means, no amount of careful Russian diplomacy would ever have succeeded in countering them.

Let's hope now that Russia is delivering a message to the West in the only language it seems to understand, that the 'military solution' to Syria's battle will be swift and effective - with a little information back-up…

Alternative news/comment on Russia in Syria

Putin Destroys 40% of ISIL’s Infrastructure in One Week
http://21stcenturywire.com/2015/10/09/putin-destroys-40-of-isils-infrastructure-in-one-week/