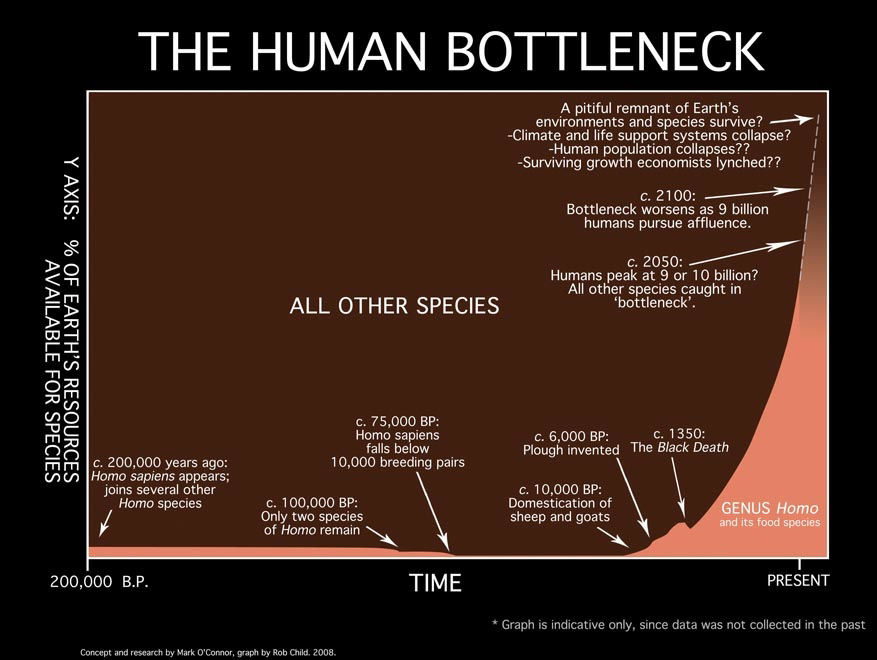 Perhaps the most urgent near-term issue for environmentalists is one that few yet talk about. It is what I call "the human bottleneck".

Just as the genus homo itself went through a bottleneck when all but one of its species vanished, and just as even that one survivor, homo sapiens, seems to have fallen at one point to less than 10,000 breeding pairs, so all other species on Earth will soon have to pass through a bottleneck as humans pass through what we hope will be a maximum population of about 9 billion, later this century. This will leave so little land and food for other species that many, perhaps most of them, will perish.

Note that the narrowest part of the bottleneck for other species will not necessarily come when the human population peaks. At that stage many, or even most humans will still be living in poverty but aspiring to affluence. Hence the squeeze on all other species will actually continue to get worse, and perhaps very much worse, after the human population peaks.

The assumption that world population could peak at approximately 9 billion is taken from
http://www.census.gov/ipc/www/idb/worldpopinfo.html

For the assumption that much of that population will still be pursuing increased consumption, and thus intensifying rather than relaxing the squeeze on other species, the author relies on his perception of common experience of human nature and of social inequalities.

You'll notice that the graph has such a small scale on the X axis (which covers 200,000 years) that one cannot read fine detail from it about values on the Y axis over the next 50 years (which would be speculative in any case) or the last 50. This suits, because the figures would vary according to what measures are used.

e.g. it is commonly said that humans now use some 40% of the Earth's primary production (i.e. plant food created from sunlight). But it does not follow that 60% of Earth's surface is freely available for other species, and I presume less than 20% is in virgin state. It also depends whether one includes the oceans. Virtually no part of the ocean surface is not harvested by fishermen, so this might put us as at present intensively harvesting the production of 80% of the planet rather than 40%.

Fortunately, as I say, the graph does not permit of reading its values in such fine detail over short periods --which is another way of saying that the overall shape remains the same pretty much regardless of what measure one uses for human domination.

Mark O'Connor is the author of This Tired Brown Land, Duffy and Snelgrove, NSW, 1994. He was Australia's Olympic poet for the year of the olympics in Sydney. He has published many books of poetry, much of it on ecological subjects.