Wombats and humans working together to free survivors from flooded warrens

In Murraylands, South Australia, floods have trapped wombats in their warrens for weeks. Wildlife rescuers have been rescuing them and, as they rescue them, the rescued animals have been digging their friends and relatives out alongside the human rescuers.
Wombats are indeed amazing creatures. See also "The strange and unforgivable decline in wombat appreciation in the 20th century."

Donations to Wombat Awareness
'Floods are a natural occurrence but when do we draw the line for considering natural selection when disease, starvation and human impact are already desecrating a species?'

Over 20 warrens lie beneath over 800 000 litres of water, WAO and a team of volunteers spent 6 days removing the water to free the trapped wombats!

In December 2010 an unseasonal deluge of rain hit the core population of the Murraylands wombats. The annual average rainfall is approx 250mls, some areas received 170mls within twelve hours leaving a trail of destruction. Entire burrow systems were filled with water, others simply collapsed under the weight of the water. Hundreds of wombats perished and even more were left trapped within their homes.

WAO sprung into action by launching a wide scale rescue mission pumping hundreds of thousands of litres of water out of burrows systems and manually shovelling dirt away from collapsed burrows where there was no chance for the wombats to escape.

A flood of this magnitude has hit the Murraylands wombats one other time in recorded history yet there was no rescue mission nor any recordings of how the wombats coped with the catastrophe. WAO's work was unprecedented.

Little bodies were removed from the water to avoid contamination whilst the Department of Environment and Natural Resources kindly lent WAO Fire Fighting Pumps to remove water from viable locations. Wildlife Victoria sent two teams of volunteers from their Disaster Response Team and the SES kindly donated their services. Burrow systems by the hundreds were effected and WAO targeted to open at least one hole in each warren to allow chance of escape but the problem was huge.

After seven days volunteers started to see something amazing - freed wombats were starting to dig trapped wombats out of their burrows!! This has never been seen or documented before!

As time went on, more and more burrows were re-opened by other wombats...truly a beautiful sight for weary volunteers.

Today, over a month after this tragic event WAO is still rescuing wombats suffering from secondary complications due to the flood. Emaciated wombats from being trapped in their burrows for prolonged periods of time (there is still no food available as it is SA's dry season), pneumonia and an unseasonal influx of Sarcoptic mange continue to plague this already damaged colony. 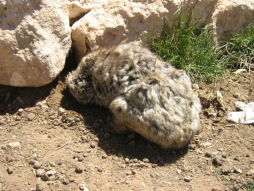 Little Miss Portee was trapped in her burrow for nearly 3 weeks, starving, covered in mould and suffering from pneumonia, she finds comfort at the WAO Intensive Care Unit
Donations to Wombat Awareness for this flood rescue work and aftercare.