Mr Agius says local South Australian authorities have approved the ‘extermination’ of the wombats over claims they were damaging the farmer’s equipment when he runs them over.

Mr Argiss is calling on the Yorke Peninsula District Council, Aboriginal Lands Trust, The Department of Water and Environment, and Fraser Ellis MP to revoke the decision.

According to the Aborginal Elder, 12 wombats were illegally shot in the area recently by the same farmer (see picture).

“The brutality has disgusted our community. The community has not been consulted so I am speaking out as a Traditional Owner for those with no voice, and the community residents.

“We are connected to these animals, they feature in our cultural knowledge of evolution. Like us, these animals have lived on the land for thousands of years and we need everyone’s help to protect them from genocide. It must be stopped before it happens.”

This article reproduces a leaflet written by Jim Quirk, who was my father. The leaflet advertised a 'Nature Show' at the lower Melbourne Town Hall in 1966. The Field Naturalists Club of Victoria and the Society for Growing Australian Plants sponsored the Nature Show to help the plight and status of the wombat in Australia. I wonder if the same results could be achieved today. Have we advanced at all? Reading of the particularly dire conditions for wombats in South Australia, it would seem not. And, think of the kangaroos who suffer so badly still at the wrong end of rifles and who are caught up so messily and tragically in urban development. The discursive nature of the account below may be a reflection of a time when conservation was a battle but our lives were not as stressed and rushed as they are today. We were more able to organise politically for causes in NGOs which were not then commercialised.

In Murraylands, South Australia, floods have trapped wombats in their warrens for weeks. Wildlife rescuers have been rescuing them and, as they rescue them, the rescued animals have been digging their friends and relatives out alongside the human rescuers.
Wombats are indeed amazing creatures. See also "The strange and unforgivable decline in wombat appreciation in the 20th century."

Donations to Wombat Awareness
'Floods are a natural occurrence but when do we draw the line for considering natural selection when disease, starvation and human impact are already desecrating a species?'

Over 20 warrens lie beneath over 800 000 litres of water, WAO and a team of volunteers spent 6 days removing the water to free the trapped wombats! 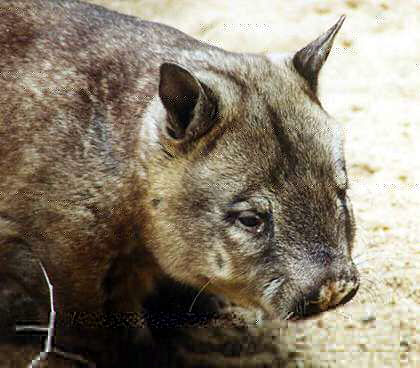 The following disturbing article was found on the ABC website: http://www.abc.net.au/news/stories/2009/10/01/2701495.htm?site=news "Farmers are illegally slaughtering thousands of wombats in South Australia, a nature group says. Brigitte Stevens from the Wombat Awareness Organisation says burrows of southern hairy-nosed wombats are being bulldozed or blown up on Yorke and Eyre Peninsulas and in the Murraylands.

She says farmers can get permits to destroy a few wombats, but that it not a licence to wipe out the entire population.

"There's not enough or not good enough regulations on what actually happens to the wombat if those numbers are being killed," she said.

"Now I know it's difficult because I know you need a lot of staff to be able to do that. But it's really hard for us when we're trying to stop people killing them illegally - if it's allowed by the government through permits, how are we going to stop it?"

Ms Stevens wants the Department for Environment and Heritage (DEH) to act on evidence the group has gathered. 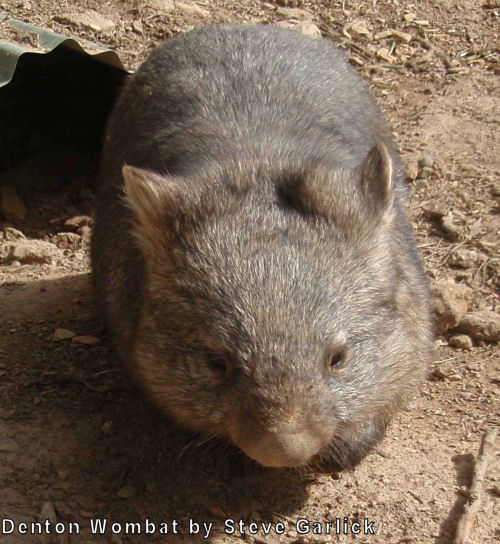 Steve Garlick, a professor in regional economics, and his wife, Rosemary, who is a general practitioner, spend a lot of their time going out to get injured Australian native animals and bring them back to their property. There they undertake comprehensive rehabilitation. They house the animals for a time and then release them.

Most of the animals - even the wombats - are pretty peaceful characters, but Denton Wombat was an exceptional character and this is a marvellous story. Don't let it prejudice you against wombats though! Read more about wombats here.

Not your typical wombat

Denton was never your typical wombat. Named because of all the dental work to fix a fractured jaw when his mother was killed by a motor vehicle, he was happiest sleeping in a red backpack. Initially this was alright but as he continued to grow this soon became impractical. ‘Attack’ was his mode of operation with anything that moved and several of us have the scars on our legs to prove it. He would get up on his hind legs and bring his teeth down into your flesh. He was impossible to outrun and he would knock our in-care kangaroo joeys over like nine pins given half a chance.