No politicians with ideas, please!

Kevin Rudd and Malcolm Turnbull like many other politicians seem to think of themselves as ideas men. Do we really need politicians with 'ideas' or are they a liability? 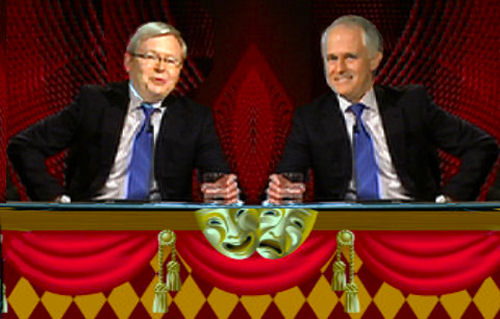 On Monday night’s Q and A on ABC1 TV, guests Kevin Rudd and Malcolm Turnbull, from the comfort of their respective non party leadership positions (and in Kevin Rudd’s case basking in the imagined glory of the way he would now be leading the country had it not been for the 2010 leadership coup) quipped and bantered between themselves throughout the show.

Their harmonious good humour finally evoked the question from an audience member as to whether they had considered jointly forming a new political party, to which they both agreed that they had not. Kevin Rudd even surpassed himself in wit saying that they would not be able to agree on the leadership (of such a party)! During the program I heard one of them say that he had “a few good ideas” as did the other (giving the other due credit ) In other words they are a pair of mutually self proclaimed “ideas people”. I hate to think what those ideas are and am 100% certain that they would involve a huge population for Australia. Both men are on record as advocating this.

I suppose whichever of Tweedle Dum and Tweedle Dee said that they of had "ideas” thought that the idea of their ideas would be enticing to the audience.

But do we really need politicians to have ideas?

It always seems to be the materialization of someone’s big idea that clashes with the needs and wants of others and with nature. Politicians should be in the business of appreciating what we have and trying to withstand assaults on it rather than contributing their own ideas to its transformation along with the myriad developer and big business ideas that we are assailed with.

Two megalomaniacs dreaming up an Australia which is nothing like the Australia we live in is not what Australia needs. The best tools for a politician are a set of guiding principles and a philosophy.

Politicians with ideas just make more work for the rest of us. We have to correct them, modify them, try to premept them and pay for their projects whether we like them or not. We have to interrupt our own lives to try to avert the disasters their ideas can become.

It is a bit like cleaning up after a very imaginative and active child has been in the house all morning playing in the kitchen cupboards. The unfortunate difference with politicians who have ideas and want to make their mark is that the results are more costly. We have far more difficulty controlling them and we can’t lock them in their rooms when they make a mess.

Ideas are great for those in creative fields. If an artist has an idea and chooses to put it on paper or canvas, that’s fine whether I like the idea or not. Unless I am forced to hang the picture in my house it doesn’t affect me. A friend’s ideas expressed in very bad poetry are OK unless he asks to read them aloud to me. It’s when you get into the materialization of large scale ideas such as buildings, roads, bridges and other engineering works as well as large populations that the sensitivities of the rest of us collide with the ideas person.

I’ve convinced myself. We do not need politicians with ideas. We actually need them not to have ideas, and for them to take expert independent advice for their decisions. Apart from this I would appreciate it if they could keep things running smoothly in the background so that I can get on with my life.

Turnbull & Rudd are both Big losers

Both these politicians represent businesses and both desire big population growth. It's a tunnel-vision strategy, with no perspective or consideration of the impacts or the future. Growth now will deny future generations of "wriggle room" or the benefits of decisions we are able to make today. Maximising our population now will deny people in the future any good living standards and they will be lumbered with all the scarcity and problems associated with peak oil, climate change, homelessness, loss of food bowls and arable land. No wonder the public are questioning our democratic system. Immigration continues to be ramped up even further without consulting the public. Many people are feeling discarded, through lack of occupations, jobs, affordable housing and the squeeze of rising costs of living. Kevin Rudd's "big Australia" was his death knell, and despite Malcolm Turnbull's concern about climate change, he contradictorily wants to continue with population growth - it's "good for the economy"! Both are losers.

These two parasitic puppets are both scum and belong on the scrap heap, where the likes of Dillard and the rest will end up after they have destroyed Australia..

The author of this otherwise perceptive article does not seem to have noticed that there were a couple of women on the panel too: Heather Ridout (banker) and Judith Sloane (murdoch journo). Each seemed to have the role of supporting one of the Big Men. Ridout was agreeing Rudd and Sloan was doing a right wing thing for Turnbull. But all four were right wing - Growth, GROWTH, GROWTH!