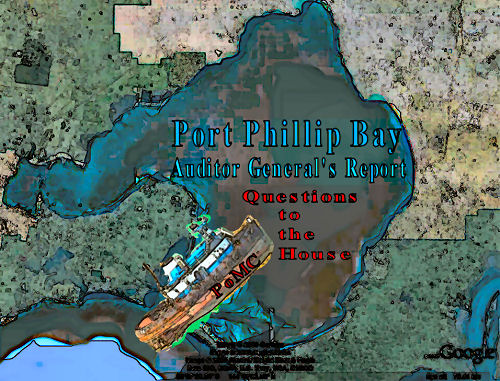 Ms Pennicuik, Greens member of Victorian Parliament, has drawn attention to discrepancies between figures apparently given the Auditor-General by the Port of Melbourne Corporation and figures obtained from them by the Supplementary EES statement process and the hearings and the Standing Committee on Finance and Public Administration.

If it is true that 96% of ships were able to use the Port of Melbourne with no problems, does this discrepancy mean that the Auditor General will have to review his report and the validity of the PoMC's business case, quality of information and practice?

Dredging has cost Victorians enormously already financially, socially and environmentally. Confidence is not high in the PoMC. It is to be hoped that Ms Pennicuick will follow this matter up urgently. Any member of the public wishing to find out more could put questions to Ms Pennicuik to ask in Parliament.

"I am speaking today on the Auditor-General's report on the channel-deepening project. This project has been the subject of much public interest since it was first announced in 2002. That interest continues as, unfortunately, dredging is under way. It is a mega-project with a scale of dredging way above anything seen before in Port Phillip Bay -- or pretty well anywhere else in the world. "

" a robust business case, complying with better practice guidelines and providing government with the type and quality of information it needed to endorse the project "

" contracting arrangements, where the corporation followed sound processes in determining how works should be procured and the contractual terms. "

"The Auditor-General concluded that all of these were in order. "

"I am pleased that the Victorian Auditor-General's Office chose to audit the channel-deepening project, because due to public and community concern about the scale and risks of the project it certainly needed independent analysis, which has been sadly lacking hitherto. This report is a valuable contribution to the ongoing debate about the pros and cons of channel deepening, which, it must be remembered, is still happening. It is not a finished project, a point the Auditor-General himself acknowledges. It is still continuing, and he has not in fact audited a completed project. "

Was Channel Deepening needed or will it ever be needed?

"The Auditor-General's report is, perhaps, unable to answer some of the fundamental questions about channel deepening. The first question is: is it, was it or will it ever be needed? The second question is: will it provide any benefits to either exporters or importers or to the people of Victoria? These questions cannot be and are not answered by this report. "

"The fundamental question regarding the channel-deepening project has always been the need for it and the extent to which ships are actually depth constrained in the port of Melbourne. "

Wide range of figures has been quoted by PoMC

"The Auditor General's report states that 50 per cent of ships are unable to come into the bay fully loaded. I asked the Auditor-General at his briefing yesterday where he obtained that figure from; he replied that he had obtained it from the port. Elsewhere in this report it states -- in fact, it recommends -- that the Port of Melbourne Corporation start to collect figures on this. "

"In fact it does not collect data on what ships are able to come in and out of the bay and are depth constrained. That was an assertion by the port, and it is unfortunate that that figure was used in this report. "

"The Auditor-General then went on to say that in order to measure the benefits the port should start collecting figures on what ships it feels has made use of the benefits of the project. "

"The other benefits of the project, as they were raised in the briefing, are to be measured by reduced costs to exporters and importers. Certainly information that has come to us is that costs to exporters are rising, because they are paying a $60 channel-deepening levy, whether they need it or not. Many exporters have said throughout the lead-up to this project that they did not need or want the project, and they did not want to be paying for it. They are now paying for it. "

"It will be interesting to see whether, through the life of the project, that measure -- the reduced costs to exporters and importers, when they are in fact rising -- ever comes to be seen. "

We are a community mainly of consumers

Here in Australia, until the 1980s, we were able to produce our own cars, televisions, clothing, fabrics, shoes and many other consumer goods. What has happened? Now we are a nation of consumers, depending on imports from overseas, quite often from China. Of course, we need to deepen Port Phillip Bay to ensure all the imported goods reach the CBD! Free trade with Asia has produced unemployment and "Australia made" products are more often than not produced overseas or have imported ingredients. Australia is being bastardised by imports and our population is growing but we are relying on foreign producers to prop our economy up.

Would we want heavy industry encouraged in Australia to improve our balance of trade, or prefer these be done elsewhere, import them at high cost and leave our natural environment healthier and intact? I am not advocating encouraging China to destroy more of its natural environment, but in a selfish way I prefer the Three Gorges Dam is there than here. It has become the world’s largest hydro-electric power station, but flooded important cultural heritage and displaced some 1.24 million people. Containerised seafreight into Melbourne has long taken the deep water route around the Mornington Peninsula. Ecological standards and tests must prevail to ensure no cost cutting short cuts are dredged through shallow marine environments of high conservation value. Consumers of imports need to pay more for the higher costs of getting them to market. This will enable local producers to better compete. The challenge is to separate inflation on imports from pushing up prices on local production. Economic sustainability doesn't require endless growth year on year. What's wrong with a static profit year on year? The tests of sustainable consumerism should be triple bottom line health - social health, economic health and ecological health. Push one too far and you downgrade the others.

In-house Award an insult to Victorians

In DT Dredging Today you can read: "Port of Melbourne’s dredging project wins 'Australian infrastructure award' The recently completed Channel Deepening Project in Port Phillip Bay, Victoria’s largest ever marine infrastructure project, has beaten strong competition to win the prestigious National Infrastructure Award. Roads and Ports Minister Tim Pallas welcomed the award today and said the Victorian project had prevailed over other significant nominations, including Sydney’s $1.8 billion desalination plant and Brisbane’s $3 billion Clem Jones Tunnel." All these projects were deeply unpopular and undemocratic, unnecessary except for the population growth forced by the government on the people of Australia, and extremely expensive, using tax-payer's money. The dredging project signified pain and shame in Victoria, because it trampled democracy to get its way. It is therefore grotesque that anyone should think to hand out prizes for such projects and sad that Victorians must put up with this from an irresponsible government with so many links to infrastructure investment that they may not really qualify as a government anymore, but more a commercial development corporation. It's pretty hard to find out anything solid about this award. I have googled and cannot actually pin it down. Who supplies the prize, what is the prize, what are the criteria? If anyone knows, please let us know.