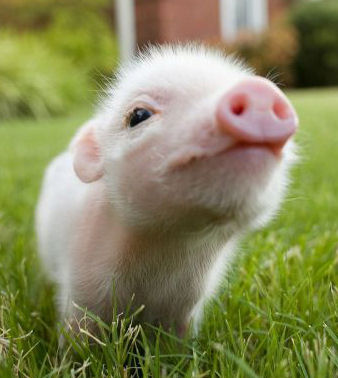 Source of photo: URL:Piglets Are As Cute As You Thought They Were, But Far More Interesting

On Tuesday, The Humane Society of the United States released undercover video footage revealing cruel treatment of animals and inhumane conditions at a Wyoming pig breeding facility owned by a supplier to Tyson Foods. The investigation revealed workers kicking piglets like soccer balls, swinging sick piglets in circles, and ruthlessly beating mother pigs. Along with individual acts of animal abuse, this investigation also highlights the suffering pigs endure when locked in metal "gestation crates" where they cannot even turn around for nearly their whole lives -- a standard pork industry practice.

The Platte County Sheriff's department and Wyoming Livestock Board are now investigating the abuses for potential violations of the state's anti-cruelty statute. And, since the release of the investigation, Tyson has suspended its purchases from this supplier. However, Tyson needs to do more: It must stop allowing its suppliers to confine pigs in gestation crates.

Burger King, McDonald's, Wendy's, Safeway, and other major food companies have announced, at the urging of The HSUS, that they'll remove gestation crates from their supply chains. Tyson is lagging far behind and still defends this extreme confinement. We need your help to move the company to do the right thing. Please help pigs by urging Tyson to stop allowing them to be confined in tiny gestation crates.