In a press release entitled, "North America leads the world in production of shale gas," the US Energy Information Administration (EIA) boasts long and loud that US gas quantities extracted by fracking shale beds vastly exceed production in Canada and China. Energy resources analysts, however, are critical that the EIA never releases balanced accounts on petroleum and gas production which would reveal the growing costs of extraction.

These extraction costs include threats to human water supplies, which some believe could threaten civilisation and human survival in large US populations, including New York,[1] increasing fuel required to extract more fuel from more difficult places, massive earth subsidence and drastic landscape change, destruction of farmland, poisoning of soil, disturbance of pastoral and agricultural production and, most strikingly, destruction of democracy and property rights.[2] France has outlawed fracking for these reasons. [3]

I contacted Fawzi Aloulou, the specialist spokesman for the following EIA report with questions about this. I asked him, whether he had information about the amount of energy and the financial cost of extracting this natural gas from the shale? I put it to him that, as he would be aware, we have gone from an earlier situation where liquid petroleum gushed from the ground and gas was blown off into the atmosphere to one where great lengths have to be gone to to get an energy return on investment.

I wrote to him: "The EIA figures don't show the changes in the costs of extraction for crude and other liquids over time, nor for [fracking shale]." I added that candobetter.net would like to publish the EIA reported findings but we feel that they need more comment re the energy and financial cost side.

Dr Fawsi thanked me for my interest in the EIA's work but replied, "We don’t publish the financial cost of extracting natural gas from shale for a simple reason: cost keeps changing over time as function of depth of the shale, depletion rate and technology improvement."

To this I responded with, "Surely an annual report could average them out?"

Dr Fawsi replied, "That’s a good guess. However, our cost estimates are model-generated and we do not post them in public domain."

My further question as to where I might find an objective source on this major factor in energy production has so far received no answer. But I am interested to know that the EIA does model the problem. There is probably nothing more important to the American and global public likely to be affected by increasing environmental and social turmoil associated with trying to keep up petroleum-type resources to maintain economic growth in an era of dwindling traditional fuel source forms.

Below is Dr Fawsi's report. At this point in time no-one I know can say what the amount of gas produced would look like if these graphs also revealed and deducted the amount of gas and other resources that were used up to produce these apparently stunning surpluses. For more on these unmentioned factors have a look at our pages on fracking and coal-seam gas.

The United States and Canada are the only major producers of commercially viable natural gas from shale formations in the world, even though about a dozen other countries have conducted exploratory test wells, according to a joint U.S. Energy Information Administration (EIA)/Advanced Resources International (ARI) study released in June. China is the only nation outside of North America that has registered commercially viable production of shale gas, although the volumes contribute less than 1% of the total natural gas production in that country. In comparison, shale gas as a share of total natural gas production in 2012 was 39% in the United States and 15% in Canada.

Shale gas dry production in the United States averaged 25.7 billion cubic feet per day (Bcf/d) in 2012, while total dry production averaged 65.7 Bcf/d. In Canada, total dry natural gas production from the two major shale plays—the Muskwa-Otter Park shale formation in the Horn River Basin of northern British Columbia and the adjacent Montney Basin that spreads over British Columbia and Alberta—averaged 2.0 Bcf/d in 2012, while total Canadian production averaged 14.0 Bcf/d. Gross withdrawals from Horn River and Montney averaged 2.5 Bcf/d in 2012, and reached 2.8 Bcf/d by May 2013. The potential for higher production from these two plays is currently constrained by limited pipeline infrastructure. 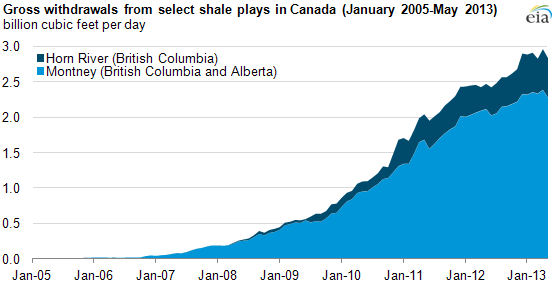 China was ranked as the largest holder of shale gas resources among the 41 countries assessed for technically recoverable shale resources in the study released by EIA/ARI this past June. The Chinese government has not officially reported on shale gas production, but some independent Chinese energy analysts have claimed commercial production of at least 0.003 Bcf/d of shale gas, mainly from the Sichuan Basin.

Map of China with EIA/ARI shale gas/oil assessment, as explained in the article text. 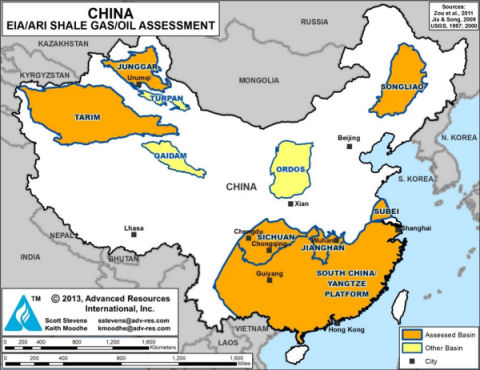 [1] "In Gaslands it has been suggested that, if completely developed, the huge Marcellus shale formation in the United states, under the current very poorly regulated, chaotically individual and uncoordinated system of drilling, could permit as many as 400,000 new wells. This might endanger the supply of water to New York, which would be catastrophic."
[2] Articles on social, vital and environmental costs of fracking
[3] Whilst official pronouncements try to normalise fracking as inevitable in the United States and Canada, the French experience highlights the coercive and outlandish application of this technology. More debate is needed and for debate, organisations like the EIA should release more information about these costs.

"France says "No" to fracking based on US experience

This parliamentary decision is yet more evidence that the Napoleonic system in France and Europe is far more democratic - in protecting peoples' rights and communal (and national) assets and vital resources - than the anglophone systems in their various forms in Britain and her current and ex-colonies. America, Canada, Australia are among the least democratic countries in the world, with vast and growing differences between the haves and the have-nots, in legal systems which cannibalise and destroy their own community, citizens and resources. The reason that these countries are not yet obviously reduced to the poverty of Haiti is that their citizens started out with more resources per capita. As commonwealth is transferred more and more into private hands in those systems, people who have to date been able to survive, will not survive. The growing numbers of homeless and hopelessly endebted are indicators of the social unsustainability of the current economic and legal systems in Australia, America and Canada. In France and the rest of Europe, it is virtually impossible for citizens to be left without shelter unless they voluntarily opt out - as some homeless do - albeit with every attempt made to shelter them each winter.

High on the list of reasons against fracking in France was the risk of contamination of water supply and its impact on agriculture and human health." Source: First published as /?q=node/2348#comment-6275

Very good job presenting accurate, important information. The very fact that the EIA researches net energy, but refuses to publicly release any results, is quite telling. Perhaps they know what other energy researchers know, that net energy is declining for all fossil energy sources, but will not say this publicly due to political and market concerns. Thank you for publishing this accurate report. Your conclusions are the result of rigorous investigation.

Within the last couple of years ASPO-USA colleagues and I have communicated with and met with top EIA and DOE officials who constantly lied to us about what they knew and what they didn't know. The New York Times obtained internal emails showing EIA technical experts knew about serious oil & gas constraints while EIA top managment was spouting the Cornucopian concensus.

Some relevant articles on this:

Net-energy analysis became a public controversy in 1974 when two stories made the news. In the first, Business Week reported that Howard Odum had developed a "New Math for Figuring Energy Costs." Among other results, this new math indicated that stripper oil well operations were energy sinks rather than energy sources. According to this analysis, these operations could be profitable only when cheap, regulated oil was used to produce deregulated oil. The other net-energy story of 1974 was the study of Chapman and Mortimer asserting that a rapidly growing nuclear program would lead to an increased use of oil rather than to the desired substitution (see Net-Energy Analysis by Daniel T. Spreng, Oak Ridge Assoc. Univ. & Praeger, 1988).