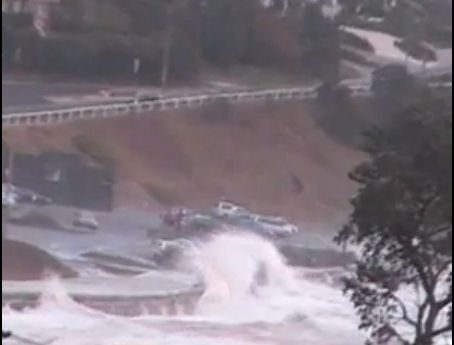 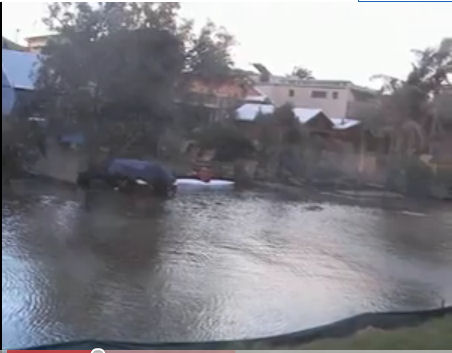 Click on second picture to see film of "Storm tide views of CBD and Houses on Kananook Creek, Frankston"

The films made by Sheila Newman and including still-footage by James Sinnamon, show very high water at a time when the tides themselves were not at their highest, but rain was heavy and run-off had increased in storm conditions. This means that a very high tide could be devastating under similar rain and storm conditions.

Sue Pennicuik (Greens, Victoria) says that analysis of tidal data supports residents' reports of higher Bay tides since channel deepening. But even without higher tides overpopulation has made old conditions more dangerous. Films made by Sheila Newman and including still-footage by James Sinnamon, show very high water in a creek at a time when the tides themselves were not at their highest. What caused the very high levels in the mouth of Kananook Creek, Frankston, were increased volumes of run-off from increased hard surfaces associated with more buildings to accommodate population growth in Frankston, plus the very heavy, tropical style rain on top of the storm-tide. This means that, even without sea-level rise, a king tide could be devastating if it occurs during a similar short period of high rain and wind. Note that the deepening of the channel from the ocean to Port Phillip Bay was done to accommodate much bigger ships justified by projections of greater volumes of trade associated with the bigger populations in Australia as encouraged undemocratically by her state and Federal governments.
ABC TV Stateline 7.30 PM this evening (2 July 10) also has a story on the evidence of higher tides since channel deepening.

"There have been growing reports of higher tides, beach erosion, faster currents and an increase in swell (surge from Bass Strait) since the Entrance to Port Phillip Bay was deepened,” Greens MP, Sue Pennicuik said today.

The Office of Environmental Monitor (OEM) is reported* as saying that there is no evidence to suggest that dredging is to blame for erosion at Portsea beach; and that the most likely explanation was natural erosion caused by the local impact of storms and seasonally high tides, exacerbated by the swell rolling in from Bass Strait.

“Tidal data that I have obtained from the Port of Melbourne Corporation and have had analysed, supports what so many residents, swimmers, divers and other businesses in the southern part of part Phillip Bay have been reporting since channel deepening: that tides are higher in the south of the Bay” said Greens MP, Sue Pennicuik today.

“Preliminary analysis of wind data from the past ten years suggests that wind beach erosion, particularly at Portsea was not caused by seasonal weather events alone,” she said.

"I am very worried about the tidal changes that are being seen at many places around the south of Port Phillip Bay," said Ms Pennicuik. "It is one of the most serious effects of the channel deepening project that the government was clearly warned about at the time.”

“The preliminary analysis that I am releasing today strongly suggests that the average daily high tides have increased significantly at four points in the south of the Bay, by much more than was predicted by the Port of Melbourne on the basis of ‘expert advice’ in the Channel Deepening Project (CDP) Supplementary Environmental Effects Study.** However, more data is needed about tides, swells, currents and weather events to be able to know for certain what is happening in the south of the Bay, Ms Pennicuik said.“

"Unfortunately, the five metres of sea bed and rock can't be put back at the Entrance and Port Phillip Bay may be permanently damaged as a result of the expensive channel deepening project that we didn't need,” she said.

The storm-tide associated with the flooding recorded in the films on 26 April 2009 above did not occur during a king tide. If the conditions had been similar and it had been a king tide, the damage and danger would be much greater. In the past few weeks there have been higher tides than in April 2009, but the amount of rainfall coinciding was not as great as in April 2009. Residents have the impression, however that Kananook Creek is running faster since the channel deepening in Port Phillip Bay. If this is true then erosion will be greater on the banks and the land where houses on Long Beach are situated.

Why does rain pose a new problem?

The state government (under Kennett, Bracks and Brumby) have made policies to increase development and population in Frankston over objections from many residents. The associated development has increased the hard surfaces (in the form of built surfaces like roofs, roads, gutters, pavements etc) and decreased the big tree coverage. Blocks have been moonscaped and smaller trees have been substituted for the old ones removed.

This decreased vegetation mass has the effect of decreasing the absorption and transpiration once provided by tree cover, which kept water tables down and absorbed a lot of running water. Now, when there is a lot of rain, more runs down into the bay via the hard surfaces and drains and it runs faster. During the storm tide in April 2009 Kananook Creek was flooded by water from drains and surrounding hard surfaces as well as by the incoming tide which was driven by high storm-winds. On this particular day the low pressure system was 997.7, the maximum wind gust was 93, the high tide was .92 cm and the rainfall was 30mm.

If this flooding from the hills had met with a king tide what would have happened to the houses, businesses and residents along Kananook Creek?

The Council will have to redo their planning scheme where the Land Subject to Inundation Overlays did not correlate with the land contours and did not accommodate the changes that were brought on by overpopulation and overdevelopment in the April 2009 situation.

In the absence of rain, storm-tide-surges still highly problematic

What will happen to Seaford, the next suburb, which is much lower than Frankston, if these trends continue?

Melbourne Water also seems to have been taken by surprise and to have used old data for Frankston Beach in the design of new infrastructure because new data was not available due to the removal of a Bureau of Meteorology weather station at the end of Frankston Pier.

Frankston has the longest reach of westerly winds in the bay and the storm surges rely on prevailing westerlies. For instance, when tide levels are .389mm in St kilda, they may be .730mm in Seaford. In Frankston, they would be higher again. The removal of the weather station makes information for Frankston elusive, just at a time when it is crucial.

All this indicates that the state of organisation and technology and planning in Victoria is not of a sufficiently high standard to predict or deal with the impacts of accelerated and additional development and population growth. The government departments are not competent for the demands they have been generating. The promotion and engineering of population growth and development was done against public opinion. This makes any impact, particularly any damage to person or property, all the worse, since it would have been avoidable if the governments had listened to the public.

Bigger pipes were put in under the McCoomb reserve, on the bend of the creek near the mouth, adding to the inflow rate and volume. These pipes should probably go out into the bay. It has been suggested by a resident that all big buildings should have retention pits. Others have called for no more building permits to be granted and for massive replanting of trees above the flood-level.

The Future Coasts site finds the likelihood of tropical style rains to be increased, with more storms in this area. Storm surges can virtually double height of water over the highest tide. Sea level rise on its own may not be the worst problem in the future; it will be more storm surges.