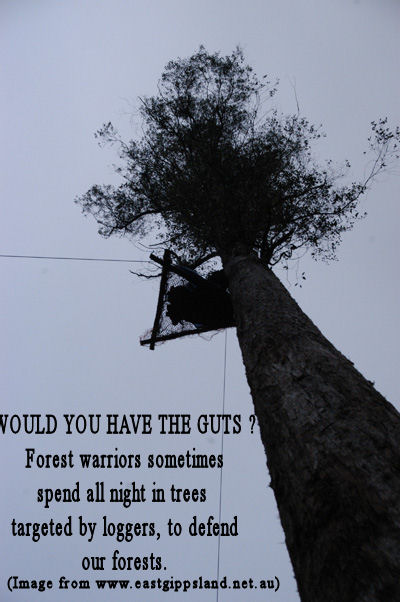 The recent Auditor General's Report on the incompetence of the Victorian Government's wildlife statistics collection and maintenance mean that the Victorian government could not logically have the authority to make decisions about sustainable forestry where local fauna habitat is affected, in the opinion of this candobetter.org writer and environmental sociologist. Because of this, it seems to me that Environment East Gippsland has clearly won its case in advance. It will take years, decades, maybe half a century for the Victorian government to repair its statistical collection. But will the judges be aware of just how bad the government's information is? We have to make sure that they do by making this information so well-known that it cannot be avoided. So please pass the link to the Auditor General's report around. 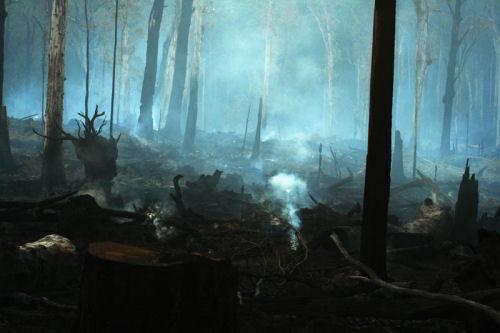 Environment East Gippsland's (EEG) lawyers are working overtime getting the case and expert witness reports prepared for the court case which starts in just over 4 weeks. It will be at the Sale County Court (Supreme Court does regional hearing). EEG people have been offered some accomodation but could probably use more.

The case could blow out to over the two weeks set aside for it. The forest-related Acts can be complex so loads of paperwork needs to generated. EEG volunteers are still flat chat trying to raise more funds to ensure they can cover the immediate costs. Meanwhile Brown Mountain’s wildlife is getting around the old growth forests in peace. Volunteers are still maintaining spy cameras trying to get more critters on film.

The summer season for protesting by our very own Avatars in old growth logging areas is happening with 5-6 brave and ethical people arrested on summons so far. The forests being targeted have been up in the Bonang River headwaters on the Errinundra Plateau. Currently between 20-30 people at the
camp here in Goongerah. VicForests response is to say protesters have stopped important machinery from being used for fighting fires. This is untrue. 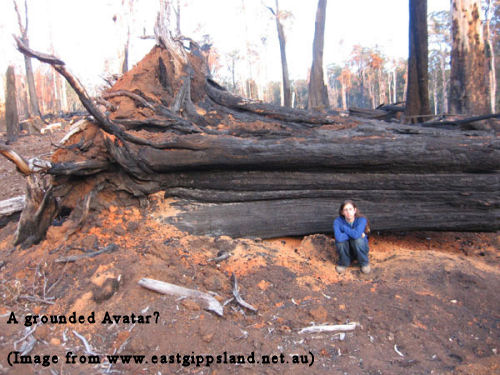 Could I recommend the film Avatar as an example of what our Wildlife and Forest Warriors in Australia are defending and the forces that seek to destroy it? Brown Mountain, as you can see from the photos, has amazing huge trees and is a different and beautiful world. Searching for economic growth through these limpid havens is like searching for Unobtainium. It is a gross act.

Rob Quantok will donate half profits from regional performance to EEG

The very kind and funny actor, Rod Quantock is holding his “Bugger the Polar Bears – this is serious” show at Warrandyte on Sat 20th Feb 7.30. Bless him!

Half the profits he raises will be donated to EEG to help with our costs. Tickets $30. Ph: Ingrid 9870 8378 for details. (will send more details soon).

To help EEG's marketing and fundraising they would love the help of someone who has a good grasp of Photoshop or other image programs – to put a hand and an old growth forest together on their website.

Did we all forget again this year to nominate Jill Redwood and Rod Qantok (along with Julianne Bell, Jill Quirk and Mary Drost) for the Australia Day awards? Try to remember next year. Maybe we should have our own awards.

#2b2; padding: 8px 8px 8px 8px; margin: 16px 16px 16px 16px;"> Tim Murray of Immigration Watch Canada asks of what overall benefit are personal lifestyle choices made to lessen our individual impact on the environment, when the good they achieve is far less than the harm done by population growth actively encouraged by our governments.

This article was originally published on Tim Murray's web-site, sinkinglifeboat.blogspot.com with the title
THE LIMITS OF SUSTAINABLE LIVING: CBC Darling Pitches Gore's Bromides.

Somebody hand me a barf bag. Quick. I was in the supermarket yesterday and came upon one of those innumerable escapist books on how we can ignore the big picture and the root cause of the coming apocalypse by retreating into private solutions. It was a book by cheery CBC talk show personality Gill Deacon called “Green for Life”, a compendium of some 200 “eco-ideas” (ego-ideas?) on how to pack school lunches, plan picnics, birthday parties and weddings, decorate and do what Sir Richard Branson called, in his endorsement, “the simple things in your everyday lives that will positively impact our future.” It is Deacon’s hope that just living sustainably in this fashion will become normal. Branson’s “normal” of course is burning up the stratosphere with jet trails all over the globe and investing in biofuels that entail the destruction of rainforests in Brazil, Indonesia and Malaysia. But those are just one or two simple things.

Deacon established her credentials for lecturing me about sustainable living by giving birth to three sons, who collectively will emit 69 metric tonnes of GHG this year. She must be a bona fide environmentalist, however, because she was a director of the World Wildlife Fund of Canada in 2002 and demonstrates her love of wildlife by living in Toronto. You are familiar with the WWF. They suction money from dupes who think you can defend wildlife from population and economic growth by creating sanctuaries for it, while refusing to take positions on population growth and immigration in whatever country they operate. In their defence though, they at least divert donor money away from Nature Conservancy, who make similar fraudulent claims.

The WWF deserves notoriety for providing ammunition to pro-immigrationists by producing eco-footprinting data that purports to show Canada as capable of accommodating more people than it should. The 2000 Living Planet Report, for example, identified Canada as having a carrying capacity of 38 million, an estimate that Optimum Population Trust UK declared took no account of the unsustainability of Canadian agriculture due to serious soil erosion.

It is rather telling that Deacon would devote a section of her “Eco-ideas” to selecting the environmentally correct kind of lubricant to, as she puts it, “grease the wheels of your lovemaking machine.” Yet it is apparently acceptable to conceive three sons in Toronto, or six for that matter, so long as you don’t fuck up the planet with petroleum jelly. I suppose inflicting a large brood on the world is a matter of “personal choice” but tossing a plastic container in the landfill is not.

One Green eco-idea Gill left out, I notice, was for consumers to send a letter to Ottawa or launch a petition against an immigration policy that makes all of her 200 “little things” a joke. Deacon might also send an eco-idea to her employer, the CBC, to drop their euphoric coverage of Canadian foreign aid missions, like Harper’s trip to Haiti, so that Canadians busy with their “Green” lifestyle might learn that their tax money is encouraging people in Haiti, Afghanistan and Africa to have four and five children each and ravage local environments for survival.

But one must not be too harsh with Gill Deacon of course. Cutting down her hypocrisy is like cutting off the head of a many headed hydra. There is a plague of these Green lifestyle books on the market. There is Adria Vasil’s “Ecoholic:Your Guide to the Most Environmentally Friendly Information, Products and Services in Canada.”. Kim McKay’s “True Green: 100 Everyday Ways You Can Contribute to a Healthier Planet”. Greg Horn’s “Living Green: A Practical Guide to Simple Sustainability.” Elizabeth Rogers’ “The Green Book: The Everyday Guide to Saving the Planet One Step at a Time”. And Ellen Sandbeck’s “Organic Housekeeping”, to name but a few.

The impetus for this myopic preoccupation with our personal lives can be traced to the famous entreaty by Al Gore in his documentary “The Inconvenient Truth”. There he states, absurdly, that “each of us is a cause of global warming, but each one of us can make choices to change that with the things we buy, with the electricity we use, the cars we drive. We can make choices to bring our individual carbon emissions to zero. The solutions are in our hands. We just have to have the determination to make them happen.” Gore does not appreciate that green consumers can never reduce their consumption to zero, and that an increase in the number of even green consumers is going to increase total consumption. The solution does not lie in the hands of individual consumers, but in the collective hands of citizens to effect political change.

The limits of green lifestyle habits can be illustrated clearly by a study conducted by Optimum Population Trust UK that found that one new citizen either born or admitted as an immigrant to Britain, wiped out 80 lifetimes of responsible recycling. Put differently, a lifetime of responsible recycling would only make up for one and one-quarter per cent of the damage done by a new citizen. Even if all of domestic waste was recycled, only 10% of the waste contributed by an additional citizen would be counter-acted.

It must be remembered that it is consumption that generates waste. While reducing our profligate per capita consumption is laudable and necessary, one must be aware that it is the number of “per capitas” which is relevant. Thus reducing our per capita C02 emissions from 23 metric tonnes to something reasonably obtainable will prove to have little effect if population growth is permitted to continue at 1.08% per annum.

Similarly our lifetime per capita consumption of 3.7 million pounds of minerals, metals and fuels, if reduced, will still be problematic if more people consume them even at a lesser rate. And turning off the lights for one hour, as we recently did in solidarity with other conservers globally, is a futile gesture if we allow population and economic growth to continue. Case in point. British Columbia Hydro encouraged customers with the thought that if they did that every night it would save enough energy to power an additional four thousand homes for an entire year. But as analyst Rick Shea of Salmon Arm, BC observed, “ British Columbians would apparently have to turn off their lights for about 6 hours each day in order to accommodate the provincial population growth in just one year. After four years of this, we will apparently have to leave our lights off permanently, 24 hours a day, to accommodate that growth.”

In summary then, the movement toward “sustainable living”, as represented by books like Gill Deacon’s “Green for Life”, is largely an exercise in ineffectual do-goodism and feel-goodism. If “every little bit counts”, it counts for little. If “it all adds up”, it doesn’t add up to much buried in a demographic avalanche. The call to “reduce, re-cycle and conserve” in the face of runaway population growth can only be likened to a cheerful cleaning lady tidying up a cabin in the Titanic as the ship is listing, making sure everything in the room is bio-degradable. She could never be relied upon to tell you the truth about the ship’s prospects, or yours, but she was hired by Captain CBC for her pleasant disposition and you will find her trivial advice entertaining.