Feed the world with Genetically Modified foods? The French Minister for Agriculture is preparing a new law to prevent GM crops in France as the European Court of Justice has questioned the health-risk basis of current French laws against GM. It probably suits GM patenters to keep the battle on this footing as a decoy because the major danger lies elsewhere - in loss of productive land tenure. In the US, meanwhile, the Public Patent Foundation (PUBPAT) has filed suit against Monsanto Company to challenge the chemical giant’s patents on genetically modified seed. The organic plaintiffs were forced to sue preemptively to protect themselves from being accused of patent infringement should they ever become contaminated by Monsanto’s genetically modified seed, something Monsanto has done to others in the past. 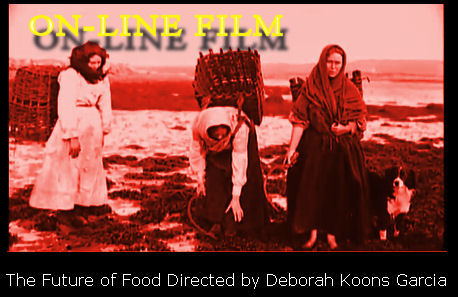 Yesterday (28 November 2011) the French Conseil d'Etat took European Court of Justice advice that France's laws against OGM have no basis because France has not provided evidence that OGM presents any especially high risk to human or environmental health.

If France want to continue to outlaw GM then it will have to make a new law. The Minister for Agriculture, Bruno Le Maire has stated that he is preparing one.

"We do not want to cultivate Monsanto 810 on our territory because the environmental doubts are too great," he said.

About 30 countries in the world produce OGM crops. At the moment four countries are major producers of OGMs, the United States, Brazil, India and Argentina. Lesser producers are Spain, Portugal, Sweden, Germany (representing about 2% of world production) and Poland, the Tchec Republic and Slovakia.

OGMs have been studied as if they were medications - with reviews to see if they are toxic or produce allergies. These results have shown no danger of medical toxicity or allergy. The problems lie in other directions.

Turbo-industrialised agriculture a threat to democracy

The major legal and social problem is contamination of non-OGM by OGM because it carries the risk of widespread loss of land and crop tenure and self-government. This is a simply enormous problem, because these seeds are privately owned. If OGM seeds are found on your property you can be forced to pay for them and there have been many instances of this where farmers have been bankrupted. (Cases cited at 11.47 minutes into the on-line film.)OGM in private hands causes dispossession and alienation from traditional food-sources, with starvation and enslavement to corporate producers in non-industrialised and industrialised countries alike. The French Revolution was all about winning the right to own land for all citizens from feudal regimes where only a small proportion of people owned the land and the means of production. The OGM Revolution is shaping up as a means to segregate land and food production again from most people, although its proponents present it as a means to 'feed the world'. 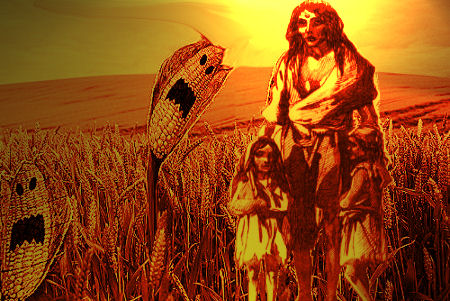 You can purchase a dvd of the new film: "The Future of Food". Below we have republished a statement about a new class action against Monsanto's industrial patents on OGM genes.

NEW YORK – March 29, 2011 – On behalf of 60 family farmers, seed businesses and organic agricultural organizations, the Public Patent Foundation (PUBPAT) filed suit today (http://www.pubpat.org/assets/files/seed/OSGATA-v-Monsanto-Complaint.pdf) against Monsanto Company to challenge the chemical giant’s patents on genetically modified seed. The organic plaintiffs were forced to sue preemptively to protect themselves from being accused of patent infringement should they ever become contaminated by Monsanto’s genetically modified seed, something Monsanto has done to others in the past.

The case, Organic Seed Growers & Trade Association, et al. v. Monsanto, was filed in federal district court in Manhattan and assigned to Judge Naomi Buchwald. Plaintiffs in the suit represent a broad array of family farmers, small businesses and organizations from within the organic agriculture community who are increasingly threatened by genetically modified seed contamination despite using their best efforts to avoid it. The plaintiff organizations have over 270,000 members, including thousands of certified organic family farmers.

“This case asks whether Monsanto has the right to sue organic farmers for patent infringement if Monsanto’s transgenic seed should land on their property,” said Dan Ravicher, PUBPAT’s Executive Director and Lecturer of Law at Benjamin N. Cardozo School of Law in New York. “It seems quite perverse that an organic farmer contaminated by transgenic seed could be accused of patent infringement, but Monsanto has made such accusations before and is notorious for having sued hundreds of farmers for patent infringement, so we had to act to protect the interests of our clients.”

“Some say transgenic seed can coexist with organic seed, but history tells us that’s not possible, and it’s actually in Monsanto’s financial interest to eliminate organic seed so that they can have a total monopoly over our food supply,” said Ravicher. “Monsanto is the same chemical company that previously brought us Agent Orange, DDT, PCB’s and other toxins, which they said were safe, but we know are not. Now Monsanto says transgenic seed is safe, but evidence clearly shows it is not.”

Many of the plaintiffs made statements upon filing of the suit today.

Jim Gerritsen, a family farmer in Maine who raises organic seed and is President of lead plaintiff Organic Seed Growers and Trade Association ased in Montrose, Colorado, said, “Today is Independence Day fo America. Today we are seeking protection from the Court and putting Monsanto on notice. Monsanto’s threats and abuse of family farmers stops here. Monsanto’s genetic contamination of organic seed and organic crops ends now. Americans have the right to choice in the marketplace – to decide what kind of food they will feed their families - and we are taking this action on their behalf to protect that right to choose. Organic farmers have the right to raise our organic crops fo our families and our customers on our farms without the threat of invasion by Monsanto’s genetic contamination and without harassment by a eckless polluter. Beginning today, America asserts her right to justice and pure food.”

Dr. Carol Goland, Ph.D., Executive Director of plaintiff Ohio Ecological Food & Farm Association (OEFFA) said, “Consumers indicate, overwhelmingly, that they prefer foods made without genetically modified organisms. Organic farms, by regulation, may not use GMOs, while other farmers forego using them for other reasons. Yet the truth is that we are rapidly approaching the tipping point when we will be unable to avoid GMOs in our fields and on our plates. That is the inevitable consequence of releasing genetically engineered materials into the environment. To add injury to injury, Monsanto has a history of suing farmers whose fields have been contaminated by Monsanto’s GMOs. On ehalf of farmers who must live under this cloud of uncertainty and isk, we are compelled to ask the Court to put an end to this unconscionable business practice.”

Rose Marie Burroughs of plaintiff California Cloverleaf Farms said, “The devastation caused by GMO contamination is an ecological catastrophe to our world equal to the fall out of nuclear radiation. Nature, farming and health are all being affected by GMO contamination. We must protect our world by protecting our most precious, sacred resource of seed sovereignty. People must have the right to the resources of the earth for our sustenance. We must have the freedom to farm that causes no harm to the environment or to other people. We must protect the environment, farmers livelihood, public health and people’s right to non GMO food contamination.”

Ed Maltby, Executive Director of plaintiff Northeast Organic Dairy Producers Alliance (NODPA) said, “It’s outrageous that we find ourselves in a situation where the financial burden of GE contamination will fall on family farmers who have not asked for or contributed to the growth of GE crops. Family farmers will face contamination of their crops by GE seed which will threaten their ability to sell crops as organically certified or into the rapidly growing ‘Buy Local’ market where consumers have overwhelmingly declared they do not want any GE crops, and then family farmers may be faced by a lawsuit by Monsanto for patent infringement. We take this action to protect family farms who once again have to bear the consequences of irresponsible actions by Monsanto.”

David L. Rogers, Policy Advisor for plaintiff NOFA Vermont said, “Vermont’s farmers have worked hard to meet consumers’ growing demand for certified organic and non-GE food. It is of great concern to them that Monsanto’s continuing and irresponsible marketing of GE crops that contaminate non-GE plantings will increasingly place their local and egional markets at risk and threaten their livelihoods.”

Dewane Morgan of plaintiff Midheaven Farms in Park Rapids, Minnesota, said, “For organic certification, farmers are required to have a buffer zone around their perimeter fields. Crops harvested from this buffer zone are not eligible for certification due to potential drift from herbicide and fungicide drift. Buffer zones are useless against pollen drift. Organic, biodynamic, and conventional farmers who grow identity-preserved soybeans, wheat and open-pollinated corn often save seed for replanting the next year. It is illogical that these farmers are liable for cross-pollination contamination.”

Jill Davies, Director of plaintiff Sustainable Living Systems in Victor, Montana, said, “The building blocks of life are sacred and should be in the public domain. If scientists want to study and manipulate them fo some supposed common good, fine. Then we must remove the profit motive.

David Murphy, founder and Executive Director of plaintiff Food Democracy Now! said, “None of Monsanto’s original promises regarding genetically modified seeds have come true after 15 years of wide adoption by commodity farmers. Rather than increased yields or less chemical usage, farmers are facing more crop diseases, an onslaught of herbicide-resistant superweeds, and increased costs from additional herbicide application. Even more appalling is the fact that Monsanto’s patented genes can blow onto another farmer’s fields and that farmer not only loses significant revenue in the market but is frequently exposed to legal action against them by Monsanto’s team of belligerent lawyers.
Crop biotechnology has been a miserable failure economically and iologically and now threatens to undermine the basic freedoms that farmers and consumers have enjoyed in our constitutional democracy.”

Mark Kastel, Senior Farm Policy Analyst for plaintiff The Cornucopia Institute said, “Family-scale farmers desperately need the judiciary anch of our government to balance the power Monsanto is able to wield in the marketplace and in the courts. Monsanto, and the biotechnology industry, have made great investments in our executive and legislative branches through campaign contributions and powerful lobbyists in Washington. We need to court system to offset this power and protect individual farmers from corporate tyranny. Farmers have saved seeds since the beginning of agriculture by our species. It is outrageous that one corporate entity, through the trespass of what they refer to as their ‘technology,’ can intimidate and run roughshod over family farmers in this country. It should be the responsibility of Monsanto, and farmers licensing their technology, to ensure that genetically engineered DNA does not trespass onto neighboring farmland. It is outrageous, that through no fault of their own, farmers are being intimidated into not saving seed for fear that they will be doggedly pursued through the court system and potentially bankrupted.”

The Public Patent Foundation (PUBPAT) is a not-for-profit legal services organization affiliated with the Benjamin N. Cardozo School of Law.
PUBPAT protects freedom in the patent system by representing the public interest against undeserved patents and unsound patent policy. More information about PUBPAT is available from www.pubpat.org."