This is a fascinating video of a huge protest in Sydney on 5 August 2012 and we have put up a video of it with a number of interesting interviews from marchers, with comments from what they think of the Bashar Assad Government to how they don't like the Australian Greens policy on this matter and believe that we are risking World War Three by backing intervention in Syria. There is also some background on how Syria has been the long-term host one of the largest refugee populations in the world, which makes you wonder why it doesn't receive more support from Greens and Refugee activists. It must seem ironic that some candobetter.net EcoMalthusians are more inclined to give Syria that recognition! Please let us know if you have views on the democratic status of the Syrian government; we find it hard to judge. All comments and greetings welcome. 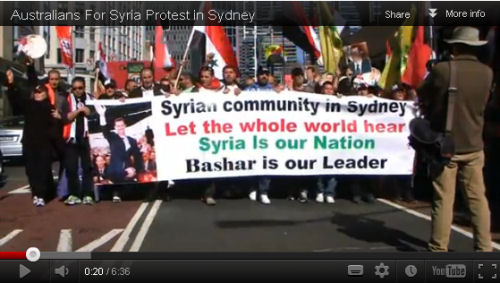 The video of this march also contains commentaries and is the product and published by Truth News with Reporter Hereward Fenton, who interviewed Naja (a Syrian Australian), Tim Anderson, and John Burgess (of the 911 truth movement). Thanks for your work at Truth News.

"On 5 August 2012 a rally was held in Sydney in support of the Syrian government by members of the Syrian community and Australians. Some four thousand people gathered peacefully at The Sydney Town Hall to express solidarity about the tragedy in Syria. A number of speakers, from various sections of the community, addressed the audience concerning the external forces that have invaded Syria and are fighting the [...][1]government. The people then marched peacefully to The Australian Department of Foreign Affairs in the Sydney city area, where more speakers addressed the people. Appreciation for Russia and China voting against the US proposed UN-NATO involvement were expressed. The meeting then peacefully dispersed." (Source: Commentary under video on Truth News) 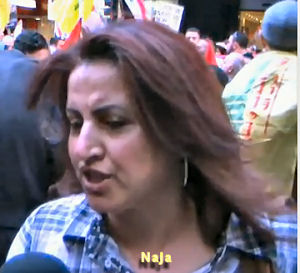 "I would just like to say one thing to the Australian Government. The Syrian president - 75% of the people elected him and only the Syrian people can impeach him. I just want to say another thing, that Barack Obama ought to go back home. Hands off Syria! We just need to raise our voice and we're sticking with the President! ... He is a very popular leader, he's a doctor and he studied in England. He doesn't kill his people. We've got militants in Syria. They're terrorists. They're not free Syrian army. They're killing people. I've got my family back home. They're kidnapping people. After they kill them, they amputate their body parts and they send them home to - bodies without heads, without arms - and we've got to put a stop to it. We want him to stay in power. That's my message. "

Tim Anderson spoke powerfully on behalf of the Syrian Government 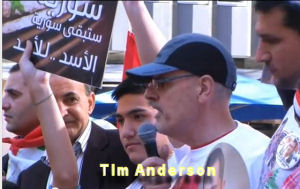 "People in this country are very ignorant of what's going on in Syria. That's understandable. That's not a crime in itself, but, what is not acceptable is the unethical use of this ignorance. All of those people from Hilary Clinton through the media through all sorts of silly people in this country - those people saying Assad must go - they have no ethical basis to make that sort of claim. They haven't understood that it's the foundation of the post colonial era, it's the foundation of human rights that a people have a right to self-determination and the Syrian Government is only for the Syrian people and no-one else. We see the result across the border in Iraq. What a tragedy in Iraq. What a great tragedy in Iraq! But we can't allow that to happen in your country. So I'm here just to say as a non-Syrian Australian, at least some of us here are in solidarity with you today."

Tim Anderson, author of Take Two, The Criminal Justice System revisited has the remarkable history of having been completely exonerated after erroneous conviction for the Hilton Bombing in 1978 (Fraser Government). The real perpetrators have never been found. Evidence that Australian security forces may have been responsible [in a false flag attack] led to the New South Wales parliament unanimously calling for an inquiry in 1991[1] and 1995.[2] The Government of Australia vetoed any inquiry. You can read more at http://en.wikipedia.org/wiki/Sydney_Hilton_bombing or here in an pdf file at http://www.reasoninrevolt.net.au/pdf/a000803.pdf with an interview of Anderson published in July 1991 that contains some very interesting comments on Asio and Special Branch activities in NSW leading up to this time.

Tony Backhouse on Australian Greens policy on Libya and Syria 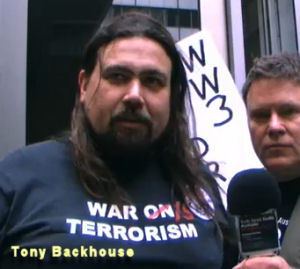 Tony was also marching. Interviewed by Truth News, he said that he had originally joined the Greens because of their stance on Iraq and policy of peace and non-violence, which is a platform of the NSW branch constitution, but he has just resigned from them over their support for UN Nato intervention in Syria. He stated, "I see this as akin to starting World War Three in Syria. I find it totally hypocritical and that's why I've left."

Tony said that, to him, it seems this position was taken initially by Bob Brown and then by Christine Milne (NSW) and Adam Bandt (in Victoria) and that perhaps the Federal Greens are falling into line with the European Greens. It was what had been going on in Aleppo that got him to make his mind up. He added that he nearly left the Greens over their position on Libya especially after Gaddafi's house was bombed and his granddaughter and other members of Gaddafi's family were killed. He noticed in the week of this Australians for Syria protest in Sydney that Leon Panetta [23rd and current United States Secretary of Defense] had actually threatened Assad's family: "And I thought, this is just ridiculous. I can't support this. I mean, my party is supporting a military intervention basically in Syria against their own constitution!"

Commentary on Democracy, Refugees and the Australian Greens - Please contribute if you can

The beginning of this article was taken from Truth News and we left out these words, [1] "elected democratic." Whilst we support non-intervention in Syria and basically support the current government, we disagree that the Bashar Asaad Government was elected democratically, since there was no opposition. Maybe we are wrong. Please educate us. You can read more about the Syrian government here. Nonetheless we agree that Bashar seems to be a very popular president and Syria did recently hold a very well supported referendum in which Syrians voted yes for to have multiparty government recently, to remove the constitutional definition of the B'aath Party as the ruling party of Syria, and to limit the time a person could remain president to 14 years.

Bashar Asaad himself seems to be pretty enlightened in a terrible region where colonial intervention has from the 19th century consistently preferred dictators and continuously reduced the self-organising ability of peoples. Bashar Asaad's father was a more severe dictator but, still, his people were provided for, in an area where there are far worse, far more brutal dictatorships. To illustrate the unbalanced basis of foreign intervention encouraging civil war in Syria, the Western powers currently include Saudi Arabia as their ally against the Syrian Government. This is not just ironic, but it is shocking, because the Saudi Government is incontestably depraved, yet able to get away literally with murder, mutilation, suppression of subjects and shocking, institutionalised, bizarre ill-treatment and disenfranchisement - enslavement really - of women. It is truly unacceptable that the United States and NATO hob-nob with this monarchy. There has to be a better and more globally cooperative way to power down with oil than this.

With regard to the Syrian Government, a Syrian-based Catholic nun recently said,

I am not Syrian, but I have been living in Syria for today almost 20 years. Syria was under a kind of totalitarian regime but not in only a way a repressive way but it was that all the decision would be taken by few persons. But there was security, there was food, education and people were living - of course not in ... kind that they would say their thinking in a loud voice.

Now, this totalitarianism is not good, and it's obsolete, but if the armed insurrection is implementing another totalitarianism which is maybe worse because there is blood, they can behead you, they can cut your - in last week in our village they cut the fingers of a so-called 'collaborator', who is not ev[en] from the village. Then they behead him, they cut him in piece and they left him in the street, where even children would see it.

So this kinds of acts of atrocities cannot help people to really believe that what is happening is a strive for freedom.

The majority of the Syrian population, I say, is taken as hostage, and sometimes as a tool, as [?enemy] by these armed, insurrection armed...armed insurrection people. They come and they take place in the civilian areas.

Australians, particularly Greens and Refugee Action supporters, logically should be speaking out in support of Syria which has taken in and managed to deal fairly with an extraordinary number of refugees and asylum seekers from this tumultuous region where, bizarrely, the Greens have been supporting NATO backing for civil war.

According to the 2012 UNHCR country operations profile on the Syrian Arab Republic,

UNHCR, with the support of the international community and in active partnership with the Syrian authorities, was able to maintain the protection space granted to refugees and asylum-seekers. With the assistance of the Syrian Arab Red Crescent, it has continued to provide them with essential services and assistance. Source: http://www.unhcr.org/pages/49e486a76.html

If nothing else, the counter-intuitive stance on Syria of the Greens is yet another indication that the people leading the Greens these days are career politicians with ideas and principles a very long way from the original participants and founders of Green Party's in Australia. As to where Bob Brown stands or ever stood... some of us do wonder. For those among us who care about our country and realise that overpopulation will quickly deprive us of ecological conditions and human rights, it is baffling that the Greens, who have so let us down in matters of ecology and population policy, do not stand up for Syria and its generosity to refugees.