The political left-of-center is losing the war; learn from Scandinavian states "We are losing the war. And by we, I mean the politically left-of-centre; I mean the Labor Party and other social democratic parties around the world, I mean the trade unions, and I mean the environmental movement. We sometimes win battles, but overall we are not winning. I repeat, we are losing the war. We sometimes win elections, but usually on the terms of our opposition. We are in office, but not in power. And at all times we are fighting defensive, rearguard actions to protect the things we have achieved and built up—the social welfare safety net; industrial relations and workplace rights and protections; environmental protections and national parks; publicly owned assets; rules against the abuse of market power. Our opponents are emboldened and enjoy unprecedented media power." From a speech by Kelvin Thomson in the Australian Federal Parliament on Monday 24 February 2014 [1] 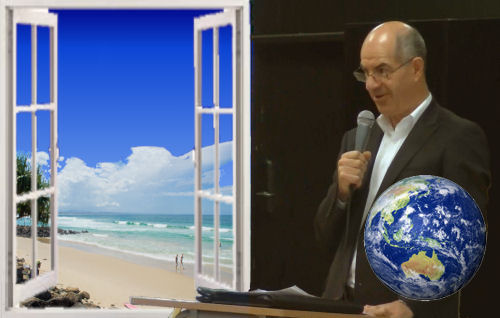 When I was young and first getting involved in politics, it felt like the left was winning and we would be able to usher in a golden age of civilized politics and equal opportunity. But it did not happen. A report by Oxfam, a month ago, found that the richest 85 people in the world own as much wealth as the bottom half of the world's population—some three and a half billion people—combined. Half the world's wealth is owned by just one per cent of the world's population. And the situation is getting worse. In nearly every country they surveyed, economic inequality has increased since 1980.

At the risk of oversimplification, capitalism was largely unfettered and successfully fighting off the workers and
their political representatives until the Great Depression of the 1930s, when they stuffed up big time and paid
for it in the form of the rise of the welfare state, government enterprises, workers' rights and protections, and
various restrictions on market excesses.

But in the last few decades the rise of multinational corporations, globalisation, free trade and the ideas of the free
movement of goods and people has enabled capitalism to progressively break free from national governments.
We now see corporations that are too big to fail. We now see companies, some as large as the governments they
talk to, demanding the unwinding of rules and regulations they do not like, and threatening to take their bat and
ball and go elsewhere if they do not get their way. Environmental protections, workplace protections, foreign
ownership restrictions—pretty much anything governments might want to do in the public interest—are under
attack. Large corporations are expressly demanding in so-called trade agreements that they have the right to sue
any government that takes action which damages their financial bottom line, the so-called Investor State Dispute
Settlement mechanism.

Fight back by learning from Norway's successful model

So how does the left fight back? How do trade unions fight back? How do environment groups fight back? We
need to learn from successful models. We need to learn from Norway, for example. When it comes to long-term
policy vision, Norway's Sovereign Wealth Fund, currently worth $900 billion, is what we should have done years
ago. Set up in 1990, the fund owns around one per cent of the world's stocks, as well as bonds and real estate
from London to Boston, making the Nordic nation an exception when others are struggling under a mountain
of debt. The fund, equivalent to 183 per cent of 2013 Gross Domestic Product, is expected to peak at 220 per
cent around 2030. As the chief economist at DNB Markets points out, 'The fund is a success in the sense that
parliament has managed to put aside money for the future,' which is something Australia should have done but
squandered the opportunity.

The comparison between Norway's management of their resources boom and Australia's management of ours
could not be more different. Norway has maintained a much larger manufacturing sector, currently just under 30
per cent, per working age of population, than Australia. Norway has an employment to working-age population
ratio that is five percentage points higher than Australia's and an unemployment rate of 3.3 per cent, compared
to ours of six per cent. Between 1980 and 2010 the cumulative current-account surplus for Norway was 200 per
cent of GDP, while for Australia the outcome was a cumulative current account deficit of 127 per cent of GDP.
Significantly, Norway has a population growth rate one-third of Australia's and little migration. What it has
instead is an aggressive industry policy to maximise pull-over effects to manufacturing from resource expansion.
This was done by local content targets during resource expansion and operation; and subsidies, investment
support and training to ensure manufacturing could meet local content targets at minimum cost to the resource
sector.

The sovereign wealth funds' investments offshore have minimised the appreciation of the Norwegian currency, in
contrast with Australia, where a high Australian dollar has put pressure on the competitiveness of manufacturing,
which in 2004 contributed 12.5 per cent to our economic output, but today just seven per cent.

There is absolutely no doubt that Australia has contracted 'Dutch disease'. Perhaps we should call ours
'Ozteoporosis'. Mining has grown but manufacturing has shrunk. We had a currency surging on the back of the
vast capital inflows required for new mine construction and expansion, as Ian Verrender recently pointed out in
an article on how we squandered the resources boom. In support of sovereign wealth funds, Ian Verrender said:
How could such a fund have helped us? By investing offshore, it could have helped stabilise the currency, partially
offsetting the dollar-boosting effect of the resources boom, thereby easing pressure on our manufacturing and
services industries.

We also need to learn from Sweden. As The Economist has reported:
Sweden has also donned the golden straitjacket of fiscal orthodoxy with its pledge to produce a fiscal surplus
over the economic cycle. Its public debt fell from 70% of GDP in 1993 to 37% in 2010, and its budget moved
from an 11% deficit to a surplus of 0.3% over the same period.

Sweden's public accounts, in contrast to the rest of Europe, have swung back into balance after the global financial
crisis, and Sweden remains one of the few countries in the OECD whose financial assets considerably exceed its
liabilities—to the tune of more than 20 per cent of GDP. Yet social expenditures remain high and the Swedish
welfare state remains strong. The Swedish state is still large—51 per cent of GDP last year—and spends much
more than Anglo-Saxon countries do on everything from early childhood education to job search and training.
More than 70 per cent of the children of the poorest fifth of Swedes are in state-financed childcare and education
schemes, compared with fewer than 30 per cent in America.

Wage disparities in Sweden are narrower than in Anglo-Saxon countries, thanks to centralised bargaining
between unions and employers that sets minimum wages in different sectors. More than 7 out of ten workers are
members of unions. Top CEO pay has not risen nearly as dramatically as in America.

Not surprisingly, Swedes' trust in government is over 60 per cent, amongst the highest in the Western world.
This is a vindication for a model based on relative equality and supportive welfare that can coexist alongside
a balanced budget, funded by high taxation in an economy that is performing well for all its citizens, not just
for vested interests.

Unlike Australia, the US, and other European countries, the Nordic countries have kept real control of their
borders. With one exception, they have kept their own currency. Norway has not even joined the European Union.
That is the sort of thing that gives you real independence and sovereignty, and control over your own destiny, as
opposed to entering into trade treaties that compromise and surrender the capacity of government to act in the
national interest and look after their own citizens.

And finally, and critically, they have not run migration programs that artificially inflate their population. The
Nordic countries have a combined population of 25 million, with expected combined growth by 2050 of only
three million to 28 million. Australia by comparison is 23 million but is expected to grow by over 60 per cent
to 36 or even 40 million by 2050.

For readers who want to help defend The People and their Environment, consider getting involved in Kelvin Thomson's Victoria First.