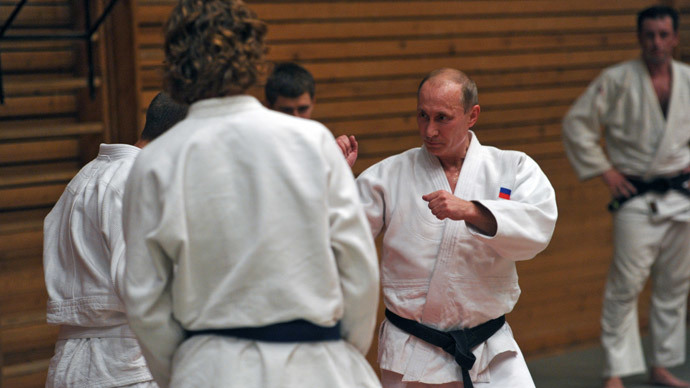 Abbott toned down his language a day later as he failed to answer journalists questions about shirtfronting Putin and whether he regretted his statement. He said he is "absolutely determined to have a very robust conversation with the Russian president."

But Odoevsky said that the Russian President is only planning to attend multilateral meetings, not separate ones.

"There has not been a request for bilateral meetings between Russian and Australian leaders, so we are not exactly sure where and when Prime Minister Abbott would like to shirtfront President Putin," he said.

Abbott still hopes to meet the Russian president during the G20 summit.

"But I certainly expect that while he's a guest of Australia, he will undertake to have a conversation with the Australian prime minister," Abbott said.

Jacqui Lambie, a senator from Australias Palmer United Party, said that Abbott and Leader of the Opposition Bill Shorten should "stop acting like hormone-affected school boys trying to out macho each other on the footie field – and start acting like mature leaders of a great country."

Earlier, Shorten had said that Putin should "show enough conscience" not to come to Australia.

Comic Jazz Twemlow criticized the remarks of the Australian PM, saying that "someone should tell Tony Abbott that gaffes arent like baby turtles."

"What was the reckless, childish taunt? To the sound of foreheads being slapped everywhere, on Monday the prime minister threatened to 'shirtfront' Vladimir Putin, leading to the inevitable mass purge of jokes that turned your timelines into a scrolling tapestry of male chests," he wrote in the Guardian article.

He said of Tony Abbott that "perhaps he's trying to impress the public.""In which case, if this is the image of the Australian public Abbott has, shame on us. How much more machismo does he think we can mentally ingest?" he asked.

Malaysia Airlines flight MH17 was shot down on its way from Amsterdam to Kuala Lumpur over eastern Ukraine on July 17, with 298 passengers on board.

A preliminary report into the disaster delivered by Dutch investigators on September 9 said that the MH17 crash was a result of structural damage caused by a large number of high-energy objects striking the Boeing from the outside.

Earlier a number of Western countries blamed Russia for the tragedy. Moscow, however, denies such allegations, saying there is a lack of new evidence presented in the report.