These films would constitute slapstick if their intentions to mislead were not so serious. They are meant to provide the United States with an excuse to drop bombs on Syria. This would be the same old disproven excuse that the US has tried to use already several times. It is amazing how the deep state just cannot come up with good script writers for anything. We have republished the below from https://sputniknews.com/middleeast/201809211068240639-syria-idlib-chemical-attack-fabrication/.

A video reportedly depicting a chemical attack fabrication in Syria's Idlib has been circulating Syrian media, the Syrian Arab News Agency reported. The agency said that the footage depicts "White Helmets" group staging an attack in order to accuse the government forces of chemical weapons use.

In the five-minute video posted by the agency, there are three versions of the same footage with slightly different "scenarios" and the arrangement of people. At the beginning of the video, the alleged "victims of a chemical attack" are lying on the ground, one man is being transferred on a stretcher to an ambulance, and a child is being hosed with water in a pickup van.

However, in the second and third versions of the video, the man no longer lies on a stretcher, but helps the others to hose the child with water.

The initially posted video was removed from YouTube for violation of terms of service shortly after it was published. It was also posted by other users, however.

Syrian Girl, the Australian activist, Youtuber, and social media powerhouse, tweeted on Thursday evening (EST) that her Facebook account has been blocked for her exposure of fraud during the Kurdistan referendum. She had 75,000 followers.

She gave Russia Insider (RI) an exclusive interview on Friday, explaining that Facebook acted without warning, (which is unusual - usually they give people a chance to correct whatever is upsetting the censors), and so far have not responded to emails.

As revealed by Julian Assange of Wikileaks, "Zuckerberg Colluded with Hillary Clinton Campaign":

Mark Zuckerberg's claims this week that Facebook was fair to Donald Trump during the 2016 election just took another serious blow.

The Facebook founder and CEO personally met with Hillary Clinton's campaign chairman John Podesta a year before the 2016 election, according to an email released by Wikileaks.

The news comes a day after Wikileaks' Julian Assange dropped a bomb onto the heads of Zuckerberg and Facebook COO Sheryl Sandberg, alleging they colluded with Hillary Clinton's 2016 election campaign.

Assange included one email from Sandberg to Podesta, Clinton's campaign manager, which is particularly damaging in which the Facebook executive pledged to help elect Clinton.

What can we do about it?

This outrageous attempt at thought control and censoring of political information by Zuckerberg, as well as Google, YouTube and Twitter, shows that in a true democracy, the news media upon which we all depend, must be taken out of the hands of the corporate owners and placed in the hands of the people.

Alternatively, rival newsmedia and social media that are run transparently, and with a charter to promote a free contest of ideas, should be established.

This could easily be done with public funds and with popular support within purportedly democratic countries like Australia, France, Germany and the UK. Should this not occur, then alternatives could be set up. One such alternative is the community-owned minds.com.

Another alternative is for sovereign countries like Russia and Iran, which are independent of United States' hegemony, set up their own alternatives to Google, YouTube, Facebook and Twitter. If they were also run transparently and with a charter to promote a free contest of ideas, they would very quickly draw away much of the current audiences of Google, YouTube, Facebook and Twitter. Such an initiative would surely cost those countries only a fraction of what they are currently obliged to spend on defence.

In fact, Russia has already set up Yandex an alternative to Google. Hopfeully, Yandex will soon be expanded to include more in English. Hopefully, also, other alternatives to Google, Facebook, and Twitter will soon be established.

Over time their need for defence expenditure would be greatly reduced as more and more people in Western countries are able to see through the lies of the corporate newsmedia. We could well see the end of war altogether.

John Pilger and Vanessa Beeley talk about the amazing growth in mass-media supported war propaganda in our times, including the grotesque fantasies manufactured about Russian intervention in US elections and the creation of a false cold war. Vanessa Beeley describes how, when she was in Aleppo, she was witness to the absolute fabrication of what was happening there. And now, the almost complete silence on what seems like American ethnic cleansing of Arabs in Raqqua - where the US is using depleted uranium, phosporos weapons and not providing any humanitarian corridors.

This article by Finian Cunningham was previously published on Sputnik News on 9/8/16. The republication of the full article here is awaiting permission from the editors. For more, read the Sputnik News article. 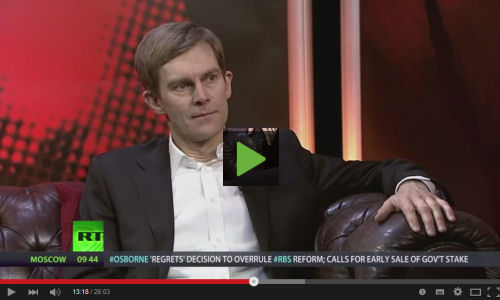