Once upon a time, there was a terrible tyrant who lived in an ancient castle with his family in the land of Sham. They lived in decadent luxury, feasting it was said on the young and succulent progeny of the land they ruled over. The people living below slaved to scratch a living and keep some food for themselves, suffering constant fear of the tyrant's soldiers and their terrible weapons. 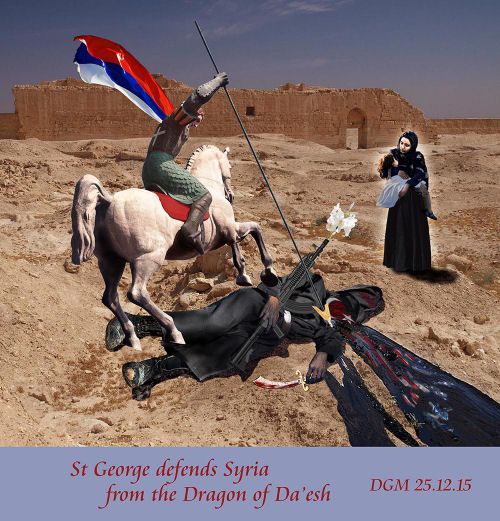 But one day the benevolent rulers of the neighbouring lands got together and agreed to help the poor peasants of the land of Sham fight for their rights, and even overthrow the wretched tyrant. The royal leaders of these lands, who followed a faith of tolerance and peace and love, opened their gold purses for the people of Sham, and bought them gleaming swords to protect themselves from the tyrant's raiders, as well as new tunics of black goat hair and supplies of grain and oil and incense for their homes. But they also gave them wonderful books full of sacred words and prayers that the people could recite, and shout out to curse the wicked tyrant and his dreadful men.

But the people of Sham still struggled, as the tyrant found new ways to steal their food and to terrorise them, so the kings got together again and hatched a plan. They would send some of their own honoured knights and courtiers to the land of Sham and lay siege to the castle, cutting the vital supplies of oil and of fuel and food to the tyrant and his family by kidnapping his men with their cargoes. The oil which came from the land of Sham was very valuable, so the benevolent kings of Krisis - which was the name of their lands, traded the special oil they had captured for tools and weapons for the peasants of Sham. Then the kings sent instructions to their knights and courtiers on how to strike at the castle when the tyrant had been so weakened by the siege that he could no longer resist the swords and curses of the knights of Krisis and the armies of 'Free Sham'...

This is an ancient story, and the ending we can only guess at now, because the land of Sham, which is now known as 'Syria', looks very different. In fact it is almost the mirror image of the old fable, as Syria's ruler is anything but an evil tyrant and lives in a small palace far from his family's home and lands. He doesn't need to protect himself from his people with walls and weapons, because they will protect him, while he keeps them safe from the evils of the world. And those evils are now all around, as the lands of Krisis are now occupied by kings and princes who know nothing of justice and humanity and occupy themselves in counting their gold and polishing their swords and guns, and plotting on how to attack their neighbours to steal their property and drive out their people....

- and thus begins the story of St George and the Dragon of Da'esh...