Apparently, the US Left has yet to figure out that Washington doesn’t try to overthrow neoliberals. If Syrian President Bashar al-Assad were a devotee of the Washington Consensus–as Counterpunch’s Eric Draitser seems to believe–the United States government wouldn’t have been calling since 2003 for Assad to step down. Nor would it be overseeing the Islamist guerilla war against his government; it would be protecting him.

There is a shibboleth in some circles that, as Eric Draitser put it in a recent Counterpunch article, the uprising in Syria “began as a response to the Syrian government’s neoliberal policies and brutality,” and that “the revolutionary content of the rebel side in Syria has been sidelined by a hodgepodge of Saudi and Qatari-financed jihadists.” This theory appears, as far as I can tell, to be based on argument by assertion, not evidence.

This article was first published October 22, 2016 at https://gowans.wordpress.com/2016/10/22/the-revolutionary-distemper-in-syria-that-wasnt/?blogsub=confirming#subscribe-blog. Reproduced here in part. Readers are strongly encouraged to go to the original publication site and read the whole article. 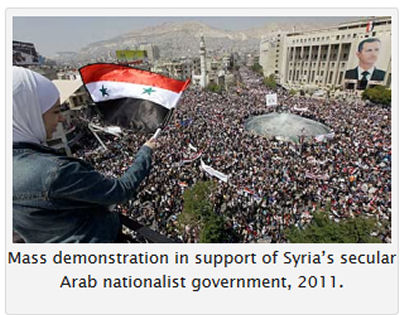 A review of press reports in the weeks immediately preceding and following the mid-March 2011 outbreak of riots in Daraa—usually recognized as the beginning of the uprising—offers no indication that Syria was in the grips of a revolutionary distemper, whether anti-neo-liberal or otherwise. On the contrary, reporters representing Time magazine and the New York Times referred to the government as having broad support, of critics conceding that Assad was popular, and of Syrians exhibiting little interest in protest. At the same time, they described the unrest as a series of riots involving hundreds, and not thousands or tens of thousands of people, guided by a largely Islamist agenda and exhibiting a violent character.

Time magazine reported that two jihadist groups that would later play lead roles in the insurgency, Jabhat al-Nusra and Ahrar al-Sham, were already in operation on the eve of the riots, while a mere three months earlier, leaders of the Muslim Brotherhood voiced “their hope for a civil revolt in Syria.” The Muslim Brothers, who had decades earlier declared a blood feud with Syria’s ruling Ba’athist Party, objecting violently to the party’s secularism, had been embroiled in a life and death struggle with secular Arab nationalists since the 1960s, and had engaged in street battles with Ba’athist partisans from the late 1940s. (In one such battle, Hafez al-Assad, the current president’s father, who himself would serve as president from 1970 to 2000, was knifed by a Muslim Brother adversary.) The Brotherhood’s leaders, beginning in 2007, met frequently with the US State Department and the US National Security Council, as well as with the US government-funded Middle East Partnership Initiative, which had taken on the overt role of funding overseas overthrow organizations—a task the CIA had previously done covertly.

Washington had conspired to purge Arab nationalist influence from Syria as early as the mid-1950s, when Kermit Roosevelt, who engineered the overthrow of Iran’s prime minister Mohammad Mossadegh for nationalizing his country’s oil industry, plotted with British intelligence to stir up the Muslim Brothers to overthrow a triumvirate of Arab nationalist and communist leaders in Damascus who Washington and London perceived as threatening Western economic interests in the Middle East.

Washington funnelled arms to Brotherhood mujahedeen in the 1980s to wage urban guerrilla warfare against Hafez al-Assad, who hardliners in Washington called an “Arab communist.” His son, Bashar, continued the Arab nationalists’ commitment to unity (of the Arab nation), independence, and (Arab) socialism. These goals guided the Syrian state—as they had done the Arab nationalist states of Libya under Muammar Gaddafi and Iraq under Saddam. All three states were targeted by Washington for the same reason: their Arab nationalist commitments clashed fundamentally with the US imperialist agenda of US global leadership.

Bashar al-Assad’s refusal to renounce Arab nationalist ideology dismayed Washington, which complained about his socialism, the third part of the Ba’athists’ holy trinity of values. Plans to oust Assad—based in part on his failure to embrace Washington’s neo-liberalism—were already in preparation in Washington by 2003, if not earlier. If Assad was championing neo-liberalism, as Draitser and others contend, it somehow escaped the notice of Washington and Wall Street, which complained about “socialist” Syria and the country’s decidedly anti-neoliberal economic policies.

A Death Feud Heats Up With US Assistance

In late January 2011, a page was created on Facebook called The Syrian Revolution 2011. It announced that a “Day of Rage” would be held on February 4 and 5. [1] The protests “fizzled,” reported Time. The Day of Rage amounted to a Day of Indifference. Moreover, the connection to Syria was tenuous. Most of the chants shouted by the few protesters who attended were about Libya, demanding that Muammar Gaddafi—whose government was under siege by Islamist insurrectionists—step down. Plans were set for new protests on March 4 and March 5, but they too garnered little support. [2]

Time’s correspondent Rania Abouzeid attributed the failure of the protest organizers to draw significant support to the fact that most Syrians were not opposed to their government.

This article, by Global Research News, includes a 52:45 minute embedded video, the live broadcast of which was censored by the United Nations. 1

This is not the first time this has happened when Bashar al-Jaafari is speaking. This occurred on June 7th earlier this year, and on numerous occasions throughout 2013. Reporters at Inner City Press reported that this is not accidental, but was ordered by Michele DuBach, Acting Deputy Director-News & Media Operations.

This comes in the context of other UN harassment of Syria. UN Secretary-General Ban Ki Moon has met with Ahmad Jarba, a leader of violent insurgent groups in Syria, but has refused to meet with Bashar Jaafari. Though Syria pays over $1 million to the UN each year, it is not being treated as an equal member state.

Watch the important, UN Press Conference about Syria, that someone obviously doesn't want you, or anyone else, to see:

#fnAbSy1" id="fnAbSy1">1. #txtAbSy1">↑ Examples of msm 'reporting' of the 2014 Syrian elections include: The Clever, 'Democratically Supported,' Bloodthirsty Tyrant (4/6/14) by Daniel dePetris of the Huffington Post, Syria Election: Experts Weigh In (2/6/14) – Voice of America, Landslide win for Assad in Syria's presidential elections (4/6/14) – Haaretz, Syrian election sends powerful signal of Assad’s control (3/6/14) by Liz Sly and Ahmed Ramadan of the Washington Post. (In comparison to the rest of the msm the report in Israel's Haaretz is surprisingly factual and balanced – Ed).

No-one who, elsewhere, chose to loudly dispute the legitimacy of that election could bring himself/herself to show the courage of his/her convictions by challenging the testimony of those observers at that press conference.

What other political leader in the world, particularly from nations hostile to Syria – the United States, France, the United Kingdom, Israel and Australia – can claim to have anywhere near as much popular support as Syrian President Bashar al-Assad?