Russian and Iranian English television broadcasters need to issue invitations to Teresa May, Boris Johnson, Niki Haley, Macron, Donald Trump et al, to defend their aggressive stances against Russia, Syria, and Iran,” says candobetter.net’s James Sinnamon. Unbelievable accusations against sovereign states are issuing from the governments of the United States, Australia, the UK and Europe. We are talking about the lines run by US-NATO on the Scripal spy poisonings and the so-called chemical weapons attack in Ghouta, which they have refused in the UN to investigate on the ground. Despite the total implausibility of these stories, the western corporate press, which includes ABC Australia and SBS, promote them uncritically. Yet the purpose of these stories is to provide excuses for war. The only beneficiary of the promotion of war is the military-industrial-media complex. The only thing working against this complex is the alternative media, which happens also to include English programs run by Iran’s Press TV Iran and Russia RT. Why are these programs so popular, especially RT? It is because they appeal to intellectuals because they are so much more complex and nuanced than the frustratingly illogical confabulations that pass for mainstream news in the Anglosphere. Press TV Iran’s The Debate is an especially robust forum. 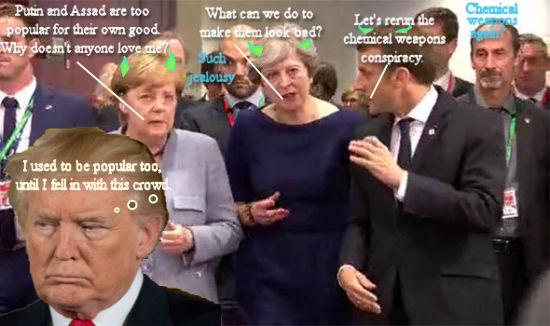 In a stunning abuse of power, one of the main theatres of initial promotion is the United Nations. The US ambassador, Niki Haley, continues to make outlandish claims in the bullying style of her predecessor, Samantha Power. It is like watching gangster molls with airs, who do not realise that they are being live-broadcast as they threaten plans to assassinate or otherwise remove presidents, invade countries, and bomb cities, all based on totally fabricated enemy ‘profiles’ of popular elected leaders as bad guys. In fact, if war-profits were not a consideration, you would be reminded of jealous children in a playground bullying their more popular colleagues. 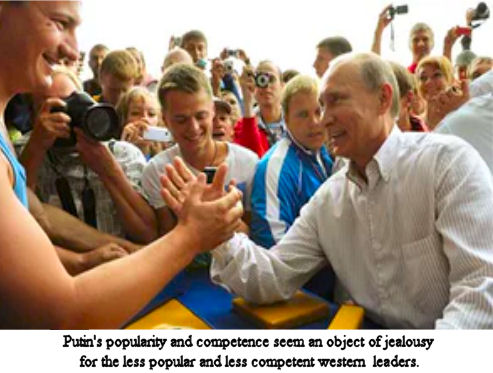 The major threats to modern civilisation: war, overpopulation, overconsumption, and energy resources scarcity. For a few years ago after the fall of the Soviet Union, war seemed a remote pastime, carried out between small tribal states, but then it began to metastacize from former Yugoslavia, to Afghanistan, to Iraq, then to Libya. Next was Syria and, at the same time, Ukraine. It is like watching the events leading up to the First World War. If you didn’t look at the regional oil and gas interests and rival hegemonies for countries that would afford access to them, then the whole thing seemed inexplicable. Even so, many people whose lives and lifestyles are not yet threatened, just cannot believe that people who have power would do such harm, apparently just out of ego and a desire for even more money. 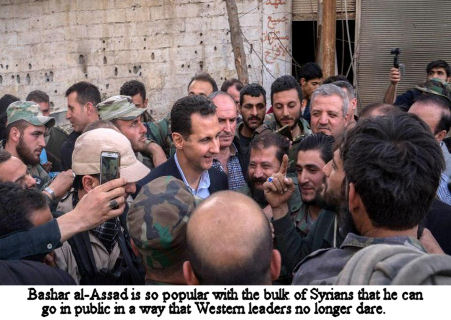 “I think that Russia, Iran and other nations, who are defending countries like Syria from military aggression, as a matter of urgency, could use their newsmedia - Russia's RT and Sputnik and Iran's PressTV even more effectively.
Perhaps those who conduct debates and interviews on Press TV Iran - Marcia Hashemi and Waqar Rizvi - and Russia's Oksana Boyko, Afshin Rattansi, [1] Sophie Shevardnadze and others - could, prominently and repeatedly, issue standing invitations to the likes of Theresa May, Boris Johnson and Nikki Haley et al., or their delegated spokespersons, to put their views on their programs and have those views discussed and debated.
Surely, if Theresa May et al. are so confident that they are speaking the truth, they would jump at the opportunity to show, to the audiences of RT and PressTV, how the views presented by those stations are wrong?

Of course, I don't expect that Theresa May et al. will acccept. If they don't RT and PressTV should include their names in lists, displayed prominently on their sites, of all Western political leaders who have declined to appear on RT and PressTV.

Given that hundreds of thousands have already been killed by military aggression, just since the Gulf War of 1991, and that the stakes for humanity are so high if this pattern is not stopped, I see know of no reason for the managers of RT and PressTV to pull any punches from now on.”

Sinnamon adds that, Afshin Rattansi, of Going Underground, leads the way to some extent because he is always issuing invitations to his detractors to appear on "Going Underground". If those who declined to be interviewed by Mr Rattansi were prominently listed, his impact would be even greater.