"Assange's case is a mirror which reveals the hypocrisy of the US and British claim to defend press freedom. [Because he revealed their war-crimes ...] the US government has, for more than a decade, filed unwarranted charges of sexual harassment, espionage, and computer-misuse against Assange [...] continuously suppressed Assange through secret surveillance, global pursuit behind the scene, deals, and other means. Britain has spared no effort in cooperating [...]"

Day four of Julian Assange’s extradition hearing saw lawyers discussing whether international law supersedes English law and a dramatic rejection by the judge of a simple request for Assange to be allowed to sit with his lawyers. [This article first published at https://www.rt.com/uk/481823-assange-judge-denies-bench-lawyers/ on 27 February 2020 at 8pm.]. 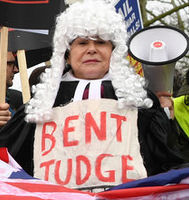 Snowy and wet weather didn’t deter the WikiLeaks founder’s supporters who gathered outside the Woolwich Crown Court and could again be heard inside the courtroom itself.

It was expected that the day would begin with Judge Vanessa Baraitser considering an application by the defense for Assange to sit on the benches with his lawyers, rather than in the glass-fronted dock where he has been so far, flanked by security guards, and unable to communicate with his team or hear proceedings properly.

Instead, however, the court offered Assange headphones to help him hear. He took the headset and Edward Fitzgerald QC for the defense said they would “give it a try” but he would need to be “glued to the mic” to ensure Assange could hear him and it may not be a proper solution.

It was not the last that was heard of the issue, which blew up dramatically later in the day.

Lewis argued that Fitzgerald was trying to introduce an exception through the “backdoor” and subverting the intention of parliament. He also argued that “political offenses” would need to mean Assange explicitly aimed to overthrow the US government or incite a change in policy — and said it was not clear that this was the whistleblower’s goal when he leaked information.

Lewis also reiterated his argument from Monday’s hearing that Assange was not being prosecuted for leaking information to the media, but for putting “lives at risk.” The prosecution has not, however, been able to prove that any lives were actually lost due to WikiLeaks’ actions — and the defense has, over the past three days, made a thorough case that Assange went to great lengths to redact documents, even warning the US government directly when other actors were about to dump unredacted versions online.

Fitzgerald rose for the defense just before midday. Lewis, he said, was going “too far” to suggest that the bilateral treaty between the US and UK had no legal significance — particularly since the treaty itself is the basis for the US’s extradition request. The defense accepted that the extradition treaty is not domestic law, but said the European Convention on Human rights is. At this point, Judge Baraitser asked Fitzgerald if he was just arguing “in circles.”

He said the court would be in a “pretty strange Alice in Wonderland world” if the treaty that gave rise to the extradition request supposedly had nothing to do with the legality of it.

Asked by the judge why he believes Assange was seeking a change in US government policy rather than simply exposing government wrongdoing, Fitzgerald asked “what other goal” could there have been, other than a change in policy? He said WikiLeaks’ actions were explicitly designed to change White House policy in places like Iraq and Afghanistan.

After a long lunch break, Mark Summers QC rose for the defense and told the court that the headset Assange had been given was not a solution to the problem of him being unable to hear and communicate with his team. This sparked a heated back and forth between Summers and Judge Baraitser.

Summers argued that the glass dock in which Assange was sitting presented numerous logistical issues and cited a report which concluded that such enclosures interfere with the right to a fair trial. He said the presence of mics and US personnel in the courtroom also made it impossible to communicate privately.

Judge Baraitser said she was willing to offer frequent breaks for Assange to confer with his team, but Summers did not accept this as a solution, saying it was “not practical” to stop proceedings “every three minutes” and that it was normal practice around the world — and in the UK — for a prisoner to be allowed sit and confer with lawyers.

Hostile to the defense’s concerns, the judge accused Summers of exaggerating and said that if a three-week hearing planned for May-June needed to become a six-week hearing, “so be it.”

The drama prompted Assange himself to rise from his seat to complain further. Judge Baraitser warned him to sit back down and speak through his lawyers. “I can’t,” he said. She told him to put his hand up if he wanted to attract the attention of his team, but Summers complained that since Assange was behind him, he couldn’t see when he had his hand up.

Even when reminded of Assange’s “particular vulnerability” and mental health issues, Baraitser did not back down, and ultimately refused the request for him to leave the dock. Somewhat surprisingly, the US prosecution maintained a “neutral” approach and did not object to the prospect of Assange sitting with his lawyers — but it made no difference.

Following some brief discussion about upcoming hearing dates, the court adjourned just before 3pm. It is now expected to resume for a case management hearing on April 7.

The real 'matrix'. Barrett Brown, publisher and journalist talks to Chris Hedges about the US government’s war on Wikileaks, Assange and other outlets exposing the inner workings of power.