The Syrian Kurds have asked Syria to help them because Turkey is threatening them. President Erdogan treats them as an extension of the Kurds in Turkey who want independence from Turkey. During the main part of the war in Syria (which seems to be tailing off now) the Kurds fought the Takfiri rebels. The United States, which supplied a lot of the so-called rebels including ISIS (indirectly at least) at times appeared to support Kurdish independence, using them as a lever against the Syrian Government. The Kurds had been offered control of their own department by the Syrian Government, but not actual independent state status. The US rewarded a Kurdish independence movement against Syria, although it is not clear that all Kurds in Syria really wanted this. The region also contains substantial minorities of Arabs and others whom a separate Kurdish state might not have suited. Until Russia intervened in the war (at the invitation of the Syrian Government) it looked like the United States backed terrorists were going to tear the country apart. The UN and NATO and its allies, including Australia, all supported this with a policy of removing President Assad and splitting Syria into many little states. The western public and corporate media provided propaganda to support this. Western readers were given no critical comparison with the prior destruction of Afghanistan, Iraq and Libya, states destroyed by the same kind of tactics. YouTube gave great comfort to these lies when it suddenly removed all of the Syrian Presidency's interviews, claiming some breach of advertising. [Suddenly some of them are back, as the wind is changing.] Since the insurgency began in 2011, Turkey provided a covert base for terrorists to attack Syria from. After Russia intervened with the invitation of Syria, the US, which was an illegal and unwelcome presence in Syria, tried to get Turkey to support it. As it was also promoting the idea of the Kurds having an independent state, Turkey's support could never be relied on. Turkey could always align itself with the Russians, although, in the end, it seemed to prefer to be independent and it has its own ambitions to dominate the region. By outing the murder of the journalist, Kashoggi, in the Saudi Embassy in Turkey, Turkey has made itself look a bit respectable, but it is not inconceivable that Erdogan is supporting the ruling elite in Saudi Arabia against the Crown Prince, for strategic purposes. No-one really knows. Whilst Turkey is not a Wahabist state, Erdogan is a leader in the Muslim Brotherhood, which wants to establish a new Muslim caliphate in the Middle East and much of Europe. Syria is a multi-religion state which includes many Christians and it does not support a Muslim caliphate. This editorial is by Sheila Newman and James Sinnamon, candobetter editors. We have republished the following report on the state of the war in Syria from RT.

Get short URL
FILE PHOTO: A Syrian army soldier stands next to a Syrian flag in Umm al-Mayazen, in the countryside near Deraa. ©Reuters / Omar Sanadiki

Damascus says it has deployed troops to the city of Manbij, the focal point of a tense standoff between Kurds and Turkey, as the government continues attempts to reassert control over the strategic border area in Syria’s north.

The Kurdish YPG militia on Friday called on Damascus to secure Manbij, located close to the border with Turkey. Ankara earlier said it plans to conduct an “anti-terrorist operation” around the city, with the YPG being the target.

In response, Damascus said its troops were already in the north and raised the flag in the “area of Manbij.” In a statement from the general staff broadcast by the Syrian media, the top brass said their army was determined to “crush terrorism and defeat all invaders and occupiers” as well as to provide security for all Syrian citizens.

Just how far-reaching the Syrian deployment is and if it’s taking place at all is yet to be confirmed by other sources, as is the Syrian Army troops’ arrival in the city proper.

Skeptical over the statement from Damascus, Turkey’s President Recep Tayyip Erdogan called the “flag-raising” a “psychological action.” He, however, acknowledged that there would be no need for the Turkish Army op in Manbij if the Kurds pull out of the city. 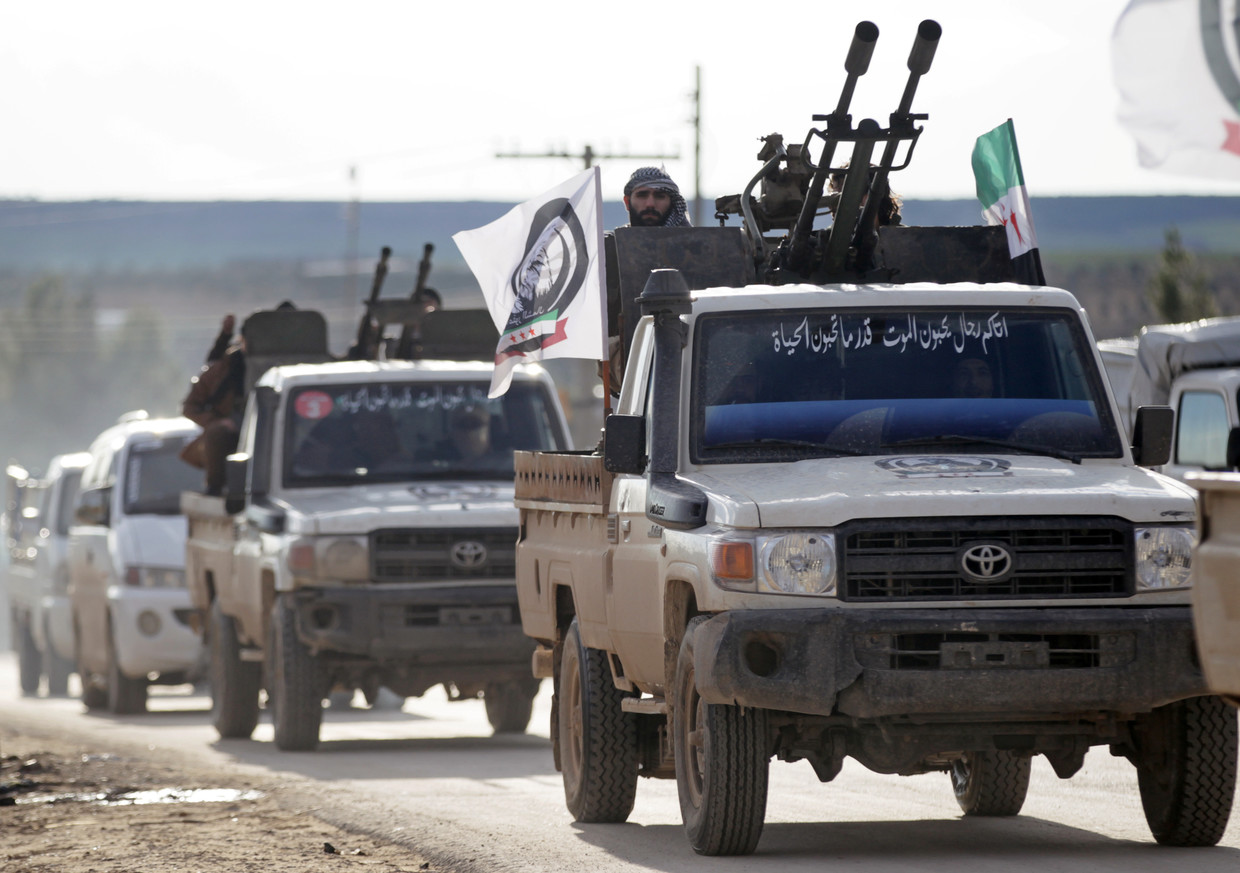 A Turkish-backed Syrian rebel rides on a truck with a mounted weapon at Manbij countryside, Syria December 28, 2018. © REUTERS/Khalil Ashawi

Meanwhile, Turkey-backed militants opposed to both the government and the Kurds said they were moving fighters towards Manbij and were prepared to start an operation there, if necessary.

Damascus is trying to assert full control over Syrian territory, a goal that remains elusive despite significant progress over the year. Among the contested zones are the province of Idlib, some Kurdish-controlled areas and a region on the border with Jordan, where a US military outpost is located.

The Kurds and the central government have remained mostly neutral towards each other over the years of the conflict and occasionally allied against jihadist groups. The Manbij maneuver does not make them immediate allies, but with Kurds de facto asking protection from the Syrian government, Damascus now seems in a stronger position to negotiate the degree of autonomy the Kurds would have after the political transition in the country. They currently control large swaths of territory east of Euphrates River, which is rich in oil, and crude revenues would be crucial for Syria’s post-war reconstruction.

Also on rt.com
Arab states are making nice with Assad’s Syria. Will the West follow suit?

Manbij became the focus of tense war of words earlier this month, after Erdogan said he was prepared to order a new “anti-terrorist operation” targeting the Kurds. He said the move was necessary because the US failed to make the YPG remove their fighters from the area, despite promises to do so.

The US, a key ally of the Kurds for the past several years, has meanwhile decided to withdraw its troops from Kurd-controlled areas in Syria, including Manbij. The withdrawal promises to be a game-changer for Kurds, who relied on American backing for protection against Turkey, but it is also yet to happen.

Ankara has amassed a fighting force near its southern border over the past few weeks but stopped short of launching the promised offensive. Turkey sees all Kurdish militias as an extension of its domestic Kurdish insurgency and attacked them repeatedly in both Syria and Iraq.

The situation is to be discussed on Saturday by top Turkish and Russian officials at a meeting in Moscow. Russia, a backer of Damascus in its fight against jihadist groups, said the deployment in Manbij may be a good sign that stabilization of Syria is progressing. But a spokesman for the Kremlin indicated that the outcome would depend on how the talks in Moscow unfold.