Monica Majioni of RAI Italia TV interviews Syrian President Bashar Assad. In the face of a politicized media and deluded self-censorship that undermine the remaining credibility of Italian public TV, it was the Syrian government that broadcast on state TV the interview we present to you on video and in the transcript edited by the Syrian State Press Agency SANA.

In March 2019 two law firms filed cases at the ICC against Syria’s President Bashar Al Assad and unnamed members of the Syrian government. Toby Cadman of Guernica Chambers and Rodney Dixon of Temple Garden Chambers were the protagonists in this latest attempt to criminalise the Syrian President and government.

The Syrian Kurds have asked Syria to help them because Turkey is threatening them. President Erdogan treats them as an extension of the Kurds in Turkey who want independence from Turkey. During the main part of the war in Syria (which seems to be tailing off now) the Kurds fought the Takfiri rebels.

PressTV presenter discusses with his two guests how Syria has, after more than 7 years, triumphed over tens of thousands of terrorist invasders, who were armed and paid for by the United Sytated, IIsrael, Saudi Arabia and their allies.

Russian President Vladimir Putin met his Syrian counterpart Bashar al-Assad in Sochi on 21st November 2017. The last time Assad visited Russia was at the beginning of the Russian campaign in Syria in 2015. According to the Syrian president, in two years of the Russian campaign the successes achieved have been evident and many residents of the country were able to return to their homes.

President Assad and President Putin met on 21st of November to celebrate the defeat of Daesh in Syria, but we hear little of this in the western media, which is distracting people with Hollywood scandals.

There had been a general public opinion poll conducted by independent sociologists and political scientists from all around the world in war-torn Syria. The citizens of the state shared their views on the main events and situation now taking place in the country, their attitude towards other countries acting actively on the fate of the country and also called the main problems of the state.

I have transcribed the text from an abbreviated version of President Bashar al-Assad's interview in the embedded video, which was released on 13 April 2017.

"We deny completely the use of any chemical or toxic material in Khan Sheikhoun town today and the army has not used nor will use in any place or time, neither in past or in future," the Syrian army has said in a statement. The Syrian Air Force has destroyed a warehouse in Idlib province where chemical weapons were being produced and stockpiled before being shipped to Iraq, Russia’s Defense Ministry spokesman said.

Disappointing to see that Trump's troops are in Syria without permission. Today, 11 March 2017, in a Chinese publication interview (conducted in English), Syrian president, Bashar al-Assad described the US incursion into Northern Syria from Raqqa as 'raids' which he did not think would succeed against ISIS because they are not coordinated with the Syrian government and army.

On February 8, 2017, Syrian President Bashar al-Assad and his wife, Asma al-Assad (the one with the pony-tail) met with women and children who were held in captivity by Islamist militants for more than three years.

For those rare individuals who like their news direct from the source instead of twisted by the biased mainstream media, this interview with Assad covers a new range of questions and answers. Assad denies that his family has any ownership of the presidency. He gives a clear account of how he came to be a presidential candidate.

As much of Washington prepared for the inauguration of President Donald Trump, I spent last week on a fact-finding mission in Syria and Lebanon to see and hear directly from the Syrian people. Their lives have been consumed by a horrific war that has killed hundreds of thousands of Syrians and forced millions to flee their homeland in search of peace.

Syria is on the cusp of peace, but the propaganda war is still raging in the west. What about Bashar al-Assad's reputation in the west as a torturer? Does the evidence of this mean that the Syrian state has no right to defend Syria?

In this article a Syrian gives an opinion on torture in the Syrian state, in the region, and on behalf of the United States. The article responds to western propaganda used to justify US-NATO policies to remove Bashar al-Assad in a foreign 'regime-change'. Note that Bashar al-Assad was legally, popularly and resoundingly elected, so the Syrian Government should not be referred to as a 'regime'.

During an interview on 19 October 2016 with Swiss TV SRF 1 TV Live, President Bashar al-Assad stressed that protecting civilians in Aleppo necessitates getting rid of the terrorists. He said, “Of course, it’s our mission according to the constitution and the law. We have to protect the people, and we have to get rid of those terrorists in Aleppo.

Mimi al-Haram (aka 'Syrian Girl')'s shows a very thorough understanding of the conflicts within and from outside Syria and an ability to transmit the complexity in ways that make it possible for most of us to quickly grasp the issues.

Syrian President Bashar Assad says that US airstrikes which killed 62 Syrian government troops were “intentional” and they lasted for an hour. He added that the US “does not have the will” to join Russia in fighting terrorists in Syria. Article contains video interview of Bashar al-Assad on this matter. 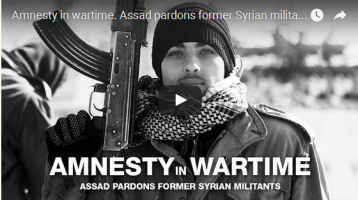 Video documentary of army training and interviews with former enemies of the Syrian Army who have sought amnesty and now train to fight for Syria: "On several occasions since 2011, Syria’s President Bashar al-Assad has offered amnesty to anti-government militants who lay down their arms.

Here is a brief update on the activities of the US Peace Council delegation in Syria. We went to Ma'alula today [29 July 2016] and tomorrow most of us will fly home. I could spend many words and hours debunking every lie you have been told about Syria and Syrians in the last 5 years, a Sisyphean task in today’s environment.

The Reverend Andrew Ashdown has been visiting Syria since 2005 – several visits before the conflict, and three in the last two years. On this occasion he was a member of a diverse peace delegation which was allowed freedom of movement by the Syrian Government. Ashdown writes: During the visit we met with hundreds of people - local and national political leaders, both government and internal opposition figures; with local and national Muslim and Christian leaders and members of reconciliation committees; with internally displaced refugees; and with numerous people on the streets of towns and cities – Sunni, Shi’a, Christian, Alawite; most of whom feel their voices are unheard, ignored and misrepresented.

"There always has to be a 'madman' in the Middle East," explains Jeremy Salt, when asked why we constantly hear that 'Bashar al-Assad has to go'? Of course Bashar al-Assad is not really mad. Jeremy explains how the west, in its long exploitation of the Middle East, has invented crises that it then pretends to help with, and these tend to feature a 'madman' whom the people have to be saved from. In reaction Middle Eastern governments tend to be defensive and authoritarian, in order to survive constant foreign interference. Even if Bashar went, the Syrian state would remain the same. Salt gives a fluent history of how the west has used the Middle East, and how western politicians expected to knock Syria over easily, but underestimated it. All they have done is weaken it and assorted armed and dangerous groups including ISIS have risen up through the cracks they have created. But many Syrians really like Bashar al-Assad and think he is their best chance for reform. (See the third part in this series, "Has the Syrian president killed more than ISIS and other questions," to hear about how al-Assad is actually legally elected and had brought in reforms prior to the current crisis.) Petty asks about beheading and the role of religion and Islam in today's crisis. Salt agrees that Islam has been taken over by conservatives and extremists, but precises that this is a political ideological take-over that has little to do with Islamic religious base.

Video inside:Syrian students and teachers of one of the country's biggest universities gathered in the centre of Homs, Wednesday, to thank Russia for its role in the Syrian conflict. You can hear them chanting Bashar al-Assad and they are carrying banners featuring Assad and Putin's faces. The Australian and US press mislead us all into endorsing a war that Syrians do not want. The latest is Tanya Plibersek's pathetic complaint that Australian should be included in the NATO war-party on Syria. " Tanya Plibersek: Australia deserves a seat at the table in Syria negotiations." As aufinm remarked in the discussion under the Guardian article, "'Deserve' is a very weird word to use. This is a war, not a bloody christmas party planning committee." Check out the comments under Plibersek's ignorant article. They are unusually perceptive and well-informed on Syria.

Suppose a respectable opinion poll found that Bashar al-Assad has more support than the Western-backed opposition. Would that not be major news? Here are results of surveys that tried to find out what Syrians actually want in terms of government, rather than what foreign forces wish to impose on them.

Bruce Petty is a highly regarded political satirist and cartoonist as well as an award-winning film maker. He went to Syria in 2009 (before the war) on a project to interview Syrian intellectuals and university students about their political views. Dr Jeremy Salt is a former journalist, turned academic and is the author of The Unmaking of the Middle East. A History of Western Disorder in Arab Lands, (University of California Press, 2008). Until recently, Dr Salt was based in the Department of Political Science and Public Administration, Bilkent University, Ankara, Turkey, where he ran courses in the history of the modern Middle East, in politics and in politics, propaganda and the media. The story behind this series: On 16 November 2015 a small group of concerned Australian citizens got together to talk about the problems of getting real information out to Australians and other US-NATO allies about war in Syria, in spite of mainstream press efforts to confuse the public. Bruce Petty and Jeremy Salt were part of that group. Inside is the transcript of the embedded video. (There are two other videos in this series: "Cartoonist Bruce Petty and Dr Jeremy Salt: Where news comes from: reporting on the Middle East." and "Does Bashar al-Assad really have to go? Cartoonist Bruce Petty talks to Dr Jeremy Salt")