The Brisbane Airport has released its 2009 Preliminary Draft Master Plan, and the public only has until the 30th March to comment on it. This plan proposes the construction of a new parallel runway and the continuation of 24 hour operations. 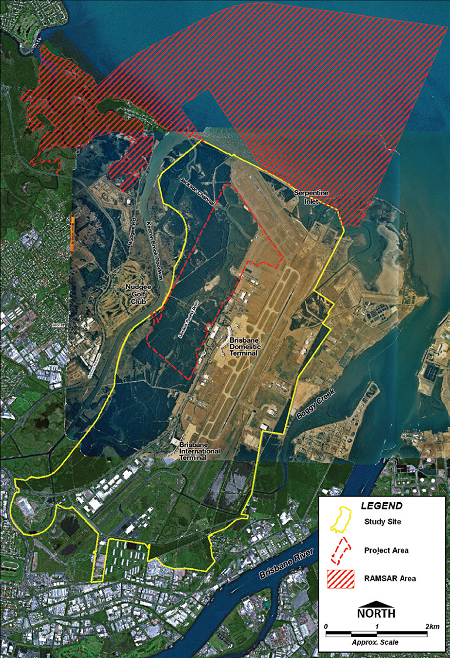 The new runway would cause multiple problems including increased noise pollution, learning problems for children, increased risk of plane crashes from bird strikes, which could result in an environmental disaster for the Moreton bay and Boondall Wetlands. Brisbane Airport had the highest number of bird strikes in 2008 and they are building the new runway on the edge of where all those birds are coming from.

It is important that people make submissions opposing this new parallel runway and calling for a night curfew. The Canberra Airport Master plan was rejected in November 2008, due to community concern, and they are now considering a curfew. Submissions may be made to info [AT] bacmajorprojects.com.au. (It is interesting that now Kevin Rudd has moved to Canberra the feds rejected their new parallel runway.)

The Greens are the only political party saying no to the proposed new runway. Prime Minister Kevin Rudd, fought the new parallel runway for over a decade and promised that if elected he would impose a night curfew, but has now walked away from this commitment.

Greens candidate for Clayfield, Andrew Jeremijenko is the only Clayfield candidate that opposes the new parallel runway. He is a doctor and a specialist in environmental medicine and states it would cause adverse impacts on human health and amenity.

The Greens will impose a night curfew now and require changes to minimise noise pollution and to protect the Boondall Wetlands, the internationally protected bird sanctuary.

What you can do: Urgently send to info [AT] bacmajorprojects.com.au a submission advising of your objection to the new runway by Monday 30 March.

Brisbane Airport has admitted that pelicans are shot to prevent crashes.

THE Federal Airports Corporation (FAC) was under attack by conservationists yesterday after officers shot several pelicans which had wandered close to the tarmac at Brisbane airport.

The pelicans were shot by FAC safety officers as part of "standard practice'' to keep native birdlife out of the flight-path of departing aircraft.

Airport workers, who witnessed the incident, said they were sickened to watch the safety officer fire on the flock of pelicans as they waded in water on the airfield.

At least two pelicans were killed and one other wounded in the exercise which the FAC described as the "last alternative'' in a bird harassment program.

FAC manager of airport services Cam Spencer said it was a choice between wildlife and the safety of hundreds of people.

Several methods of managing the bird problem were used, including shooting blanks and deterring nesting, before the final solution was employed, he said.

"The current season has seen large flocks of birds, particularly herons, roosting in the airport,'' he said.

"We are attempting to tackle this problem and have involved specialists from Griffith University to devise strategies to remove the danger.

"A major hazard to safety in airports throughout the world is the possibility that a bird will be ingested by an aircrafts engine, particularly during takeoff.''

The Queensland Wildlife Preservation Society said they were "appalled'' by the killings and recommended an investigation into alternative approaches.

Deputy president Ted Fensom said other airports employed tamer methods to deal with the problem, including the introduction of trained Peregrine falcons which were released sporadically to scare off wildlife.

"This seems to be an appalling approach to management, why they had to shoot them remains to be seen,'' he said.

Table 17 below is taken from the web and I have given the link which shows Brisbane had the highest total bird strike number last year at 90.