To burn-off or not to burn-off?

There's a pot-stirring poll in today's Australian - Is conservation policy to blame for the fires?
The truth is that logging is responsible for the fires. Logging or 'forestry management' historically, and probably actually, underpins the philosophy of the Department of Sustainability Victoria's approach to forests and is almost certainly responsible for increasing fire-risk in our forests and Victoria's climate change. 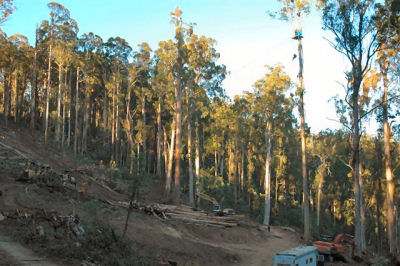 Here is what logging does to forests:

Every year, accidental understory fires damage a large percentage of Amazon forest. This is the phenomenon we have called 'cryptic deforestation' (Nepstad 1999). These escaped fires travel slowly (10-20 meters an hour) and only reach a few inches in height, but they can be quite destructive to understory vegetation and kill many larger trees. Once a forest has burned, increased leaf shedding, an abundance of branches and other coarse fuel enhance its fuel load, and an open canopy ensures the fuel will be dry enough to burn. Since settlement is typically a one-way process, the ignition source - humans - is there to stay, and successive burns tend to be more intense and destructive.

Cryptic deforestation due to forest fires and logging may affect as much forest area as deforestation in most years — and even more during periods of prolonged drought. For instance, during El Niño years, up to 25,000 km2 of Brazilian forests may be affected by fire."

We can change local climate by changing forests.

Think of how much cooler it is in a thick forest on a hot day, if that forest is dark and well watered.
A healthy forest is a microclimate that recycles its own water and creates rain.
The forests that burned were not healthy forests. They have been thinned for centuries by logging. Prior to that, the dry forests were largely created through aboriginal fire-stick farming.

We have been brainwashed by the logging industry to believe this is normal.

The same thing is now happening to the Amazon.

Think of all the money and water that the fires have so-far cost us.
That could have gone to hydrating them, nursing them back in to health.
We could recycle water through forests, plant in-between the trees - providing viable understory and denser trees.

Clean Ocean Foundation has been campaigning for just such a use for 'waste-water' for years.

It could pay off in terms of increased rainfall and pleasant climate nearby, quite quickly. As we rehabilitate and increase our forests, around sustainably built, fire-proof towns, climate has a chance of improving, Victoria-wide. We really don't have any other options.

God, we just throw money away on everything else and in Victoria we do send an enormous amount of water which would once have percolated slowly through the land, mostly through forests, out into the sea. Gunnamatta outfall, for instance, where 150 gigalitres of polluted water runs into the sea every year.

Loggers have normalised drying, dying forests to our cost

Note that this may seem more of a problem than it is because the forests have been managed by people who have normalised the idea of constantly thinning forests so that the public no longer question the idea that they catch fire more and more frequently.

Logging costs Victoria more than money; we can employ loggers to rehabilitate the forests and our climate

Yet there are loggers who know and love the forests, but have no other way of making a living. Let's provide jobs for the community rehabilitating the forests and our climate. It would be so much more interesting and positive than logging - which probably costs Victoria more money than it makes. 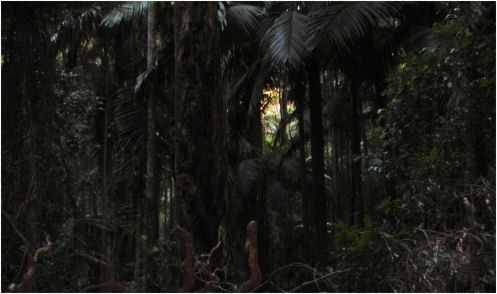 The key to potentiating a wetter forest must be
(a) in redensifying it; adding trees so that there is less light and less drying
(b) in the opposite order, growing a wet understory, and several layers of such
(c) reducing light and increasing moisture by increasing canopy, density and tree size, height and age

Dry forests will use up water only as long as it takes to get them on their feet; then they will conserve their own water and positively affect rainfall.

#10;<small>Look at the role of the trees in creating rainfall. More trees, more rain. The best investment of time and energy in this time of growing unemployment. Write to Kevin Rudd and Mr Brumby</small></p>&#10;<h4>Where might the water come from?</h4>&#10;<p>Here are some ideas:<br />&#10;- Recycle drinking water or other water through them prior to reuse - <a href=" https:="" />Gunnamatta Outfall - 150 GL a year.
- Wet the dry 'fuel' and use it as mulch.
- Maybe use chemical agents which retain moisture initially among the mulch (such as are sold for people who don't wish often to water their plants.
- Use wetting agents
- Close down some of the new intensive irrigation farms, such as feedlots and divert the water back to a good cause
- Use water from desal plants - if we must have them; let us use their water well instead of on new developments.

-Tax water speculators (buyers and sellers) an amount per dollar for forest rehab.
- Get volunteers to contribute money from their taxes to buy water for forest moistening.

Once you had established some wet understory, it wouldn't take too long for a lot of the evaporation to stop.

- Fast-growing wet-forest trees which could be helped along.
- Use a variety of techniques to intensify the humidity of the forest climate; maybe possible to artificially increase the canopy for a while, for instance, to retard evaporation.
- You could start planting a section at a time.
- It might be an idea to replant for wet forest (irrigated) on the edges of the forests next to towns (obviously you would then have to plant a buffer-zone to diminish evaporation. However you need a large, consolidated area to enhance the forest micro-climate

- Build up the earth around the forests, using bulldozers, to create giant swales feeding into the forests, stopping run-off and allowing percolation.
- Prolong the swales (Peter Andrews style) back as far as you can in the catchment area.
- Un-dam, undivert rivers and creeks which once fed the forests.

- Stop growing the population of water consumers and take some back from dumb industries like paper (short fibres) recycling. Most industrial recycling is a waste of energy. The most useful recycling you can do is of organic waste in your garden. (Yes, a garden is a very good thing for the environment.)

Those are just some ideas.

The Murrindindi fire blasted over the Black Range and some of the most "managed" forest in Victoria on it's way to the Acheron Valley and Marysville. Logging regeneration and pine plantations mostly. Then it slowed down once it hit the O'Shannesy/Armstrong catchment. Unfortunately looks like some old growth remnants from 1939 may have gone in the Deep Creek area.

The logging industry and their political mouthpieces don't care about the truth or facts, they are only concerned with establishing their self interest position in the public mind, off the back of tragedy, and of course blaming "greenies" and "conservation" as the villains.

It is a replay of what they did after the 1993 bushfires, and they kept it up for over 6 months.

Hopefully the Royal Commission will sort out the propaganda and lies from the truth, but no doubt the loggers will provide a barrage of submissions and run a PR campaign in their favour too.

The irresponsible and inflammatory attitude of the mainstream media

Miranda Divine has already jumped on the forest-bashing bandwagon, but has she even looked deeply into the matter?
Wilson Tuckey sounds like a wise old parent, doesn't he, giving us all the bad news about growing up. But are we such children as to believe him?

Twice today on Radio National the opportunists were at it - first Phil Cheney in the morning and on The World Today, the ABC Radio National gave David Packham oxygen.

Let the mainstream media know that their coverage of this rubbish is in bad taste and shows shocking ignorance of the issue. We must not allowing different environment sectors to be used as a political tools by the mainstream media, which, going by its interests in property development, population growth, housing and big-business, would rather get rid of the forests and the native wildlife and just have wall to wall houses and crops - and the hell with our climate.

Now go and answer that poll in the Australian.