Need 60 million have died to rid the world of Hitler? 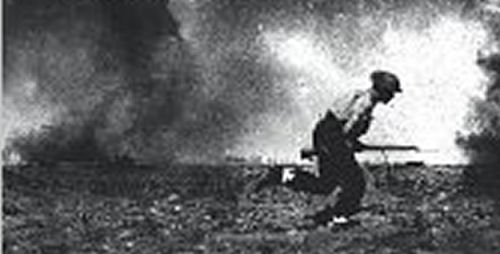 In fact, as with much other history of modern and earlier times, accepted conventional mainstream histories don't properly explain the Second World War, although a growing number of alternative historians have in recent years provided better and better explanations.

Unless lessons of that and other conflicts are properly understood, it is likely that a new global war, fought with weapons vastly more advanced and terrible than those used to kill 60 million from 1939 to 1945, may make that barbarity seem civilised.

More than anyone else I can bring to mind right now, Max Hastings has demolished any possible view that the Second World War was not a ghastly tragedy for most people affected by it.

I think, however, that All Hell Let Loose fails to adequately address one of the most vital questions that should concern anyone who takes the trouble to study this war:

That question is, once the war began, could the leaders of the anti-fascist alliance -- Britain, the US, the Soviet Union, etc. -- have won the war more rapidly and with less bloodshed and destruction? Was it necessary for all of 60 million to die to rid the world of the evil that caused the Second World War?

I could add a number of other examples not raised by Hastings.

Had the British and American leaders acted more decisively, Germany's war machine would have collapsed in 1943, if not earlier, but it seems that Western governments found two more bloody years of war and destruction preferable to the collapse of the Third Reich.

Could it be that an unstated war goal of Western governments was for stable capitalist rule to be maintained? Had the German Army collapsed in Western Europe, popular Communist-led partisans who triumphed in Yugoslavia would have also triumphed in Italy, Greece and possibly elsewhere.

As it was the de-facto co-operation given by the Western Allied military to the Wehrmacht in its suppression of partisans in Greece and Italy ensured the triumph of right-wing forces, including many former collaborators in the Western sphere of influence. Stalin also contributed to the triumph of right-wing forces, through, for example, his cynical betrayal in 1944 of triumphant Greek communist partisans, whom he ordered to lay down their weapons before the British,

Need Eastern front war have been so costly?

A more vexing question is how the terrible bloodshed on the Eastern Front, in which the vast majority of lives were lost, could possibly have been reduced.

Surely, it should have been possible for Stalin to have offered Germany peace in return for reparations and punishment for the leaders who had caused the war and those German soldiers who had committed the worst crimes against Soviet citizens?

If that had been done, say, after the German offensive against Moscow was stopped in 1941, and Germans, who surrendered, treated humanely, then surely fewer and fewer Germans would have seen reason to continue to fight for Hitler.

Instead, the brutal conduct of the war against all Germans, with no realistic prospect of peace with dignity offered to them, ensured that most fought ferociously until the very end, making the toll paid by the Soviet Union much higher than it need have been. The brutal treatment of Eastern Germany by its Soviet occupiers after 1945 would have helped confirm in the mind of many former German soldiers that they were right to fight to the end.

1. I don't necessarily include General Eisenhower in this. He started the war as a relatively junior officer (Lieutenant-Colonel, I recall) and was promoted to Supreme Commander of the Western Allied armed forces because of his demonstrated ability. It seems that 'mistakes' which served to prolong the war, were made on a number of occasions by officers junior to him, including, in Sicily, by Patton and Montgomery. He may have had, at the back of his mind, his experiences in the Second World War, when in January 1961, in his departing speech as US President, after JFK had been elected, he warned against the "military-industrial complex".

2. I haven't yet reached the part of the book which describes the ground war in Northern Europe from June 1944.

This comment has been moved to here, because I consider that it disrupts the discussion on this page - Ed (13/5/16)

Following the recent 71st anniversary of VE day, Russia Insider, which is otherwise informative, insightful and an indispensable alternative to the lying mainstream media, posted to YouTube an excerpt (embedded below) from an RT interview of 9 May 2011. That was the day after the 66th anniversary of VE (Victory in Europe) Day, 8 May 1945.

In this interview, Professor Geoffrey Roberts claimed that the Soviet Union could have, on its own, defeated Nazi Germany, without the help of its Western Allies.

Whilst Professor Roberts is right to remind people of the heroism and terrible sacrifice of the Soviet people, I can't share his certainty that the Soviet Union, alone, could have defeated Nazi Germny. In all probability, it seems to me that, without Great Britain defying Hitler after the fall of France in 1940, and without the ongoing fighting of Britain in the Balkans, [1] North Africa and the Atlantic Ocean, the subsequent entry of United States into the war and the aerial bombardment of Germany's industry, the Soviet Union would have almost certainly lost that war.

The reason I think that the Soviet Union could not have won without help from the Western allies, is that it seems that there must be a limit to how much sacrifice any country can endure. I doubt for the Soviet Union that that limit could have been much more than the 27 million and without help from America and the British Commonwealth and other allies, many more Soviets would have certainly died.

In fact, that terrible 27 million death toll is much higher than it need have been and was only made necessary by Stalin's criminal misleadership of the Soviet Union.

Had Stalin heeded the warnings from Britain, America, his own spies and German army deserters, that Germany was going to invade, many of the military defeats and much of the terrible loss of life which followed after 22 June could have been avoided. Had Stalin not destroyed much of the Red Army Officer corps in the great purges of 1937, Nazi Germany could well have defeated at a cost of well under the 400,000 lives lost by the United States in that war instead of 27 million.

27 million Soviets died in the Second World War thanks to Stalin's 'leadership'. How many more lost lives do you think the USSR could have sustained?﻿

[1] This is notwithstanding Churchill's crimes against the Greek resistance after October 1944.