Contents: #LostBroadbandOpportunity">Australia could have had universal fibre-optic broadband access before 2000, #AtMercyOfImportedManagers">Former Telstra owners at the mercy of imported US management team, #DemocracySubverted">Democracy subverted to by-pass public opposition to the sale, #Accountability">Holding to account those responsible for the wreckage, #FixingTheMess">How to fix up the mess?.

On behalf of the community group Citizens Against Selling Telstra I would like to commend your stance for the retention by the Australian Government of a majority stake in the National Broadband Network (NBN).

The spectacle of the the year-long acrimonious struggle over Telstra's participation in the NBN which ended on Tuesday is an object lesson in why a vital public service such as telecommunications should never have been handed across to the private sector.

Contrary to what Telstra CEO Sol Trujillo told the Australian public on the occasion of the launch of its 3G network in October 2006, Australia had been a leader and not a 'follower' in the field of telecommunications. At least that had been the case before the Hawke and Keating Labor Governments, with the support of the then Opposition, placed the millstone of deregulation and contrived competition around its neck. Telstra, or Telecom, as it was then known, had planned in the 1970's to have every Australian household connected through a fibre-optic cable to the Internet, then, in its infancy, before the turn of the century. 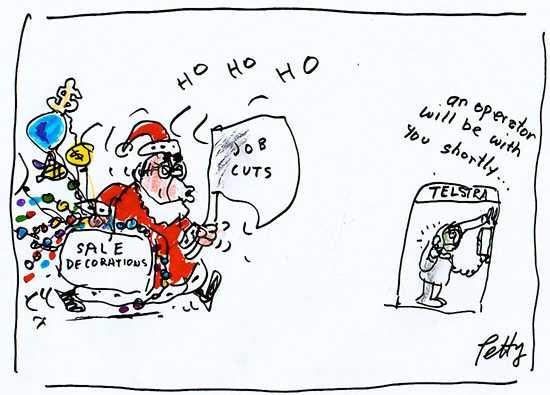 Originally published in the Age of 20 Dec 08

If Telecom had simply been allowed to get on with the job, the far-sighted dream of Telstra's engineers, scientists and managers of the 1970's would have long ago become the every-day reality for virtually every citizen of this country.

Now the Australian public must watch helplessly as the public utility they had all once owned and paid for many times over through bills and taxes, is managed by Americans with little demonstrated concern for its customers or its workforce, or even its shareholders. The new management attempts to gouge every last dollar from the old owners as profit and managerial salaries. Even then it does not guarantee to adequately service rural and remote communities.

Whilst the Australian Government has, to its credit, finally stood up to Telstra's bullying and excluded it from the NBN tendering process, it would not have even faced this problem if it had remained in Government hands. As the Labor party, to its shame, retrospectively endorsed the full privatisation of Telstra, turning its back on years of its own stated opposition to the sale, it must also accept much of the moral responsibility for what has happened.

Such conflicts which waste the time, money and resources of both the Government and Telstra were anticipated by our group and most other independent and informed commentators. In our group's submission to the Telstra Senate Inquiry back in September 2003 we stated:

If the abuse of monopoly power is to be mitigated to any significant extent, then a large bureaucracy to regulate Telstra will be required. Furthermore, the legislation to regulate Telstra would have to be constantly reviewed and amended to keep abreast of rapid changes in communications and information technology.

For its part, Telstra can be expected to use an army of lawyers to devise ways to evade the rules. This cost will ultimately be borne by its customers or its shareholders.

The experience of Telstra has confirmed that privatisation was never was anything more than a scam to allow institutional investors, banks, stockbrokers, directors, senior managers, favoured contractors, etc, to line their own pockets with the wealth created over decades by Telstra's workforce and the Australian public.

Nothing good has been achieved since privatisation that could not have easily been achieved by a technically competent management with the public interest at heart.

On the other hand, a great deal has been lost. Hundreds of pay phones have been ripped out; the aging network remains neglected; thousands of jobs have been eliminated or off-shored; wages and conditions of Telstra's workforce have been savagely reduced and collective bargaining rights have been denied to them; training opportunities have been removed. Examples include the closure of the apprenticeship schools back in the early 1990's, as well as, more recently, the closure of the linesmen's school. Career paths have been lost. There has been almost no recruitment of Australian IT staff.

Unsurprisingly, in every opinion poll on this question, Australians have overwhelmingly rejected privatisation. Even in September 2005 as the full privatisation legislation was being rammed through the Senate with obscene haste, opinion polls showed at least 70% opposition to privatisation.

A striking paradox of privatisation is that hardly any of it's proponents ever stood up and publicly argued the case for privatisation. Former Prime Minister John Howard, this country's supposed leading proponent of Telstra's privatisation, never once explained to the Australian public why he thought it was a good idea, as far as I am aware.

Mr Howard first insisted that he only intended to ever partially privatise Telstra and emphatically rejected any suggestion that this would lead to full privatisation. Then, after Telstra had been half privatised, John Howard chose his moment to forget the assurances he had previously given in order to turn the argument around 180 degrees. He then insisted that it was absurd to have a "half-pregnant" Telstra, but still avoided at every stage stating why privatisation was inherently a good idea. 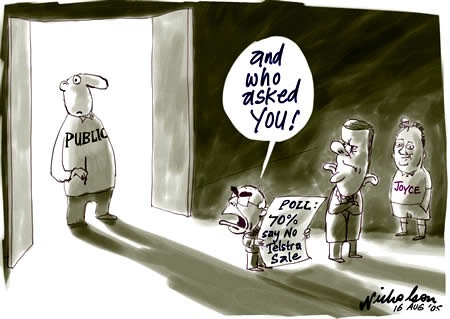 Original from The Australian of 16 Aug 05.

During the 2004 Federal election campaign, from which the Howard Government subsequently claimed a mandate to fully privatise Telstra, John Howard never once raised Telstra's privatisation himself. It never featured in any of his speeches or media releases and was discussed on only two occasions of which I am aware, and even then only after it had been first raised by journalists. During the campaign if Telstra was raised by Coalition candidates at all, it was either to promise to oppose privatisation outright in Barnaby Joyce's case, or, at least, to oppose it until such time as rural services were deemed satisfactory. I am not aware of a single Coalition candidate who, during the 2004 election, openly campaigned for privatisation.

"Well to start with, I think that claim that the election's a referendum on whether Telstra should be privatised is drawing a very long bow indeed, because whilst the coalition has said that our policy hasn't changed, there are obviously some conditions to be fulfilled before you'd be in a position to sell it. So I think it's jumping the gun a bit, because the conditions are pretty clear."

When Questioned about the prospects for full privatisation in the United States in October 2004, then CEO of Telstra Zwiggy Zwitkowski responded:

"With one week to run in this election and having done such a good job of staying out of the news, the last thing I'm going to do is wander off into these interesting but very sensitive areas. [my emphasis]"

Far from having obtained a popular mandate to privatise Telstra during the 2004 election campaign, the Coalition consciously avoided drawing the attention of the public to this issue, understanding full well that more forthrightness on their part would have, in fact, turned voters against them.

All this was ignored when a bare Senate majority including that of Senator Barnaby Joyce, against his undertaking to his electors, rammed through the privatisation legislation in September 2005.

In fact, the privatisation of Telstra is but one example of thousands around the world in the previous three and a half decades, justified on the same basis that so much of Australia's public policies are determined today, that is, the 'free market' economic policies of Milton Friedman. This first occurred on a systematic fashion in Chile in 1973 under the dictatorship of General Pinochet. In many other countries privatisations have similarly been accomplished against popular will, often at gunpoint. What has occurred in Australia is not fundamentally different, even if it occurred under a formally democratic parliamentary system.

Since the privatisation legislation was passed we have watched the appalling spectacle of having taxpayers' funds as well as Telstra's wealth, built up over many decades, squandered by Sol Trujillo and his imported management team. This includes the notorious Telstra roadshow costing $1.7 million in which Telstra management on the tour demanded to stay at exclusive hotels - in New York, the St Regis; in London, the Berkeley - at a cost of more than $1300 a night per person, the $204 million windfall to Investment banks, stockbrokers and corporate advisers from the T3 sale and the subsequent expenditure of a staggering $58 million spent on overseas consultants to write Trujiillo's strategy report for which Trujillo himself received his first bonus.

The people responsible for this fiasco have not been held to account. As one example, former CEO Ziggy Switkowski, in spite of being made the effective scapegoat for the parlous state of Telstra inherited by the current management of Telstra, continues to be offered lucrative responsible well-paid jobs, the latest being Chairman of the Australian Opera. Similarly, when the management of today are rightly held responsible tomorrow for the wreckage they are causing today, they will have all moved on to other lucrative careers, just as Sol Trujllo walked away from the wreckage of the US telephone corporation US West whilst pocket US$72million in a severance package.

I believe that this time the Australian public are entitled to have brought to account those who brought about the unfolding catastrophe of privatisation. These include past and serving managers of Telstra and past and present politicians who made this all possible. The politicians include, amongst others, Senators Helen Coonan, Nick Minchin, Bill Heffernan and Barnaby Joyce.

I believe that the Australian public are also entitled to expect their Parliamentary representatives to lift their game in comparison to how they have performed before now.

A good start would be for the Federal Government to assume a controlling stake in the NBN as you have suggested, better still, they could build the network outright themselves.

Why shouldn't it be possible for the Labor Government to simply expand The Department of Broadband, Communications and the Digital Economy to encompass the National Broadband Network? Or perhaps Australia Post could have its charter expanded to provide the NBN and other services that the privatised Telstra no longer provides? It would effectively become the equivalent of the old Post Master General which used to provide both postal and Telecommunications services.

If the Government had the political will they could commence the job of finally properly providing Australia with the Broadband network that Telecom had planned to have completed before 2000. It would hardly cost that much more than the the NBN would have cost with the $10 billion handout that Telstra recently demanded of the government in return for its participation. It should be possible for the Government to assume full control of the network by either directly hiring those with the necessary skills or by contracting out the work where necessary to the private sector.

If our current Government proves incapable of rising to the challenge before it, I see no reason why voters would not turn to others who are prepared to.

Thanks again for your efforts.

Please let me know if there is anything I can do to help.

James Sinnamon
on behalf of
Citizens Against Selling Telstra