Have you noticed the sudden unexpected coverage about population on the ABC?  On the 12th of March, 4 Corners ran an episode called ‘Big Australia - Are We Ready.’, Directly following this was a panel discussion QandA on ‘A Big Australia’. Since then, population has continued to be one of ‘the’ major topics of discussion in the mainstream media, including ABC radio and the mainstream press such as Fairfax and News Ltd.

It is evident that much of the main focus from the media has been to manage the symptoms of a rapidly growing population rather than the cause. However, this has also been a time of great opportunity for SPA as we been very busy over the last couple of weeks getting ourselves out there and taking part in the greater discussion.

Now is a time to reflect and celebrate some of our successes.

Tonight, [Feb 18, 2018] I appeared on the ABC’s National Wrap to debate the Migration Council’s CEO, Carla Wilshire, on Australia’s mass immigration program. Below are notes from the debate explaining my position and refuting Ms Wilshire’s key lines of argument.

By Unconventional Economist in Australian Economy at 11:01 pm on February 18, 2018. First published at https://www.macrobusiness.com.au/2018/02/leith-van-onselen-tackles-growth-lobby-monster/.

Economic modelling on immigration is unflattering and does not reflect real life:

During the debate, we got into an exchange over the purported economic benefits of immigration, as noted by the various Productivity Commission (PC) modelling.

Audience with open microphone, commenting and asking questions of Kelvin Thomson and Mayor Doyle at the "Big Population Debate" on 13 October 2014 at Deakin Edge, Federation Square, which attracted well over 200 people from peak ratepayers, planning and environmental groups. It culminated in a call by Mary Drost, of Planning Backlash, for a referendum on Australia's population growth. Both Kelvin Thomson and Lord Mayor Doyle agreed that this was a good idea. 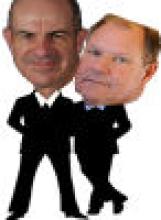 Why is Melbourne's population projected to skyrocket, all of a sudden? What is driving this? Why are people confused between refugees and economic immigration. Why can't we communicate and organise in order to bring the government into line? Why do our governments ignore the people?

On Tuesday 25 May Mark O'Connor and Bernard Salt debated Australia’s population options at the “Future Summit”, run by the Australian DAVOS Connection (ADC) at the Hyatt in Melbourne. It was a one-hour debate, moderated by Jane-Frances Kelly of the Grattan Institute, before an audience mainly of business people. Organizers were surprised by the numbers this session attracted.

On Tuesday 25 May Mark O'Connor and Bernard Salt debated Australia’s population options at the “Future Summit”, run by the Australian DAVOS Connection (ADC) at the Hyatt in Melbourne. It was a one-hour debate, moderated by Jane-Frances Kelly of the Grattan Institute, before an audience mainly of business people. Organizers were surprised by the numbers this session attracted. The session was recorded.

Originally there were to have been four panellists, but professors Roger Short and Hugh White (Strategic Studies ANU) cancelled at the last moment, leaving an hour’s debate between environmental writer, O'Connor and growth marketer, Bernard Salt. Moderated by Jane-Frances Kelly of the Grattan Institute, this parallel session surprised the organizers by attracting more than its share of the mainly business-person audience. The room was packed with more than one hundred people.

Today at the Sustainable Living Festival there was a debate on the problem of Sustainable Transport. Fortunately Mary Drost was there to keep the speakers to the point.

The first speaker was Ross Garnaut, professor of Economics and author of a climate change review. He seemed very keen on a denser population, using more public transport and talked about cities with good public transport, giving Hong Kong and Tokyo as examples.

The second speaker was Greg Hunt MP, the Liberal Shadow Minister for Climate Action. In talking about transport, he pointed out that, in relation to measuring greenhouse emissions, it is consumption per head multiplied by population numbers. He said that the time is coming for a population debate.

He then took questions. Mary Drost of Planning Backlash said that she did not want to live in Hong Kong or Tokyo, but in Melbourne. She said she did not want to see Melbourne ruined and added that she agreed with Kelvin Thomson's ideas on population numbers for Australia. She asked Greg Hunt if he would work with Kelvin Thomson to get this population debate out into the public arena.

There was much clapping from the public for her comments.

Greg Hunt, who sounded a little surprised, replied that he would 'in a bipartisan way'.