On October 23, 2014, Jill Hall, MP, Federal Member for Shortland, and Kelvin Thomson MP, Federal Member for Wills, voiced their outrage at the sickening cruelty to Australian animals in Gaza, Jordan and Kuwait could have been avoided if the Agriculture Department had acted on the massive catalogue of evidence they've been presented with over the past year. 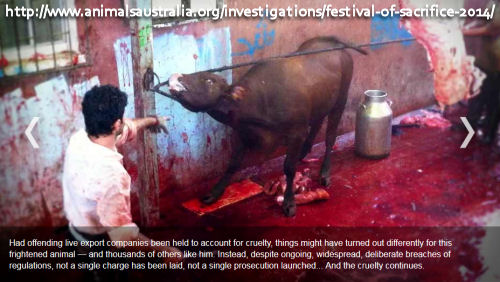 Their joint media release pointed out that export company Livestock Shipping Services (LSS) is yet again implicated in this cruelty. LSS is actually written on eartags of Australian bulls in Gaza. Australian bulls in Gaza are being stabbed to death while fully conscious. LSS is the same company responsible for regulatory breaches in Gaza last year, and implicated in regulatory breaches in Jordan.

It is a disgrace that the Department can "investigate" these breaches indefinitely and take no action. It makes a laughing stock of claims by the government and the industry that the ESCAS system is working. The ESCAS system is supposed to make exporters accountable for the fate of the animals. It is doing nothing of the kind. The government is overseeing a regulatory system which is failing in its core mission to protect Australian animals from brutal treatment.

The Agriculture Department Secretary should not give a permit to the LSS ship Maysora, currently docked in Adelaide, to take cattle and sheep to the Middle East. The Secretary could not possibly be satisfied that this exporter has an appropriate compliance record, or that no animals will be subjected to animal cruelty.

Meat and Livestock Australia should be required to report breaches immediately to the Department rather than tip off the exporters.

The export companies responsible for these outrages should have their licences to operate suspended while they are under investigation, and breaches of the ESCAS should result in prosecution. Until real penalties are handed out nothing is going to change.

The Agriculture Minister said last year 'you don't shut the road if someone speeds'. Indeed, but you do take the licence off repeat offenders.

According to an article by Brendan O'Neill in The Australian 13th March, animal activists are thought to be generally caring, ethical and "pure" people, but should remain basically maudlin and ineffective. However, if they actually become a political force they are accused of being a big "threat" and guilty of political blackmail and coercion!

Over one and a quarter million seal pups have been clubbed or shot to death over the last four years during Canada's annual seal slaughter.

Last week 30 Canadian senators, MPs and provincial ministers tucked into a meal of seal meat in the parliamentary dining room in Ottawa in protest against European opposition to Canada's annual seal cull. European Parliament made history when it voted overwhelmingly to ban trade in seal products.

Around 6000 Canadians take part in seal hunting each year along the Atlantic coast, and 25 per cent of their sales came from exporting products to Europe. Ottawa authorises the slaughter of 338,000 seals per season and says the survival of the species is not in danger. But it has faced fierce protests from animal rights groups who say the slaughter is barbaric.

Some fishermen believe that the seals preferentially dine on the nutrient-rich livers and bellies of the cod, leaving the rest to go to waste and requiring more fish to be killed to make a meal. Whales Wars' Captain Paul Watson says that's absurd, and has offered $50,000 to anyone who can provide video evidence of the practice. According to a study by Canada's Department of Fisheries and Oceans cod are preyed upon by seals at various stages in their life cycle, and also squid, minke whales, halibut, and other cod.

Still, the presence of large apex predators like seals are typically a sign of a healthy and productive ecosystem, and human fishing activity – whether it targets North Atlantic cod or bluefin tuna – is the reason for the collapse of fish stocks worldwide. 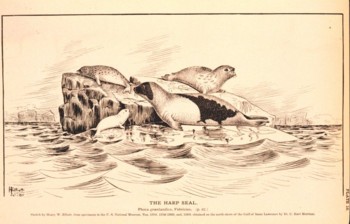 If seals were taken out of the picture, the population of squid might well explode, just like giant jelly fish numbers have exploded due to warmer waters and overfishing, and other human activities that have opened windows of opportunity for them to prosper.

The ban of seal skins may have serious consequences for the living standards of some Canadian communities. However, the means, of killing new-born seal pups in front of their mothers, does not justify the end.

The population growth rate of Canada, largely due to immigration, is higher than most industrial countries, and automatically increases human consumption of natural resources. Their east coast cod fisheries and reduction of salmon fishing in Pacific waters no longer contributes adequately to the well being of 6.8 billion people world wide.  Seals are being made a scapegoats for over-eating fish, when it is humans who are guilty.

According to the article, the EU isn't alone. More nations and international institutions now lecture apparently inferior foreigners through the animal issue. Its aim is to assert its moral and ethical authority over what it clearly considers to be a less enlightened nation, and what better way to do that than through protecting cute seals from spike-wielding madmen?. So protecting seal cubs is more about political power and moral superiority than empathy and compassion? Really! 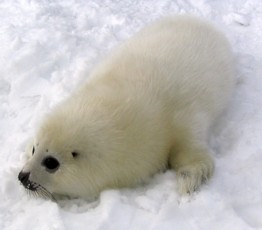 Seals and their pups do not owe swelling human populations a living, and this atrocity is morally unsustainable and unethical.   If animal activists just remained "pure", silent and innocent, then their cries of cruelty would remain ineffective.