"We cannot hide the fact that the European left has a clear agenda. They are supportive to migration. They actually import future leftist voters to Europe hiding behind humanism. It is an old trick but I do not understand why we have to accept it. They consider registration and protection of borders bureaucratic, nationalist and against human rights. They have a dream about the politically constructed world society without religious traditions, without borders, without nations. They attack core values of our European identity: family, nation, subsidiarity and responsibility. [...] We have a heartfelt compassion for the people who left their homes. They are victims of the bad governance of their own countries. They are victims of bad international political decisions. And they are victims of our bad European policy as well which raises expectations that are impossible to be fulfilled. They are obviously victims of the human traffickers. But considering them victims must not turn ourselves into being victims. Just because we do not consider them enemies we must not act against ourselves. Our moral responsibility is to give back these people their homes and their countries. It can’t be our objective to provide them with a new European life. Right to human dignity and security are basic rights.

This video is of an interview by RT with Marine Le Pen, leader of the French Front National, on the problems of the European Union for itself and for Europe. As usual she goes directly to the point, displaying her characteristic piercing wit. We have included much of RT's article below the video, in the absence of a transcript. The original article and video were published here: https://www.rt.com/news/343715-eu-collapsing-france-lepen/

RT ARTICLE: The EU is on the brink of collapse, as two of its main “pillars” are “crumbling” despite the billions of euros spent on keeping the structure from falling, far-right French leader Marine Le Pen told RT, adding that the union would fail if France left it.

“I believe that the European Union is in the process of collapsing on itself for one simple reason. The two pillars on which it’s founded – Schengen and the euro – are in the process of crumbling,” Le Pen told Marie De Douhet of RT France in an exclusive interview. “So they’re in a sort of mad downward spiral in which they’re capable of anything today to try and keep this building standing.”

With less than one week to go until the First ever European Presidential Debate broadcast live on Euronews, hosted by the City of Maastricht, Maastricht University, Connect Limburg and the European Youth Forum, the format and themes of the debate have been announced. The debate will see the candidates for the presidency of the European Commission battle out key issues on the future of Europe. With its focus on youth issues, it is hoped that the debate will ignite young people's interest in the European elections and encourage them to vote.

The media’s treatment of the recent tragedy of migrants drowning off the Italian island of Lampedusa was predictable. Whenever a local population—whether it be in Greece, Italy, or elsewhere—is inundated with a flood of refugees, a standard news template is applied.

The formula is to convert a broad social calamity into a heart-rending human-interest story that will provoke an emotional response trumping any sober analysis. The intended message is clear. Any number of refugees have an unreserved right to be accommodated by the host society, at whatever the cost.

70 per cent of Syrians voted in referendum to end one party rule and to have elections but have been hit by EU sanctions anyway. Aljazeera reported that no-one would vote, but it seems that a lot did. Basically the world is dividing into an Eastern and Western bloc over this, with Russia and China supporting Syria's right to settle its own affairs and the US and other Anglophone western nations and the EU are looking for a pretext to intervene and threatening crippling sanctions. Further down we might expect EU imposition of a no-fly zone to give them an excuse to invade, as has already happened in Libya. Is the end-objective to isolate Iran for its oil reserves? What's up? Here are some views. (Incidentally, a shock inside for Australians - we are 2nd highest ranking weapons importers. What are we doing with them? Are we on-selling? And who's making money out of this?) 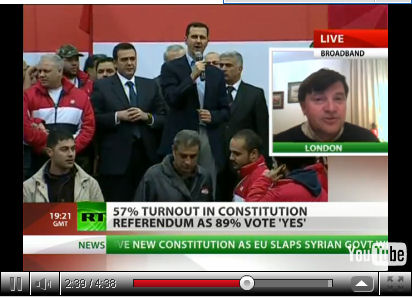 According to an article by Brendan O'Neill in The Australian 13th March, animal activists are thought to be generally caring, ethical and "pure" people, but should remain basically maudlin and ineffective. However, if they actually become a political force they are accused of being a big "threat" and guilty of political blackmail and coercion!

Over one and a quarter million seal pups have been clubbed or shot to death over the last four years during Canada's annual seal slaughter.

Last week 30 Canadian senators, MPs and provincial ministers tucked into a meal of seal meat in the parliamentary dining room in Ottawa in protest against European opposition to Canada's annual seal cull. European Parliament made history when it voted overwhelmingly to ban trade in seal products.

Around 6000 Canadians take part in seal hunting each year along the Atlantic coast, and 25 per cent of their sales came from exporting products to Europe. Ottawa authorises the slaughter of 338,000 seals per season and says the survival of the species is not in danger. But it has faced fierce protests from animal rights groups who say the slaughter is barbaric.