Cdb Ed Update: Broken link to source of this article has been fixed. Vladimir Putin has backed the idea of expanding a program that offers citizens a free hectare of land in Russia’s Far East to all of the country’s regions. The Russian president made the comment during one of his annual Q&A sessions on Thursday. Source: Putin backs extending free land giveaway all across Russia 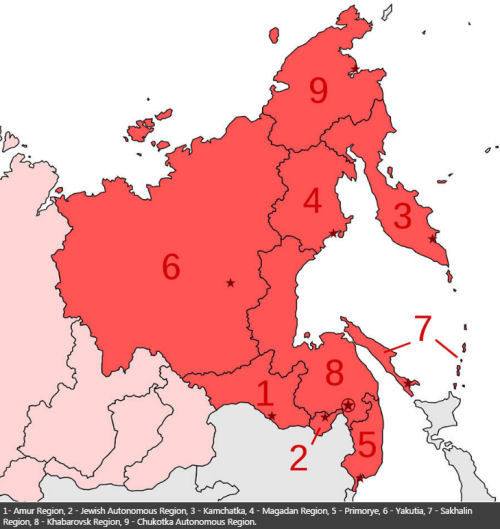 When asked whether the free land program in Russia’s Far East could be expanded to other regions, Putin answered “there is enough land in Russia. Forty-three million hectares of farmland alone are not used for their intended purpose. These are huge, just huge land reserves.”

However, the president stressed that the program in the Far East should be realized first.

Under the Russian version of the Homestead Act, every citizen can get a free hectare of land in the Far East, if they are willing to put it to good use. Within the first year, the recipients must declare how they want to use the land, and, in three years, must report on how it is being developed. After five years, the land can be sold or leased.

This article is adapted from a talk with power point given to U3A Deepene on March 15th 2017 by past president of VicTas branch of Sustainable Population Australia, now secretary, Jill Quirk, who is also now the secretary of Protectors of Public Lands Victoria. The talk explored the noticeable effects of rapid population growth and compared some past and current projections for Melbourne’s population to mid–century and beyond, considering what Melbourne on current trends might be like in 50 years. These comparisons, not usually available, make it clear how Victorian governments have increasingly snowed citizens with every successive plan for Melbourne.

When change happens slowly people are less likely to notice but as it speeds up they do. Older people will notice change more as they have a longer perspective.

Neighbours squabbling over the back fence. The english language NYT newspaper reports sham dogfights daily between Greek Mirage fighters and Turkish F-15s. A NATO wargame and cyber-wargame around Lesbos was cancelled due to a Greek-Turkey squabble. Turkey still claims all the Aegean islands slap-bang up against their coast. No-one remarks on the irony of 50,000 muslim economic migrants camped up on Lesbos and Samos. "Inhuman racist treatment" scream the UN & liberal left cosmopolitans. But there is silence on the million or more criminal invaders, aka undocumented aliens, camped up in Turkey, in far worse conditions. My. Refugees in Turkey don't even have access to a lawyer! The shame of it!

A lot of people like Europe, but I feel uncomfortable as a grey tourist. Long haul Muslim airlines. How to enjoy yourself with dreadful coffee, the country bankrupt, and everyone spending all day & night, sitting around in cafes. Kalamata.

DESPERATE for a newspaper fix I found the only shop in this city to sell foreign language papers -(including Charlie Hebdo). I bought a paper New York Times with Greece supplement. I like the NYT long format thoughtful articles. The richest city on earth can afford to have progressive liberal feelings towards refugees and the downtrodden.

Lawyers for Animals have sent in this very interesting submission to the Victorian Inquiry into the RSPCA. (See link to inquiry here: "RSPCA Vic Inquiry about to close but you could make a late submission".) It will be helpful to some of you who want to make submissions and generally informative about the role and duties of the RSPCA. Basically it argues for a new dedicated Animal Cruelty Investigation Squad (or similar) within Victoria Police and the removal of the RSPCA's Inspectorate powers and funding, permitting it to refocus on animal care and to engage in public advocacy for animal welfare. Among the reasons given are that the RSPCA has not got the funding to attend to the thousands of complaints it receives and that it lacks financial indemnity against being sued. The submission mentions a case where the RSPCA was recently sued for over $1m in farm losses, which has caused it severe financial problems. We have republished this interesting and useful submission from Lawyers for Animals with some slight changes to layout but none to content.

Candobetter.net has only just heard of this inquiry which closes today. However the Secretary of the inquiry has been contacted and she indicated that if individuals write in to this address: rspcavicinquiry@parliament.vic.gov.au and request to make a late inquiry, stating who they are and how much time they might require, such as a week or two, permission will probably be granted. The inquiry seems to have been poorly publicised because a lot of people have only just found out due to an animal rescue group writing to various other groups and individuals to complain that there are only about 16 submissions. But it seems that very few people were aware of this inquiry. So, please consider making a submission. Here is the website address: and inside this article I have noted some of the terms plus a link to an e-form, although emailed subs are apparently also acceptable.

Are the meltdowns at Fukushima Daiichi over? The answer is no. Made all the more prevalent a year out from it's initial release by the recent robotic expeditions into Reactor #2 which gave us a clearer picture on just how deadly the radiation levels are, watch Chief Engineer and nuclear expert Arnie Gundersen inform viewers on what’s going on at the Japanese nuclear meltdown site, Fukushima Daiichi. As the Japanese government and utility owner Tokyo Electric Power Company push for the quick decommissioning and dismantling of this man-made disaster, the press and scientists need to ask, “Why is the Ukrainian government waiting at least 100 years to attempt to decommission Chernobyl, while the Japanese Government and TEPCO claim that Fukushima Daiichi will be decommissioned and dismantled during the next 30 years?” Article and video from http://www.fairewinds.org/.

On February 8, 2017, Syrian President Bashar al-Assad and his wife, Asma al-Assad (the one with the pony-tail) met with women and children who were held in captivity by Islamist militants for more than three years. It is common for Syrian citizens to embrace the president and his wife like cousins, even on first meeting; this is a closeness within Syria. These civilians were kidnapped by the jihadi groups in 2013, when the last ones attempted to capture several towns in the northern countryside of the Latakia governorate. The prisoner swap between the Syrian authorities and Islamists was concluded yesterday, with each side pledging to release 54 women detainees. Thus, the insurgents will set freee 54 women who were kidnapped from northern Latakia countryside in 2013, in exchange for the same number of women imprisoned by Syrian authorities. On August 2013, a coalition of Islamist 'rebels' wich at the time included the Free Syrian Army (FSA) and the Islamic State of Iraq and al-Sham (ISIS) launched a powerful assault to conquer the city of Al-Haffah in Northern Latakia. Although the assault was successfully repelled by government forces, the jihadists brutally massacred and kidnapped hundreds of civilians from Alawite-inhabited villages before leaving the area.

According to journalist Yanatab Zunger, Donald Trump currently appears to be targeting the CIA and its other Deep State cronies for extinction -- while at the same time hiring his own security team to protect himself.  Ah, if only President Kennedy had engineered this kind of power-grab/self-protection combination when he was first elected, he would still be alive today and we would live in a whole different (and far better) world. @yonatanzunger/trial-balloon-for-a-coup-e024990891d5#.dg9vu3e70" id="yiv3591735947yui_3_16_0_ym19_1_1485968960948_28304" rel="nofollow" target="_blank">https://medium.com/@yonatanzunger/trial-balloon-for-a-coup-e024990891d5#.dg9vu3e70