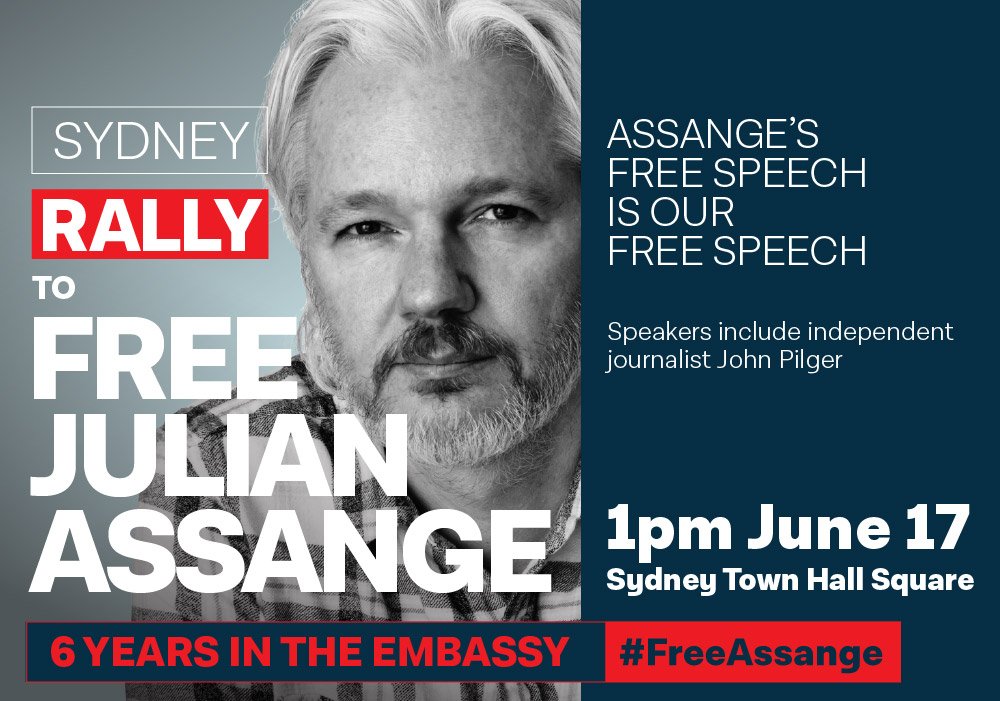 At 1:00pm on Sunday 17 June, there will be a demonstration at the Town Hall Square in Sydney to demand freedom for the heroic and visionary Australian journalist, Julian Assange. Julian Assange has been illegally imprisoned [1] in the London Ecuadorian Embassy for almost six years now The alternative to his ongoing imprisonment is extradition to the United States, show trial, and long imprisonment, should he be made to leave the embassy. Should Assange remain, he faces grave threats to his health due to a lack of exercise within the embassy walls and lack of direct sunlight, so far, for six years.

The demonstration has been called by the Socialist Equity Party (SEP). The excerpt below, from the SEP's article advertising the protest, explains Julian Assange's plight:

Assange's situation stems directly from the Australian government's refusal to protect one of its citizens from persecution by other governments. Canberra has instead trampled on Assange's rights in the most reprehensible manner.

The American state accuses WikiLeaks and its personnel of "espionage" for publishing leaked data in 2010 that exposed the extent of its war crimes in Iraq and Afghanistan and its sinister intrigues around the world. Last year, WikiLeaks published further material that exposed CIA operations to hack and spy on Internet and other communications.

If Assange were put on a show trial in the US, he could face decades of imprisonment, or even the death penalty (my emphasis), for doing what a journalist should do: provide the world with the truth.

In late 2010, the Australian Labor government of Prime Minister Julia Gillard took no action when a Swedish prosecutor initiated a politically-motivated investigation into allegations that Assange “may” have been involved in sexual assault. Under conditions of a furious campaign against WikiLeaks for the damning information it was publishing about US war crimes, the aim of the slander was to both discredit Assange and justify a warrant for his extradition to Sweden for “questioning.” If he were detained in Sweden, Assange and his lawyers rightly feared he could have faced rendition on to the US.

Instead of defending Assange, Gillard and her Labor ministers denounced WikiLeaks for "illegal" actions and declared they would assist the US to prosecute him.

Denied any protection by Australia, Assange was forced to seek political asylum in the Ecuadorian embassy in London on June 19, 2012, after a British court rejected his last legal appeal against extradition to Sweden. For six years, he has been effectively imprisoned in the embassy by the insistence of the British government that if he leaves the building it will arrest him on a charge of absconding on bail. The British government, moreover, has refused to give any guarantee that it would not facilitate his extradition to the US (my emphasis).

This was despite the finding of a United Nations working group in February 2016 that Assange had been arbitrarily detained in contravention of his human rights, and should be allowed his freedom.

In May 2017, Swedish authorities, after finally agreeing to question Assange in Britain, dropped their investigation. No charges were ever laid against the WikiLeaks editor.

The Australian government of Prime Minister Malcolm Turnbull, however, refused to intervene and demand that Britain drop its pursuit of Assange over bail-related issues and allow him to leave the London embassy.

After six years of confinement inside a small building, with no direct sunlight and deprived of necessary medical treatment, Assange's health was already severely compromised before the immense pressure of almost total isolation was inflicted on him. Reports indicate that Assange is being pressured by Ecuador to leave the embassy, or that the Ecuadorian government may even renege on its grant of asylum and hand him over to waiting British police.

Under conditions in which the British government will not relent on its determination to charge Assange, or guarantee he will not be extradited to the US, the full culpability of the Australian government and the broader political and media establishment is evident.

The Australian state has undeniable means at its disposal to extricate an Australian citizen and journalist from persecution. It can act to return him to Australian territory and provide him with an unconditional guarantee that he will not be extradited.

There are obvious recent precedents.

Australian journalist Peter Greste was arrested by Egyptian authorities in December 2013, along with other Al Jazeera employees, on framed-up charges of “damaging national security.” He was subjected to a show trial and sentenced to seven years’ imprisonment.

In response to immense public outrage in Australia, the government, backed by Washington and the United Nations, called for Greste’s release. Intense diplomatic pressure was applied on Egypt. On February 1, 2015, Greste was released and deported back to Australia.

Earlier, in 2007, under the pressure of widespread anger over the imprisonment of Australian citizen David Hicks in the US concentration camp at Guantanamo Bay, the government entreated the Bush administration to release him.

If the British government continues to insist on railroading an Australian citizen into an American prison or worse, then there are a wide range of actions that the Australian government can take to secure his return to Australian jurisdiction.

It would only do so, however, under conditions of the greatest pressure produced by the mobilisation of the working class. Under both Labor and the Liberal-National Coalition governments, the Australian state has demonstrated its hostility to Assange and WikiLeaks.

The article cited above is spot on when it says:


The Australian state has undeniable means at its disposal to extricate an Australian citizen and journalist from persecution. It can act to return him to Australian territory and provide him with an unconditional guarantee that he will not be extradited.

Had the Australian government carried out its basic duty of care as suggested in the above quote and as it had towards Peter Greste, also cited in the article, this whole shameful episode could have been ended years ago.

Other rallies for Julian Assange in Sri Lanka and India - #whyNotMelbourneAlso">Why not Melbourne also?

Rallies for Julian Assange are also to be held on 19 June in India and Sri Lanka.

The Socialist Equity Party must be applauded for publicising Julian Assange on the pages of the World Socialist Web Site and for taking the intiative to organise this rally in Sydney. However, I am sure that a good many others in other parts of Australia - Brisbane, Townsville, where Julian Assange was born, Melbourne, where he spent more than 15 years of his life before leaving Australia, Canberra, etc. - would also like to show their support.

Unless another rally is officially called in the meantime, those, in Melbourne, who want to show their support for Julian Assange could, perhaps, at 1pm on Sunday 17 June, the same time as the Sydney rally, assemble, with placards and leafleats, on the steps of the Victorian State Library as supporters of Syria did on Monday 30 April.

In the video embedded above, Bob Beckel, a former presidential strategist calls for the U.S. to "illegally shoot the son-of-a-bitch". Also, in that video, another spokesman for the U.S. government said of Julian Assange "that if we catch you, we're going to hang you."

[1] Two rulings by the United Nations have found the detention of Juian Assange in the Ecuadorian Embassy to have been illegal. So, figures in the the Swedish government, the British government, including Prime Minister Theresa May, and others complicit in the detention of Julian Assange since 19 June 2012, almost 12 years ago, have broken international law and should face trial before the International Criminal Court for their actions. 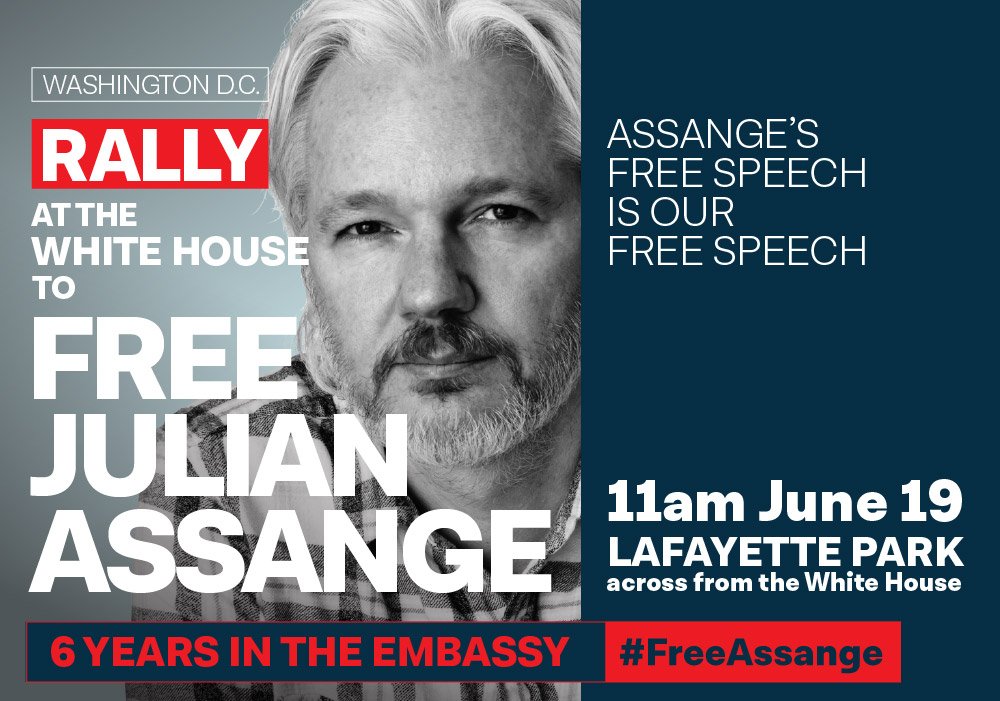 Julian Assange's free speech is our free speech#FreeAssange! 11am Rally opposite the White House, Lafayette Park

Julian Assange is a journalist, not a spy. Because he published leaked material that proved the duplicity and criminality of the US Government, Washington has had him locked up in the Ecuadorian embassy in London since 2012 and is now negotiating with the new president of Ecuador to revoke his asylum and turn him over to the US. Conspiracy Builds to Force Assange Out of Ecuadorian Embassy (8/6/18) by James Cogan |Information Clearing House.

Assange's fellow Australians are organising a rally in his defense in Sydney on June 17. See /node/5518 (this page - JS). People throughout the Western world need to rally to the support of this man who has worked to provide truthful information in place of elite-controlled explanations.