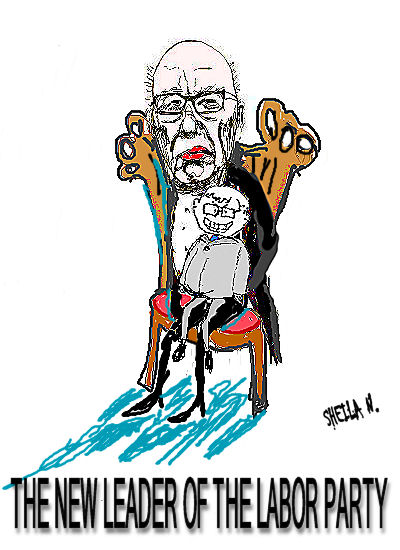 Leadership spill from this woman's point of view

To me, Rudd looked like a man unable to cope with being replaced by a woman, being manipulated by the male dominated mass media for their own ends.

AUSTRALIA FIRST PARTY - Order of the Toad citation of 2012. Kevin Rudd. Displaying the qualities of a subservient peon by compromising the independence and integrity of the Australian People, in colluding to the demands of imperialist war mongers to establish American military bases on our Native Soil.

It seems to me that Julia Gillard has been punished for doing a good job as PM in a difficult situation. I don't know where the heads of her colleagues were tonight when they voted against her . I guess they'll wake up one day, probably fairly soon and realise what fools they are.

We need some leadership in Australia - position vacant!

What will the voting public gain from K Rudd's reappearance? He's already shown that he's a failure. He's full of grand gestures, but without substance. The real problem is that we lack leaders in Australia. We have rising costs of living, a corrupt and out of control immigration policies, housing is some of the most expensive in the world, and unemployment rising. The people of Australia want some real leadership, and while there is continual bickering and squabbling inside the Labor party, Australia will continue to be rudderless! This change in leadership is simply moving-the-deckchairs-on-the-Titanic! It makes little difference ultimately. Julia Gillard was doing an adequate job in the face of adversary, and now we have BigKev back again! Bringing forward the election will stifle democracy by limiting the time smaller parties have for their campaigns. There needs to a be dramatic and earth-moving change in Australia's political direction. We need a new Australian image, and a reawakening of patriotism. Foreign workers, foreign buyers of land and housing, foreign students, record immigration, and foreign imports are all about globalizing and making Australia a generic, international piece of land. The time of "White Australia" are looking attractive - we at least had the "Lucky Country", high living standards, wealth, and an identity!