In spite of the fact that 79% of the Queensland public oppose privatisation, 66% would support industrial action to stop the Bligh Government's $15 billion fire sale and many union members have expressed a willingness to strike, the Queensland unions have failed to take the only action that could possibly cause the Queensland Government to change its mind.

See also: Queensland Not For Sale - the Qld Council of Union's anti-privatisation web site, Railing against privatisation by Daniel Hurst in the SMH of 29 Apr 10, Paul Lucas heckled at Labour Day march in Brisbane, as PM talks up super changes of 3 May 10, ETU raises white flag in fight against Queensland fire sale - Why? of 30 Apr 10.

The following is taken from a PDF leaflet (69KB) I intended to distribute on Labor Day. Unfortunately, a friend's photocopier, which I had been relying upon to duplicate these broke down, so they were not distributed. Some of the material is borrowed from my article ETU raises white flag in fight against Queensland fire sale - Why? of 30 Apr 10. - JS

In disregard of the wishes of 79% of the Queensland public, the Bligh government is pushing ahead with plans to sell off $15 billion of our assets. 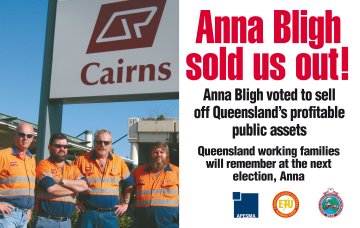 Example of billboard featuring angry union members. Were
these ever intended by our union officials to be more than
empty bombast?

When the fire sale was first announced, in May 2009, 2 months after the elections, the outcry from the Queensland public was unprecedented. In the following months talk-back shows, newspaper letter columns and online forums were overwhelmed with opposition to the sale. Many people previously unsympathetic to trade unionism actually pledged their support for any industrial action against the sale.

That industrial action would have enjoyed public support was confirmed in December when a Courier-Mail online poll indicated 66% public support for the Redbank railway workers who struck upon learning their workshops were to be included in Fraser's privatisation plans.

The following motion was carried unanimously by a mass meeting of AMWU members at the Redbank workshops in June 2009:

This meeting of AMWU members condemns the asset sales devised by the ALP state Labor Government. We recognise that without a sustained campaign of industrial action, nothing will stop the sales from proceeding. Anna Bligh herself has said that she won't negotiate on the sell-off. We need to force her hand and the only way we can do that is industrially. We need an ongoing campaign of industrial action through rolling strikes in conjunction with community protests. We demand that our state secretary approves of any industrial action worked out collectively by the membership and seeks the support of the other railway unions.

Yet the unions failed to act.

Instead, they decided to undertake a long drawn-out campaign with redundant priorities, notably to 'convince' a public already solidly on-side. They also warned the Bligh Government of terrible retribution at the ballot box in 2012.

They seemed not to realise that the delay involved in an unnecessary attempt to convince the minority 16% of the Queensland public to oppose the sell-off would assist the further legislative and financial entrenchment of the sales (for example the $200 million paid to the commercial banks to oversee privatisation).

At a privatisation forum on 10 April, Queensland ETU Branch Secretary, Peter Simpson gave his view that the fight against privatisation was already lost, as I recollect, for the reasons decribed above. In view of Simpson's gloomy prognosis, perhaps union members and the broader public that had looked to unions such as the ETU to show leadership are entitled to know:

In fact, although the fight has been made needlessly more difficult, the fight to stop privatisation is far from over.

Any union, which stands up to the Bligh Government, is almost certainly assured of overwhelming support from the Queensland public, disgusted by this Government's dictatorial arrogance and wanton deception in the 2009 elections.

An excuse sometimes offered to not take industrial action is the fear that the unionists may face punitive fines under anti-union laws inherited from the Howard Government. However, when railway workers struck against privatisation last December, the Bligh Government dared not invoke these laws against them and there is no reason to assume that they would dare do so now against workers striking against policies opposed by more than 79% of the Queensland public.

What you can do: Demand that your unions call meetings to give you the choice of whether or not to oppose privatisation with industrial action. Support other unions which take industrial action. Send me a copy of any motions carried, so that I can make these known to others on http://candobetter.net.

See also: Queensland Not For Sale - the Qld Council of Union's anti-privatisation web site, Railing against privatisation by Daniel Hurst in the SMH of 29 Apr 10, Paul Lucas heckled at Labour Day march in Brisbane, as PM talks up super changes of 3 May 10, ETU raises white flag in fight against Queensland fire sale - Why? of 30 Apr 10.