While mainstream press is only reporting that Turkey's Prime Minister Recep Tayyip Erdogan, blocked twitter, the reason he did so goes unreported. Yet that is the most interesting and shocking thing: A leaked conversation between Turkey's intelligence chief and the war room reveals plot to create a casus belli for war with Syria by using ISIL, an alQaeda offshoot, to threaten a turkish shrine Suleiman Shah Tomb. Turkey has blocked youtube in order to cover up the leaks. Turkish Foreign Ministry confirmed the recording of planning for a military incursion into Syria adding that a 'network of treason' was responsible for leak. Part two of the leaked conversation implicates John Kerry US secretary of state in the plot.[1] Retitled from original title which was, " EXPOSED: John Kerry, Turkish PM and Co implicated in Turkey False Flag Using AlQaeda To Start War With Syria".

Another sign of overpopulation and resource competition: We publish a press release from a commercial anti-pirate operation which offers naval escort services across the Gulf of Aden, the Arabian Sea and the Indian Ocean, where easy collection of oil is no longer guaranteed. "In West Africa in the area known as the Gulf of Guinea, where there is no UK, EUNAVFOR or US Naval presence (nor is there planned to be), maritime crime is escalating and is spiralling to such levels that the UN Security Council has recognised it as a specific threat to international security (Resolutions 2018 [2011] and 2039 [2012]). It is estimated that the state of Nigeria is losing $1bn of crude oil through theft every month."

Typhon is launching its marine convoy escort service with immediate effect. This service enables ship operators to transit the Gulf of Aden, Arabian Sea and Indian Ocean in unprecedented safety while saving time and money. The company is now opening discussions with potential clients and negotiating long term contracts.

(This article also looks at related population, immigration and democracy issues in the West.) A film, Innocence of Muslims has been released of which parts available on you-tube portray the founder of Islam in a bad personal and political light, to say the least. A strong theme depicts Muslims as aggressively anti-Christian. Apparently largely as a response to this film, there have been widespread riots by Muslims against foreign embassies, particularly US embassies, including riots in Sydney on 15 September 2012, with police injured. Meanwhile warships from more than 25 countries, including the United States, Britain, France, Saudi Arabia and the UAE, are together launching a military exercise in the Straits of Hormuz, in response to threats to close it off. There is plenty of reason for Muslims to be angry with and frightened by the West apart from that film. And maybe Westerners should hold their own governments to greater account if we are to avoid World War Three.

Australia's new Foreign Minister Senator Bob Carr continues his predecessor's enthusiastic volunteering of Australia in the Coalition of the Willing, this time against Syria. Between 1991 and now, the Coalition caused the deaths of possibly 1,500,000

The events of “Arab Spring” have given the United States an opportunity to reevaluate our entire foreign and military policy. That reevaluation has not yet happened, but it must. End the empire!

The events of “Arab Spring” have given the United States an opportunity to reevaluate our entire foreign and military policy. That reevaluation has not yet happened, but it must.

Cynthia McKinney is an unusual black US former congresswoman who has risked her life to report on the situation in Libya from Libya on what she calls the "Truth Tour". The article below contains her most recent report, which contains parts of alternative journalists' articles and criticises mainstream journalism. The video where she speaks, included here, is an addition. It is quite rivetting stuff. 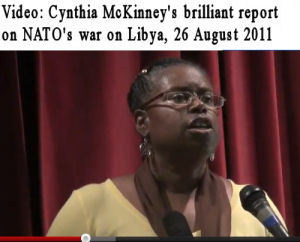 From Cynthia McKinney: "Still in the Truth Tour"

Thanks to all who have come out and participated in the Truth Tour. I have almost come to its end. Last night in Detroit, several of the women were moved to tears as I explained the situation in Libya right now as I know it to be. Every venue has had every seat occupied or was filled to capacity with standing room only.

Fidel Castro, Muammar Gaddafi and Hugo Chavez are three men of different eras who have lived a similar desire to defend the rights of the nations they represent and to network with other struggling regions over international trade and political representation. The nations and regions they have championed all have suffered greatly at the hands of the United States. These leaders have confronted political realities that simply are not acknowledged in the mainstream western press. Chavez recently spoke again about Libya and of the danger of the predatory US taking advantage of his current illness, for which he is being treated in Cuba.

Castro came to power in 1959 and only recently stepped down in favour of his brother.

I have learned that, far from being a bloody despot or a fool, Muammar Gaddafi was, and is, a courageous and visionary leader of the Libyan people. I learned this, of all places, from a broadcast embedded in the pages of an article in Rupert Murdoch's Australian newspaper. Elsewhere, the Australian has been feeding the public the lies used by NATO to justify its criminal war against the people of Libya. Viewing this video has caused me to realise what a tragic loss for all humankind it would be if Muammar Gaddafi were to perish at the hands of NATO and its TNC puppets.

Anybody with an inquiring and critical mind, access to the Internet, and sufficient time would long ago have seen through the deceit in the mainstream media's coverage of the Libyan conflict.

The islamist Libyan 'rebels', recognised by Australian Foreign Minister Kevin Rudd as the legitimate government of Libya and who are cheered on by phoney socialist organisations, intend to bring back the Sharia Law that Libyan President Muammar Gadhaffi abolished when he came to power in 1969. The rights enjoyed by women in Libya today, taken for granted by women in any modern western democracy would taken away if the NATO-backed "Transitional National Council" were to become the government of Libya. Gadhaffi's strongest supporters, amongst the overwhelming majority of Libyans who express their support for him every day at popular demonstrations, are the women of Libya who have no wish to return to domestic servitude.

Some, who present themselves as opponents of war, have spent more time cataloguing Gadhafi's past real or alleged shortcomings than rallying people to oppose the current, all-out military attack on the sovereign nation of Libya by the United States and its NATO allies. Their influence would be small, except that it coincides with the opinions of the U.S. ruling class. Thus it is important to thoroughly answer their arguments.