On Wednesday April 1, 2015 at Yarmouk Palestinian camp in the outskirts of Damascus, a ceremony was held, organized by the Syrian Ministry of Reconciliation. However, the camp was attacked by elements from the nearby village of Hajar al-Aswad, allied with some ex-militants of Hamas who first joined the Al-Nusra Front (al-Qaeda) and who have now joined Daesh. [ISIS.]
During several hours, heavy fighting between Daesh and the various Palestinian militias, including their former comrades of Hamas. By late evening, the jihadists controlled most of the camp. But during the night, the Syrian Arab Army deployed reinforcements and Daesh withdrew completely.This article republished from Voltaire Network, 3 April 2015 Underneath is a second Voltaire.net article which alleges the presence of Israeli Mossad agents provocateur in Yarmouk.

On Thursday 18 December 2014, Russian President Vladimir Putin gave a Press conference. It included his address which lasted from 9:12AM until 12:38PM GMT. President Vladimir Putin has been condemned by Australian Prime Minister Tony Abott and the Australian newsmedia for alleged Russian aggression against Ukraine and complicity with the alleged shooting down of the Malaysian Airlines Flight MH17. In spite of this not one of the Australian journalists, nor any other Western journalist present put these allegations to President Putin. Roman Tsymbalyuk of the Ukrainian News Agency UNIAN did put those allegations. Both his question and Vladimir Putin's response are included.

This article has been republished from the article of 28 July by Thierry Meyssan on Voltaire Net. See, also, other articles on candobetter about Bashar al-Assad and Syria, including What 'dictator' ever willingly faced such media scrutiny? of 11 June 2013. More information about Syria is to be found at the Syrian Arab News Agency (SANA) and Syria News. Includes Appendix: Anti-imperialists who feel obligated to depict the Syrian Government as corrupt. 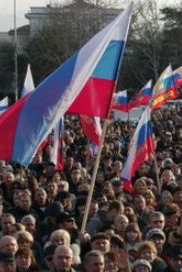 President Johnson, who colluded with Israel in its unsuccessful attempt to sink the USS Liberty and blame Egypt
#F5F3DA;font-size:100%;line-height:120%">Editorial Introduction: This article, by Laurent Guyénot, first published on Voltaire Net on 2 May 2013, covers critically important historical events which commenced with John F. Kennedy's Presidency (1961-1963) and ended with the 6 Day War of 1967. On 8 June 1967, the fourth day of the Six Day War, even though the United States was an ally of Israel, Israeli warplanes bombed the intelligence ship, the USS Liberty in the Mediterranean Sea and began strafing sailors in the water in an attempt to ensure that there were no survivors. The clear intention was to blame the sinking of the USS Liberty on Egypt and use that as a pretext for the United States to join Israel in its war against Egypt and other Arab nations.
#FFFFFF;height:8px;">
#F5F3DA;">The sinking of the USS Liberty was intended to be a classic false flag terrorist attack like 9/11 and in the mould of the Operation Northwoods proposal which had been put to former President Kennedy in March 1962 and rejected. However, the presence of witnesses on a nearby Soviet warship prevented the Israeli warplanes from finishing their work and foiled Israel's plan to attribute this crime to Egypt. This was done with the active collusion of U.S. President Johnson, who subsequently attempted unsuccessfully to cover it up. A war on a much larger scale -- potentially even an all out nuclear war -- was thus prevented. The criminality of the current President Obama and his Secretary of State John Kerry, who was recently caught out lying about Syria, has more than one chilling precedent 17 in the actions of President Lyndon B. Johnson (LBJ).