Environmental organisation Friends of the Earth and community group Friends of Banyule have expressed their extreme disappointment at today’s announcement that the Planning Minister Richard Wynne has approved the North East Link.

The project has been approved without extending the tunnel northwards, contrary to the Minister’s own Environmental Effects Statement Planning Panel’s advice and pleas of impacted families and community groups.

In the decision, Minister Wynne stated that “the project will produce significant environmental impacts, borne largely by the community of Melbourne’s northeast during a protracted construction period”.

Victoria’s Planning Minister, Richard Wynne recently dropped a bombshell on thousands of apartment owners whose buildings are covered in flammable cladding.New loan laws likely to be passed by Parliament have been billed as a kindly gesture to help owners of apartments covered in the flammable cladding to ffund the rectification costs. This news might seem a worthy initiative, except that the most iniquitous elements in this scandalous swindle are unspecified. Principally, Wynne’s decree provides that owners who bear no blame for this combustible catastrophe are to be burdened with a debt that could run into billions of dollars. [Article first published at https://www.thefifthestate.com.au/innovation/materials/apartment-owners-dodgy-cladding/ on 13 September 2018.] 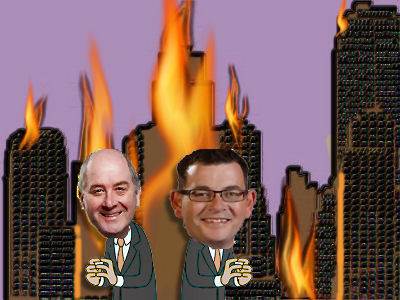 Why are building owners forced to foot the bill?

The answer to this question is very simple. In line with past policy, the government has decided to protect rogue builders and transfer responsibility to blameless owners.

"In an irresponsible and callous move and buried in the discussion paper of the Authority To Control Wildlife Review, the Daniel Andrews’ Government has signalled interest in adopting a policy that will see ALL sick, injured and orphaned kangaroos, wombats, possums and cockatoos KILLED instead of rescued and rehabilitated. This short-sighted and catastrophic policy may act to drive wildlife carers underground and will see members of the public refusing to hand over animals to vets and shelters in the fear that joeys and saveable animals will be automatically killed, resulting in horrendous and widespread animal suffering." (Helen Round, Wildlife carer, Macedon Ranges, Victoria.)

Text of letter to media

As one of the wildlife carers in Victoria, who shoulders much of the cost and responsibility of caring for sick, orphaned and injured wildlife in Victoria, I am writing to you because of a recent horrific proposal coming from the Andrews' State Government that could force Victorian wildlife carers to kill all healthy, saveable and viable kangaroos, wombats, possums and cockatoos that come in to care.

"Streamlining" in this case is a euphemism for increasing the capacity of Hoddle Street for higher volumes of vehicle traffic every day. Whilst dedicated bus lanes are part of the project the Andrews government intends that the overwhelming future growth in traffic movements will be passenger cars.

The project was previously under serious consideration by the Brumby Labor government which lost office in 2010. It was sidelined by the incoming Baillieu government which, at least initially, sensibly "parked" the project with a view to, at last, building a rail line to Doncaster Hill instead. That did not materialise in the wake of an inadequate analysis that contemplated a rail line from Melbourne CBD, not to the major passenger destination of Doncaster Hill, but to the "Park and Ride" at the intersection of the Eastern Freeway and Doncaster Road in Doncaster.