Sustainable Population Australia (SPA) are partnering with filmmaker Maxine Trump on the Australian premiere of her award winning film To Kid or Not to Kid in Melbourne and Perth on the 26 and 27 February. The documentary is being screened as part of SPA’s ‘Stop at Two’ campaign. This will be the first time the film will be screened in theatres before being released on Amazon Prime on February 27th.

"Media resistance has always been one of the big problems," says Sandra Kanck, who came from a family where there were seven children and she learned early that one wage did not go as far for seven as it might for fewer. From 1994-2009 Sandra served as an Australian Democrats’ Member of the upper house of the South Australian Parliament.

Sustainable Population Australia (SPA) has called on the new Immigration Minister, Brendan O’Connor, to heed the findings of a paper issued yesterday. It found that the number of migrants arriving in Australia since the beginning of 2011 who found jobs about equals the number of new jobs created in Australia for everyone over the same period.

Sandra Kanck gives her account of what preceded her 'expulsion' from the Australian Democrats over the matter of population policy. Sandra was an Australian Democrats member of the South Australian Legislative Council from 1993-2009 and the last Democrat member in elected government. When she retired she became the president of Sustainable Population Australia (SPA) and still is.

The environmental group at the centre of the controversy between its national president, Hon. Sandra Kanck, and the Australian Democrats has countered claims by those who expelled Ms Kanck that it is a political party.

On 11/12/2012 newspapers reported that Sandra Kanck, last Australian Democrat to leave parliament, now president of Sustainable Population Australia, had been 'expelled' from the Democrats by John Davey, a professional migration agent, in the role of "Democrats National Executive spokesman." Davey is reported to have said that "the decision was made as a "last resort" after Ms Kanck refused 'repeated requests to put appropriate distance between her activities amongst other special interest groups and the Democrats'". Senior Deputy National President Darren Churchill defended Kanck, saying that a group of seven people had attempted to take control of the party and was "removing anyone who stands up to them". It seems incredible, but is this also the same John Davey of the Democrats whom in 2002 Crikey.com referred to as a "former porn lobbyist" and "Director of the Eros Foundation, the lobbying group for various naughty interests" in "The power behind Brian Greig’s throne [in the Australian Democrats]"?

Illustration on teaser was reduced from original at http://www.gerasimon.com.au/australian_oil_painting_3.htm

What took the Prime Minister so long?

National environment group, Sustainable Population Australia (SPA) says that comments made by the Prime Minister in announcing the creation of a Population Ministry all but guarantee a skewed outcome for the government’s population policy inquiry. 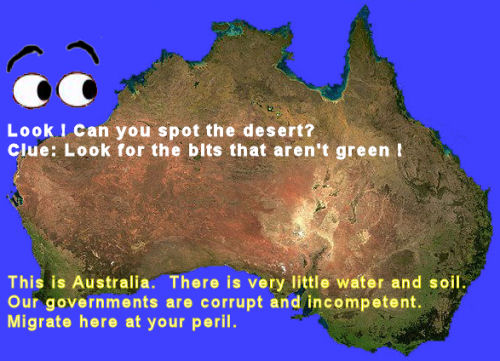 Let’s talk about the national anthem: We do not have boundless plains to share!

Australia’s national anthem is outdated,
incorrect and should be changed according to the environment group Sustainable Population Australia (SPA).

Were Australia a compassionate nation, it would be taking in more asylum seekers and fewer skilled migrants, according to Australia’s only environment group dedicated to lower population, Sustainable Population Australia (SPA).