Events on 26 & 27th August and a report on the 19th of Augst planting at Bayles Street Grasslands.

The admirable tenacity and personal sacrifices of people involved over a long time in fighting the East West Link on the streets and in the courts have finally effected some changes, but the fat lady has not sung yet. The huge Elliott Avenue toll road exchange that threatened the viability of Melbourne Zoo, will not go ahead. Royal Park woodlands near the zoo will also be left standing. What will happen instead is not yet clear and no-one can relax. The East West Link, if it goes ahead in any form, will be a kind of cut-off point for environment and democracy in Melbourne. The huge efforts already expended by the public should have seen the toll way cancelled and forgotten That it survives in some form draws attention to the tragic influence of the growth lobby over our laws and government. (Candobetter.net editorial)

The East-West Link (EW Link) Preliminary Assessment by Geoff Lawler, Director of City Planning and Infrastructure, spells out in graphic terms to Council the wide scale damage to Royal Park likely from the EW Link. It is, therefore, difficult to understand why the City of Melbourne Mayor and Councillors have not apprehended the significance of this report and voted to publically oppose the destruction of the City by the East West Link. Submission from Protectors of Public Lands Victoria Inc. (PPL VIC)

Community Rally! Say 'No' to the East-West Tunnel! Say 'Yes' to Public Transport! 11am Sunday October 13, Corner Brunswick St & Westgarth St, Fitzroy.
- Say no to the $8b government handout to private road companies and yes to real investment in the expansion and improvement
- Save hundreds of local residents homes from demolition or damage
- Save Royal Park for future generations & protect the Moonie Valley Creek
- Protect the Royal Melbourne Zoo

Julianne Bell of Protectors of Public Land Victoria Inc, has approached both ALP leadership contenders on the issue of the East West Link. Albanese OPPOSES the EAST WEST LINK, questions the 'business case' and points to public transport. Despite several attempts no view has been forthcoming from Shorten.

The state government provided a cost-benefit analysis to Infrastructure Australia for the East West link, but it won't be available for public viewing because it's "commercially sensitive"

Rally to save Royal Park from destruction

Final Reminder : Rally "Say No to the East West Link - Yes to Doncaster Rail" Tuesday 20 August 2013 12:45 pm for 1 pm start to 2 pm Steps of Parliament. It is DDay for the future of Melbourne. Our inner city suburbs and our parks - Royal Park, Travancore and the Moonee Ponds Creek- will be bulldozed and destroyed if the juggernaut of the East West Link is constructed, unless we act now.

Included within this article: 10 reasons to say "no" to the East West link toll road

Melbourne residents are now threatened with the complete ruin of the iconic Royal Park in order to build the East West Link at an extortionate cost that will ultimately be borne by road users through tolls and taxpayers. A far more cost-effective and environmentally and socially sound solution to Melbourne's transport problems, the projected Doncaster Railway line, will be precluded if construction the East-West Link proceeds.

Plans to build the east-west link tunnel Melbourne's Royal Park are commencing. The tunnel, which is to cost from $10 billion to $12 billion, is to use vents protruding from the ground to pour motor exhaust fumes into the park. Some of the park will have to be dug up to build the entrance to the tunnel. On Page 8 of the Melbourne Age it was reported that, for the project to commence, eighteen boreholes will have to be drilled into the Royal Park as part of the assessment by the Melbourne City Council as recommended by the city of Melbourne management. If voted for by the council "on Tuesday" (28 May or 4 June?) drilling will commence.

You are invited to the official opening, the inauguration, of "Doyle's Dunny", a new toilet block at the entrance of the Australian Native Garden in Royal Park, Parkville. Iconic vegetation and indigenous and Melbourne Gardens traditions have been set aside for the siting of this enormous new stainless steel super toilet. 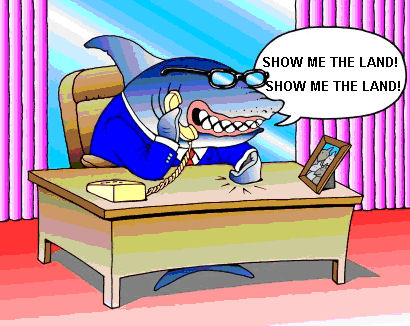 Royal Park Protection Group - the first of many groups standing between you and a total wipe-out of democracy - is having its AGM. Stand up for democracy; be there at the AGM:

A measure of the success of the protest was that it was covered by four TV stations Channels 2, 7, 9 and 10. Channel 3 may be doing a documentary on the opposition to road tunnels. 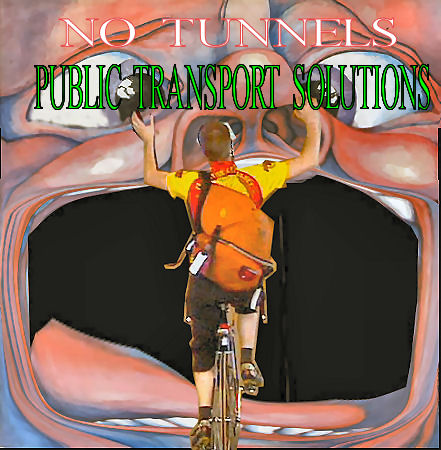 Tomorrow the Royal Park Protection Group (RPPG) and the Yarra Campaign Against Tunnels (YCAT) are, in consultation with resident and environmental groups in the East and West of Melbourne, facilitating a Community Protest for resident, community, and environment groups plus concerned individuals at the Premier's Transport Summit to be held at Telstra Dome in Melbourne.

Opposition to the Brumby Government’s proposed extension of the Eastern Freeway in road tunnels under inner city suburbs, through Royal Park and Holland Park plus the western suburbs has steadily mounted since the Eddington Review was launched. Anger was expressed during June and July at rallies at local Council meetings. Anti-road tunnel protestors forced Councillors at Melbourne, Moonee Valley, Yarra then Brimbank to pass "no tunnels" resolutions. Many community groups were dismayed that the recent Transport Forums conducted by the Government and also by individual Members of Parliament were by invitation only and excluded many interested community representatives. People feel that they have no voice in decisions about Brumby’s Grand Transport Plan.

Rod Quantock of RPPG said today: "The East West Link is in essence a truck city by pass route designed to get freight via the Eastern Freeway and East Link to Dandenong. It will in no way serve commuters as they will not be able to turn off to the City but can only get to the Port of Melbourne or Tullamarine Airport. In the process of tunnel construction over five to twelve years, inner city suburban streets will be destroyed; Royal Park and Holland Park in Kensington will be transformed into giant quarries; and sports fields, community facilities and wetlands ripped up. In addition traffic congestion will worsen and gridlock will prevail. It is extraordinary that the Premier should be favouring building road tunnels at a time when the end of oil is in sight and the public is screaming for improved and expanded public transport. It is tragic that the Premier is considering spending $10 billion of our money on 20th century solutions to a 21th century crisis. Democracy goes underground."

Dr Paul Mees, transport expert and supporter of public transport, commented recently on the Eddington report tunnel proposals: "…the rail tunnel is not needed" and "…the road tunnel is a waste of money." He said that: "We seemed poised to commit the largest amount ever invested in Victoria’s history to dealing with non-problems in a way that will benefit only the vested interests associated with large engineering projects."

RPPG is opposing the construction of road tunnels and is demanding a proper review of the public transport and rail freight systems; remedies for climate change; for the Government to keep its hands off our parkland; and to protect residential amenity. 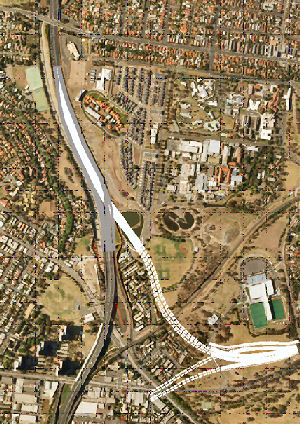