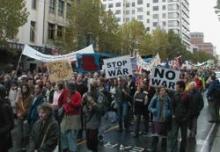 The No AUKUS Coalition, Solidarity Melbourne and Melbourne 4 Assange have organised a public protest at 1pm on Saturday 18 March outside the State Library of Victoria.

Community opposition to the secret deal of AUKUS, dropped on the Australian people one year ago, is evidenced by this petition being tabled today in the Senate by Senator Jordon Steele-John signed by almost 27,000 Australians.

Opposition to AUKUS is also evidenced by the public statement signed by over 1000 people, advertised over the past week in The Saturday Paper and The Weekend Australian.

We, the undersigned, call on the Australian government to terminate the AUKUS agreement with the United States and Britain, and abandon the commitment to buy nuclear-powered submarines for the Royal Australian Navy.

Please share VOICE with organisational members and on your social media platforms. [Candobetter Editor: This version lacks most illustrations. For a full copy email [email protected]]

No AUKUS [1] and IPAN Victoria at Palm Sunday rally this Sunday 10 April, 2.00 pm, State Library of Victoria. No AUKUS Information Table at the State Library. Come to our Information Table, say hello, pick up some flyers and banners. AUKUS = WAR = REFUGEES. Peace, Justice, Environment - No AUKUS!.

This is a neat summary of what informed sources tell us about Russia's aims are and its conduct to date in the Ukraine conflict.

- Monumental foreign policy decisions cannot be made without any public engagement behind closed doors.
- A nuclear-powered submarine fleet will represent a fundamental threat to global peace.
- Aukus cements Australia as a subordinate of the U.S. (Independent Peaceful Australia Network - IPAN)

"The shocking announcement of a trilateral security partnership between the U.S., U.K. and Australia (Aukus), which will be tied to Australia receiving nuclear submarines, is a blow to Australia’s independence and peace in the region.

The security partnership, Aukus, was announced without any public scrutiny or engagement.
While China was not mentioned in the announcement it is clear that this partnership is designed to confront and contain China, in a belligerent and dangerous manner." (IPAN)

A Global Times article by Yang Sheng, entitled “Nuke sub deal could make Australia ‘potential nuclear war target,’ reports Chinese Foreign Ministry spokesman Zhao Lijian told a press briefing that "China will pay close attention to the development of the AUKUS deal. Relevant countries should abandon their Cold War and zero-sum game mentality; otherwise, they will lift a rock that drops on their own feet." (https://www.globaltimes.cn/page/202109/1234460.shtml)

Zhao also said that the 'AUKUS' alliance “seriously damages regional peace and stability, intensifies the arms race, and undermines the Treaty on the Non-Proliferation of Nuclear Weapons.” And that, “Countries should not build exclusionary blocs targeting or harming the interests of third parties. In particular, they should shake off their Cold-War mentality and ideological prejudice.” 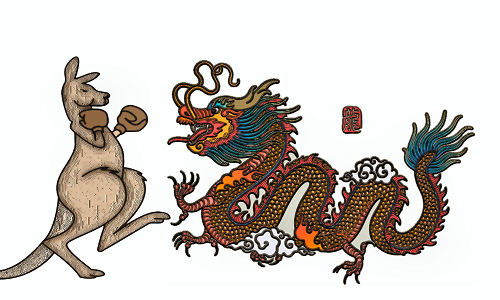 IPAN stated, "Australia’s receiving of a nuclear submarine fleet as part of Aukus will only cement Canberra’s subordination to Washington.

There are also serious practical considerations to having nuclear submarines that received no public consideration.

Australia will be the only country that has nuclear submarines without nuclear weapons and domestic nuclear industry. While Prime Minister Morrison has said the submarines will not necessitate the development of said industries - despite the Government's close relationship to the pro-nuclear lobby - this only highlights our further dependence on, and integration into, the U.S.

Furthermore, this deal will likely see an end to the $90 billion contracts with the French company Naval Group, which marks one of the most egregious wastes of public funds.

During an economic downturn and a pandemic spending on public healthcare, education and public services should be the priority, sinking billions into submarines that will only put Australia in danger is irresponsible."


"Embracing Aukus means undermining Australia's sovereign defence capabilities and contributing to further militarisation of the region. Australia should be working to reduce tensions and promote peaceful relations. Never has such a monumental decision been made with such little consultation and public engagement."

"We have only just withdrawn from Afghanistan, a generation-long invasion that is still causing untold devastation. Without taking a breath we have gone from following the U.S. into one catastrophe to committing ourselves to another."