Comments made against EEG last October have resulted in Minister Peter Walsh stepping back and making a public apology today, 19 March 2014. The apology to Environment East Gippsland was published on his parliamentary website. Peter Walsh is the Deputy Leader of the Victorian Nationals and Minister for Agriculture, Security and Water. 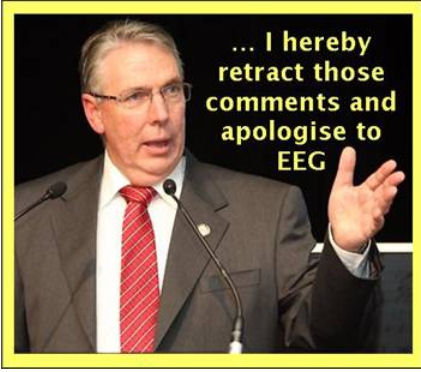 In today’s apology, he retracted those statements.

“In fact what EEG has done is successfully take three legal actions against VicForests and DEPI for their refusal to adhere to state environmental legislation”,

“If VicForests and the government department would simply behave themselves, small community groups would not be forced to sue them for being environmentally recklessness”.

“Minister Walsh said that a ‘major factor’ in the recent serious financial losses of VicForests, was due to our group taking action against them”

“The statements suggested that it was us who wasted tax payers dollars, not VicForests or DEPI, that we have no respect for the court system, and that we have ulterior motives besides protecting the environment.”

It’s been suggested that bills estimated up to $200,000 for this and a previous case against Peter Walsh for defaming another environment group will come out of the tax-payers pockets rather than the Minister’s own pocket.

Minister Walsh shows poor judgement to accuse a one-desk environment group in East Gippsland of being a ‘major factor’ for recent VicForests losses. VicForests logs public forests for free yet has made losses in eight years out of ten. Minister Walsh’s unrestrained comments seem to match the style of a forestry industry without restraint.

On the same day as Minister Walsh published his apology and retraction, he issued a media release that Victoria is to trial processing meat from kangaroo culls for pet food. http://www.peterwalsh.org.au/_blog/Media_Releases/post/victoria-to-trial-processing-of-kangaroo-meat/ This will cause immense anguish amongst groups that have campaigned unsuccessfully for wildlife corridors and the preservation of habitat to prevent kangaroos from being disorganised and forced onto agricultural land and roads.

Retraction and apology to EEG from Peter Walsh

Thank-you for your article. I tried to read the wording of Walsh's apology on his blog, but it has been removed. is there any chance that you have the full statement and could you make it available here? - EEG supporter

Have a look at the front page of Environment East Gippsland here: http://www.eastgippsland.net.au/. There is more there. If not enough, suggest that you contact Jill Redwood via those pages. Thanks for your interest. :-)