This is not business, it's serious: Toscano and Ely's Melbourne Mayoral Campaign

Today, Wednesday 3 October, Dr Joe Toscano and Dr Jean Ely launched a colourful campaign against a backdrop of Spring flowers outside Melbourne Town Hall. (Video-link below) They made the point that the other 8 candidates campaign as if Melbourne were a business proposition and neglect the 40 per cent of votes that come from non-business people in a uniquely skewed electoral system where some businesses get two or three votes. This vast electorate includes Carlton, North Carlton, Flemington, Kensington, South Melbourne, East Melbourne, Docklands, Parts of South Yarra and West Melbourne. Most public housing is located there but there are many homeless. There are a lot of children but public schools are rare. 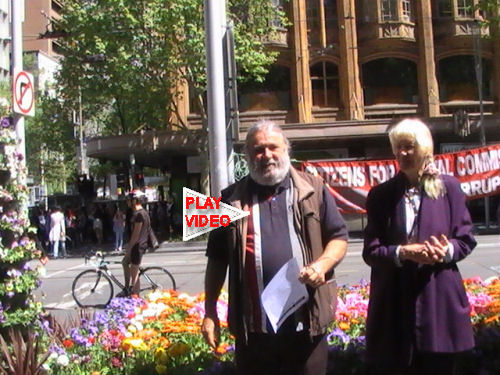 Dr Joseph Toscano began the launch by stating that this is a serious campaign for the Lord Mayor Election and the theme is, "Putting Public First."

He said that other candidates talk about running Melbourne as a business, but Melbourne is a community. It is a community of over 200,000 people, with 102,000 on the electoral role. It includes the CBD, Carlton, North Carlton, Flemington, Kensington, South Melbourne, East Melbourne, Docklands, Parts of South Yarra and West Melbourne.

The election should not be about running a business. It should be an election about people, about cities, about how people collectively and individually resolve the problems of having so many people in such a small area - four million in this city.

"We are standing to promote, protect and extend public housing and public schools in the city of Melbourne," said Dr Toscano.

And, "Listening to this election you forget that most of the public housing estates are in the city of Melbourne: North Carlton, Carlton, Flemington, West Melbourne, Kensington. Thousands of people living in public housing."

"The second thing is that we are not interested in running the city of Melbourne as a corporate focused city. We want to see the development of an alternative economic system based on cooperatives and collectives, which provide secure, sustainable employment and goods and services for the people of Melbourne. We are not interested in the people having part-time, poorly paid work. We want people to be self-sufficient, to work for themselves, and share the wealth which they create. We would like 10 per cent of the city's revenue to be diverted to provide seed funding to set up collectives and cooperatives, to set up a alternative economic system based on the satisfaction of real, not manufactured, human needs."

Because you do not need billions of dollars to survive, live or prosper. What you need is secure, safe, sustainable employment. 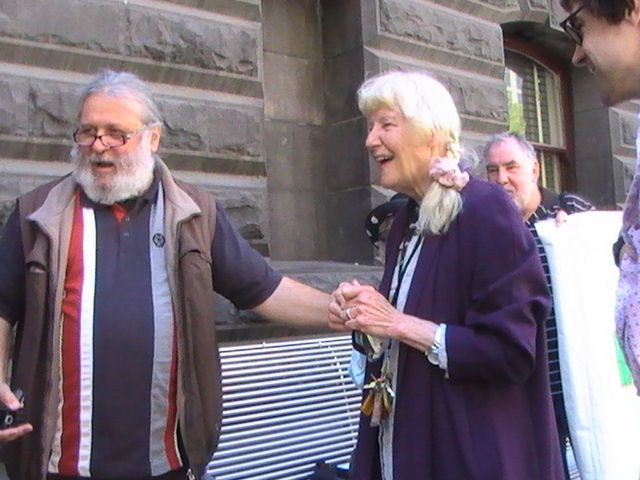 Thirdly, some of the richest people and corporations live in the city of Melbourne. Everyone else is talking about reducing rates. We want to double rates for properties worth more than $10m and we want to quarantine the money raised to tackle the perennial problem of homelessness in Melbourne which is swept under the carpet on a year by year basis. We want to use the money to assist the 40 per cent of people who live in the city of Melbourne, who rely on social security benefits to survive. 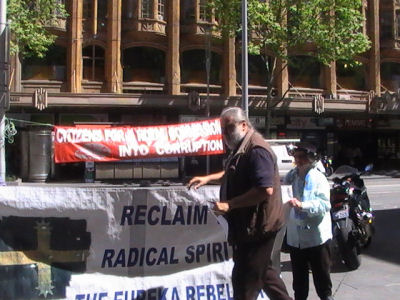 Fourthly, since the last election Dr Ely and myself have been fighting - along with hundreds of other people - for the establishment of a significant monument for Tunnaminnerwait and Maulboyheenner, two indigenous freedom fighters who were executed on the corner of Bowan and Franklin Streets on the 20th of January 1842. Not just as some hsitorical monument, but as a gathering place for indigenous and non-indigenous Australians to learn about the city's unwritten history and to become involved in the struggle to finish the unfinished business that exists between indigenous and non-indigenous Australia. We se this as a tangible way of actually promoting that struggle of kick-starting the stalled reconciliation struggle. We would like to see the whole area with grass, get a monument there, where peple can go and talk and learn about the history. 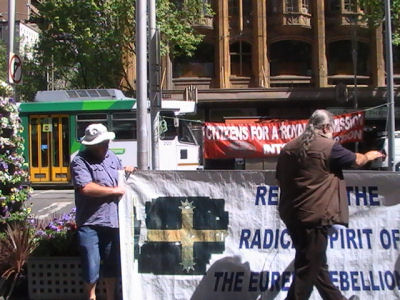 Lastly, want to see City Square renamed "Human Rights Square" to acknowledge the forceful eviction of Occupy Melbourne by police after getting the nod by Premier Baillieu and the Lord Mayor Doyle from that place for peacefully raising the idea that wealth and power should be redistributed.

Obviously we have many other ideas, but these are the five major ones.

Now, why are we standing? Very simply because this statement will be sent to every elector on the Melbourne electoral role, courtesy of the Australian Election Commission, where people can also read the stuff the other candidates put up like, "we want more parking, more or fewer roads ...."

Because we face difficult times, especially young people, because we are moving from a time of relative abundance to scarcity, as Greenhouse increases, human activity increases, as finite resources are used to manufacture goods we do not need to increase company profits and economy is dominated by economically based on the creation of ever more profits irrespective of social and environmental costs, we find that we need radical solutions.

Call to work around the corporate media by using social media

It is very interesting that apart from the local and community media, there is no media here today, despite the fact that we sent over 1000 emails and even some letters.

You are not going to get the government-gelded ABC or the corporate-owned media talking about a public campaign of putting public first. It is unattractive in a corporate dominated world. For us to get any traction we need people here to go to our website at www.anarchistmedia.org, to download the material, send it to your friends, use it for bloggling and in the social media sphere to promote the campaign.

Our statement cannot be beaten. It is a black caviar statement. It is miles ahead of what you will see elsewhere. 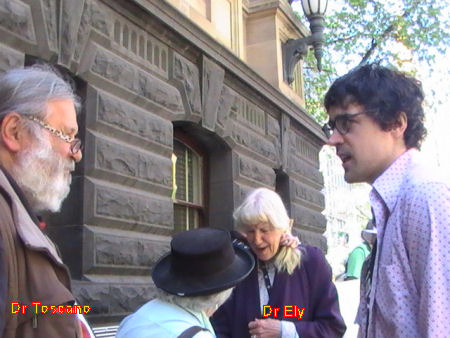 Over the next three weeks I will be debating my colleagues about these issues, but we have two options - we come last out of nine candidates or we come fourth or fifth or third with your assistance on the social media to show people that there is support for ideas, not personalities.

Dr Ely spoke on the issues of Public Housing and Public Education. She said that there is a lot of homelessness in the electorate, adding that Mayor Doyle had been very quick to take a photo-opportunity with the homeless but that he had actually done nothing about them. She said that Joe and she were determined to give them a voice. She also wanted to encourage people to put more and more pressure on the state government to restore public schools which had been closed under Premier Jeff Kennett. She mentioned that West Melbourne school had been given to the Salvation Army by Jeff Kennett in 1993. "We want it back," she stated. There are children in this city who need government schools."

"That's why we want to campaign to raise rates on properties worth more than 10m," said Dr Toscano.

Dr Ely concluded by saying, "We are the future. We will have to leave the others to wander off into the past. The Fourth Estate is now on the ropes. The Fifth Estate is the Social Media."

Dr Toscano will be debating other candidates (with the exception of the current Lord Mayor, Mr Doyle, who apparently does not debate other candidates) at the Wheeler Centre on 16th of October between 6.15 and 7.30pm.

The City of Melbourne has a very odd voting system where some businesses have two or three votes and it is slanted 60/40 in terms of business votes in relation to residents' votes. It is the only place in Australia where people have multiple voting legally. This system was created was to ensure that somebody from the business community would be Lord Mayor. This is also the only mayoral election where the mayor is elected by the people. In every other city the mayor is appointed by the councillors. The Melbourne system was designed to give the mayor a bit more power than other mayors to promote business interests.

All power to Dr.s Joe Toscano and Jean Ely

This campaign is very courageous. At the very least it highlights the crazy system that exists in the City of Melbourne. As we know it is members of the establishment who normally get to wear the mayoral robes. The Toscano campaign highlights the issue of homelessness which is a result of unaffordable housing from too many people coming to live in the city of Melbourne. I heard yesterday that in the next 10 years , Melbourne must accommodate an additional population equivalent of the whole city of Adelaide! This madness must stop. On a palliative note, yesterday looking up at the rooms above Flinders Street Station. They have an empty look which prompted the thought that how wonderful it would be if they could be turned into accommodation for marginalised people.